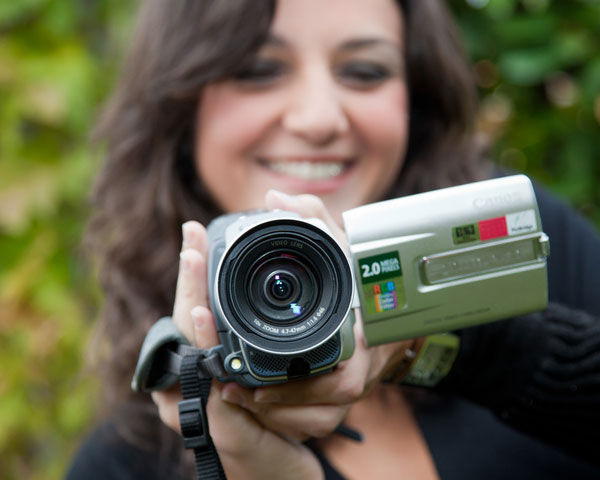 There is an attitude that the camera is "The Grail" that will allow their talents to shine. That is not entirely untrue, but often times they forget that the guys that use those cameras spent years developing the skills needed to take advantage of those cameras possibilities. Every professional will tell you – there is no one-size-fits-all in videography, filmmaking, commercials or any other medium. So what does that mean for you? Well, certainly, it depends on your level of shooting and the content you are creating, but it also means you'll need to find a camera that offers the options and features that you want and will use for a price that is within your budget range. Sound about right? I thought so. So, here are a list a cameras that will cover your bases and not leave you broke. If you are a filmmaker, you will have plenty of time to be broke later, but that is a topic for another article. Let's get started.

This handy little guy is a lot of power in a tiny package. At less than a half-pound, this camera is incredibly portable and can be hand held all day with little to no problem. Yeah, yeah yeah, but how does it look? Ok, fair enough. The V100M shoots 1920×1080 progressively using Advanced Video Codec High Definition (AVCHD) at 17Mbps. Now this data rate is about half of standard Bluray, but is more than enough for burning DVDs and infinitely higher than your will need for online video. The V100M is a fixed lens camera, so, you won't be investing in expensive lenses and costs associated with that. Now, with that lens you get a 34x optical zoom with a feature called Intelligent Zoom (iZoom) that expands the zoom to 42x without loss of quality. Need to get further? Then use the 2000x digital zoom. Beware though, the digital zoom starts to show a degradation in image quality.

The PJ580V is similar in size to Panasonic's V100M making it portable and light. It also shoots at full HD 1920×1080 at 24 frames per second to provide the "filmic" look that is so popular in video production. This Sony camera may get over looked because of it's price tag, but it has something none of the others in this selection has. "What's that", you ask? It has a built in projector that can project on a screen up to 100. This is great to review footage that you just shot and it works surprisingly well. So how about some bells to go with that whistle? The built in 32 GB of memory allows for 11 hours of footage capture which means, if you have a couple batteries, you can shoot all day without stopping. Not enough? OK, one more. The HDR-PJ580V also has a built in Dolby digital 5.1 audio recording microphone setup. Ordinarily, this author would never suggest capturing audio with an onboard camera, but this is a pretty cool idea and pretty fun to use, especially if you have a home surround sound setup.

This camera is the first of the DSLR style camera on the list. I say style because the DMC-GH2 is a mirror-less camera. Mirror-less offers a benefit in that they are generally smaller and lighter than their DSLR counterparts. The drawback is that the viewfinder isn't seeing what the lens is seeing, which won't affect most users during normal operation. This camera has 16.5 MP for quality image capturing. But it's real hot point is that the sensor is capable of capturing 1080p video at 60 or 50 fps progressively. Although the camera outputs at 60i or 50i, the quality should still remain high and who knows? Panasonic may release a firmware update that makes more use of that feature. In either case, having the higher frame rates will allow you to make slow the footage in post for cool slow-motion effects.

The K30 is a great way into the DSLR video world. It shoots 1080p30 HD video features h.264 compression. Compression… What's that? With an infinite number of light points and colors in the world, the camera must capture as much as possible with out filling your memory card with data. That's where compression comes in. It packs down the information tightly to keep things contained. Ok… One of the features of this camera that is so appealing is it's rugged cold weather design. Offering usability down to 14° F. This is great for climates more harsh than standard summertime shooting. Additionally, ISO speeds up to 12,800 (expandable up to 25600 with firmware upgrade) allows for more latitude when shooting in low light scenarios.

This camera is a monster in tiny package. By far the smallest physical size in the list. The NX1000 boasts several feature that none of the others can. A giant 20.3MP sensor is great for taking video of high quality at 1080p is 30 frames per second. A note here… This camera does offer 24 fps option at 1920 × 810. Before you ask… No this isn't a standard HD resolution. It would be most closely look like a widescreen movie or 2.39:1 aspect ratio. Another significant feature is instant sharing via Wi-Fi. This is great for those who create single shot videos for the web. Whether it is Vlogging or On-the-Scene videos, this camera makes it easy. You want more? Ok, as stated the camera is the smallest in the group; about the size of a point-and-click digital camera, but Samsung has created a whole series of lenses that work with with the NX1000 to give you more shot selection. Finally, since every videographer is as different as every camera, this one comes in Black, White and Pink. That must help, right?

Sony's entry level DSLR camera is no slouch. Without the projector of it's brother PJ580V, the cost is significantly less. That's not to say it doesn't have it's advantages. The A37 uses AVCHD 1920 x 1080 at 24p and 60i with H.264 compression. A great feature on the A37 is the flip out monitor that will allow you to hold the camera at just about any angle get a clear view of the screen. Another feature that seems to be a benefit to many people who may be new to DSLR videography is the Superior Auto Mode. But the main benefit is that lenses used for this camera are compatible with some of the higher end cameras as well as some of the discontinued earlier models, in case you may already have a Sony camera that you are upgrading from.

The major benefit to this camera is there are A LOT of them. If you have questions, it is likely that you know someone who can answer questions that you might have, as well as, a whole host of online resources. Why is this camera so popular? No doubt, you have already heard of Canon's flagship DSLRs the 5D and 7D. If not, that's ok too. The T3i can be called the little brother to these cameras and most closely related to the 7D. It offers slightly less in terms of processing ability, but to be quite honest, when video footage is compared very little difference is noticeable. This is because it's sensor (digital film) is the same. Because this line of cameras is so popular, Canon and many OEMs have created an extensive list of accessories to expand it's functionality.

All of the cameras in the list have some serious features that can really be a benefit to your projects. And, at the under $1000 price point any one of these could be your next camera and get you shooting right away. A little secret for you… Most of these can be found at some of the larger electronics retailers, so you can put your hands on them and try them out to see which features you like and will use before buying. Additionally, The prices listed are MSRP*. So, remember to do your research to find the best deal. Many of them are available in kits that include important accessories.

*(The camera's with removable lenses MSRP was for the camera body and no lenses. So be sure to include lens costs when planning and again look for package deals.)

Steve Everson is is an award winning film and video producer with extensive experience in pre-production, production and post-production.