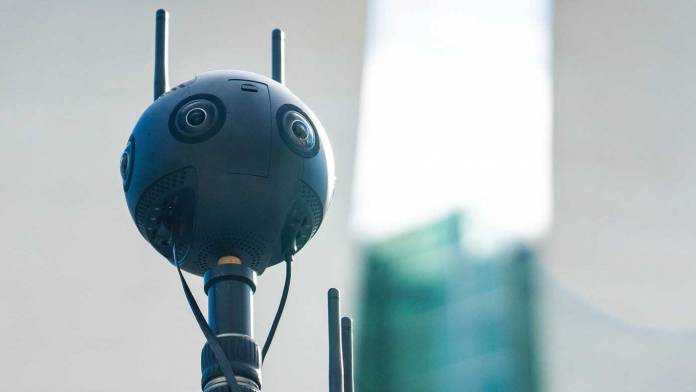 So, you’ve decided to take the plunge into the spherical video market. That’s great! But where do you begin to select a camera and a format? There are dozens of cameras to choose from; what should you look for? We’ll go over the most important factor in choosing a 360 video camera at the end of this article. But first, let’s take a look at our favorite cameras currently on the market.

The Insta360 ONE is one of the most feature-rich 360 cameras out there for under $500 bucks. It’s comparable to the Ricoh Theta V. When it comes down to it, a 360 camera without 4K support isn’t worth buying. Lower than 4K resolution and you’re left with video that lacks sharpness and detail. Luckily, the ONE sports 4K UHD video at up to 120 frames per second, making its video immersive enough for viewers to not be taken out of the 360 experience. The ONE can also live stream in resolutions up to 4K.

Being the successor to the GoPro Fusion, the GoPro Max features dual 180-degree lenses. it shoots 1440p 60 fps video with a single lens and 5.6k 30 fps spherical clips. For photos, the Max’s lens shoots 16.6-megapixel 360-degree photos, 5.5-megapixel 4:3 shots all from one camera. Additionally, the camera can shoot 270-degree 6.2-megapixel panoramic photos.

The Max does sport a front-facing display, making it a great for content creators who want to vlog or to start vlogging. You can also shoot the camera’s time-lapse videos in 360. The GoPro Max is a very accessible camera, featuring practically the same design as previous GoPros.

It touchscreen’s menu system is identical to the Hero 8, though it’s slightly smaller. The camera is waterproof up to 16 feet, but GoPro has said it isn’t meant for underwater use. Also, the Max’s audio capture is impressive, being able to correct even during fast winds. All in all, the GoPro Max delivers quality video and saves you money.

Buy it on Amazon

The Pro 2’s 3D mode captures video at up to 30 fps in 8K — or 120 fps in 4K. The camera can also shoot in a ‘monoscopic’ mode — a non-3D mode — to capture 8K video at up to 60 fps. The Pro 2 can also impressively live stream in 4K 3D and at the same time record in 8K. The Pro 2 uses an “ultra-precise” gyroscope that tracks motion on nine axes. Insta360’s software then uses that data to stabilize the shot using Insta360’s FlowState stabilization technology. Built-in Farsight tech provides a “high-definition, low-latency” video stream for long-distance previewing. This means that you can control the Pro 2 at a distance; you won’t have to be in the shot to get the shot.

Additionally, every time you hit record on the Pro 2, it records a low-res proxy version of the scene alongside the full-quality version. It also features four built-in mics to capture 360 audio and has a pair of USB and 3.5 mm audio inputs. There are six MicroSD card slots for each camera, allowing the Pro 2 to record at the maximum possible bitrate. There’s also room for a full-size SD card that captures stabilization data and low-res proxy files.

Buy it on Amazon

How do you choose?

The first thing you’ll need to consider in order to choose the most appropriate camera is where and how your video will be viewed. Ask, “How is this video going to be seen?” Currently, YouTube, Vimeo and Facebook are simple and popular choices for distribution. However, there isn’t yet a standard format for these videos, like NTSC, HD or UHD.

In addition to deciding where your video will most likely be posted, you’ll also need to think about how you expect your viewer to watch your 360 video. Will they use a headset or simply watch on a desktop display, clicking and dragging to pan around the image? These are two different viewing experiences that have different requirements in terms of image quality and sound design. The less immersive desktop viewing experience is more forgiving. However, you’ll want the best possible quality for both audio and video if your viewer will use a headset.

Most cameras will interface with an app on your smartphone for operation but will require a desktop for post-processing. A growing number of smaller dual-lens cameras have internal stitching, so you won’t have to mess with any external software. Current models also typically allow you to live stream to Facebook and YouTube. But while internal stitching is convenient for social sharing, stitching on a desktop will almost always give you better results.

Digging into your workflow and distribution needs will establish a starting place for your 360 video camera search. Knowing what you want to do with your 360 video will give you a more informed perspective when considering other factors like resolution and form factor.

Resolution is a rather straightforward concept in traditional video, but in 360 video, having multiple sensors capturing a complete image sphere that will often be viewed at very close proximity makes the issue of resolution a bit more complicated.

Spherical cameras use two or more independent lenses to create the final image. Obviously the higher the resolution quality for each camera, the better your final image will be. There are a number of units out there that boast 4K, 6K and 8K resolution. That may be partially a misnomer. As you combine images in the process called stitching, you are naturally creating a larger image. What’s called a spherical 4K image is not the same as a 4K flat image since at any given time, your viewer will only be able to see part of the 4K image sphere.

What’s called a spherical 4K image is not the same as a 4K flat image since at any given time, your viewer will only be able to see part of the 4K image sphere.

You can look closely at the specs for each individual sensor to better understand the camera’s actual resolution, but all you really need to know is that a 360 video camera that shoots 4K is not as impressive as it sounds. In reality, 4K is the minimum resolution you should look for in a 360 camera. If you want truly professional results, look for an 8K camera.

The more lenses a unit has, the better the quality will be at each viewing angle. For example, we have all seen how a fisheye lens distorts around the edges. If you take just two wide angle lenses and stitch together the image, there will be some distortion at the edges. Stitching software can do a great job of cleaning up the distortion, but if there are, say, four cameras or more cameras, the image will be much cleaner. More lens-sensor pairs can also mean higher total resolution, leading to a more immersive experience for your viewers.

You’ll also find that the fewer lenses there are in the camera, the less detail you’ll get in the upper and lower extremes. This is not necessarily a bad thing, though. Most action of the action won’t take place in those directions. If you don’t want your audience looking in that direction, there’s no need to waste resources capturing that space.

However, while using a camera with more sensors and lenses will give you an advantage in terms of image quality, it can also seriously bog down your workflow. More sensors mean more data to deal with. That could become an issue depending on the capabilities of your editing system. Keep your overall workflow in mind as you shop. Do you need to be able to stitch your image together quickly, or even in-camera? You’ll have better luck with a dual-lens camera. Have the time and hardware to render out a more complex stitch? Consider options that will give you a cleaner stitch and more resolution.

Most 360 video cameras you encounter record in 2D.Some, however, capture 360 video in stereoscopic 3D. This gives the image more depth and makes the viewing experience feel more natural. However, there is still a big difference between 3D 360 video and true virtual reality. VR allows viewers to move through and interact with a scene. Viewers watching 3D 360 video are still tied to the camera position you chose for them, but the overall experience will be more immersive.

If your video will be viewed using a headset, you’ll want to consider how your audio will be captured. The best option for professional 360 work is a dedicated spatial audio capture setup. This will give you the most control and the best audio quality.

In more casual shooting scenarios, you can get away with using the camera’s built-in mic system. 360 video cameras will often use multiple microphones to capture spatial audio that aligns with the image sphere for a more immersive final product. If you don’t plan to record audio separately, make sure that the audio the camera captures will be sufficient.

While the core functionality is similar across most 360 video cameras, there are some special features that can set a camera apart. These often expand the camera’s capabilities or make it easier to use, but sometimes they just make it more fun.

Image stabilization is a big one, especially since 360 video is known to cause motion sickness in some viewers. A shaky image will only make this worse. Other features to keep an eye out for include automatic mount removal and additional shooting modes like time-lapse or bullet time. Real-time previewing is another feature to look for. It will come in extremely handy when you are trying to compose a shot with any kind of intention.

The spherical video market is just exploding with possibility but it’s always best to do your homework before you buy. Look at test videos online for each camera and search YouTube 360 to see what other people have done. Look before you buy, and if possible, give a camera a test drive in the conditions that you’ll be shooting. 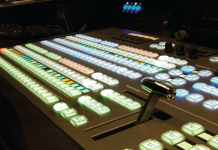 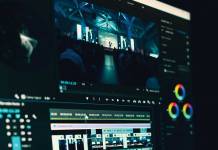 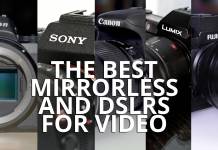 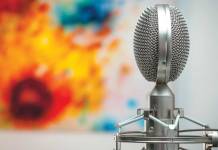 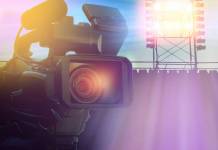 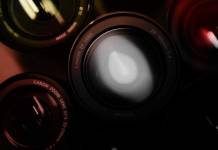