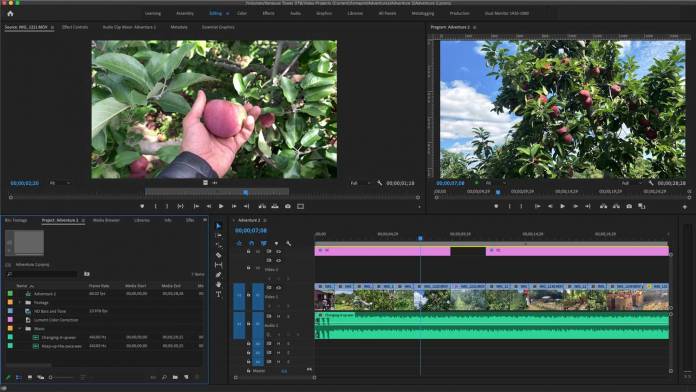 In Premiere Pro, you can edit raw footage in any video format and easily apply editing techniques to achieve the director’s vision.

On the other hand, in After Effects, you can create cinematic movie titles, intros, explosive effects, work with particles, keyframes and expressions. Honestly, there’s nothing you can’t make with After Effects.

The question is, what is the difference between the two? Should you use them separately, or together? We will do an after effects vs premiere comparison so that you may better understand when to use these two programs.

Premiere is used to put together all the raw footage you recorded and edit it according to the project needs. In Premiere, you will be able to build the entire sequence of your project to tell a story. You can use several editing techniques to accomplish your project vision, but you will always end with a render video/film of your production—an end-product.

With Premiere, you can create productions such as short films, full feature films, documentaries, web shows, interviews and many others. However, most productions mentioned before are better suited for Premiere Pro rather than its basic counterpart Premiere Elements or Premiere Rush.

You see, Premiere Pro is for advanced video editors who need powerful editing tools, while Premiere Elements is a beginner level video editor to make videos quickly with limited functionality. Premiere Rush is more suited for mobile users who want to make quick videos for social media. It would be best to decide which version is better suitable for your needs and go from there.

However, keep in mind that although all versions of Premiere excel at video editing capabilities—especially the Pro version—they are not ideal for creating motion graphics animations. That when After Effects comes in, giving you full capabilities and motion graphics options.

More about Adobe After Effects

There is nothing you can’t do with After Effects. It even has some 3D modeling capabilities by using the free installation of “Cinema 4D Lite.” Keep in mind that although it allows you to use 3D objects and manipulate them After Effects is not the right choice for advanced 3D animations. Yes, you can do cool 3D stuff but is not what After Effects was created for. It excels at motion graphics, compositing and animations. You will be able to do incredible creations in those areas.

Should you use both After Effects and Premiere Pro?

Using both Premiere Pro and After Effects for a project allows you to create any video production you can think of. The possibilities are endless. With Premiere Pro, you will have all the video editing capabilities to craft an incredible sequence of videos. Inside that sequence, you can add as many After Effects animations as needed.

Look at it this way, in Premiere Pro you create the structure of your project, while After Effects brings all the beautiful and exciting overlaying graphics that will enhance your production quality. Thay why using both software in your production is highly recommended for almost every situation.

If you will be using both Premiere Pro and After Effects together, you can use Adobe Dynamic Link. This feature allows you to change the original assets without rendering and exporting your work from one application to another. This workflow saves you disk space and time working between projects. Keep in mind that the more complex the After Effects composition, it will require additional processing time to apply the actions and make the final data available to Premiere Pro.

Suppose you would like to edit something from the After Effect composition. In that case, all you need to do is select the composition from the project panel > right-click > edit original and make the appropriate changes in After Effects. After saving the project, the changes made in After Effects will automatically appear in the Premiere Pro. Here’s a video of Adobe Dynamic Link in action:

As mentioned before, if you work with complex source compositions, you may need to add more RAM or a faster processor. Check out, “How much RAM do you need for video editing?” for details.

After effects vs premiere—when to use them separately

When to use Premiere only

You can use Premiere only when you need to produce something quick or edit something simple. We recommend using Premiere Pro for advanced production sequences along with After Effects animations. However, it might benefit you to use Premiere Rush for short interviews—such as one-shot talking face without any B-rolls or supplemental graphics—editing screen recordings tutorials and mobile phone video edited on the Abode Rush IOS app.

When to use After Effects only

Using After Effects and Premiere Pro with Adobe dynamic link is ideal when working with complicated projects. However, if you see yourself reusing multiple animated assets, you can create them in After Effects first, render the videos and reuse them in future productions. It is especially useful with Premiere Rush because you can make an epic motion graphic animation in After Effects, export it and import it to Adobe Rush to reuse it on the go in the mobile app. Some of the assets that can be created for this can be lower thirds, fixed titles, logo animations and intros/outros.

It all comes down to what you want to accomplish

Having a robust video editing software like Premiere Pro and a behemoth powerhouse for motion graphics like After Effects will allow you to accomplish anything you desire in your videos or film productions. It’s crucial to learn how to use both software correctly, so here are a few resources available for more information:

There are also other Videomaker resources you can check out: