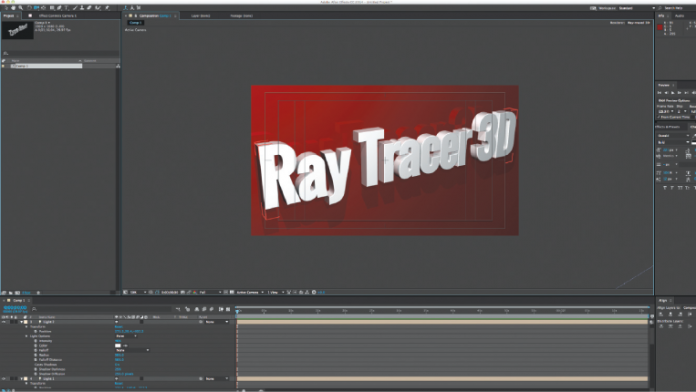 Many After Effects users are adept at using the software package’s ability to animate elements in 3D space, but more often than not, it’s what is referred to as 2.5D. 2.5D is the use of flat, two-dimensional elements in three-dimensional space. The resulting animation gives the illusion of depth because of parallaxing and a consistent perspective throughout the composition. A little used function of After Effects is its ability to create and animate true 3D objects, objects that possess height, width and depth. After Effects is able to render true 3D objects, light and shadows through a process known as ray tracing.

Ray tracing is a computational method of rendering an image that is composed of virtual three-dimensional objects. It works by simulating rays of light, projected from a virtual light source, onto the virtual scene. The image is rendered by computing, or tracing, the way the rays of light interact with the scene. This includes occlusion for shadows, reflections, refractions and bounced light. The resultant image is an accurate portrayal of how the scene may appear in the real world, contingent of course that the scene is setup accurately. The disadvantage of ray tracing is that it takes a great deal of computing power to render an image. When multiple animated objects are built into a scene, with multiple light sources, as well as a virtual camera, the rendering process can take an extensive amount of time. This is why ray tracing is best suited to video applications and processes that can allow for rendering time, but is not suited to uses that require real time rendering, such as video games.

After Effects is able to render 3D objects, light and shadows through Ray Tracing


Adobe After Effects performs ray tracing when the software is setup to do so. Ray-traced 3D, as it is known in After Effects, allows you to extrude text and paths. Extruded layers have z depth to them, meaning they are three-dimensional, not two-dimensional elements in 3D space. When extruded layers are rotated there are faceted sides viewable at all angles. A two-dimensional, non-extruded layer, in 3D space has zero depth on the z plane, making it disappear when rotated 90 degrees on the x or y axis. Currently, After Effects is not able generate volumetric platonic solids or other modeled solids for its ray-traced 3D renders, but it doesn’t need to — those capabilities are better suited to true 3D animation packages.

Ray-traced 3D compositions in After Effects allow you to generate and place multiple lights, define how shadows are cast and set material options for 3D layers. These parameters, as well as the layers themselves, can all be animated.

Adobe After Effects is set up by default to animate objects in three-dimensional space, but this default setting does not do ray tracing. A composition can be set up as a ray-traced 3D composition by opening the Composition Settings panel and, under the Advanced tab, selecting Ray-traced 3D from the “Renderer” option menu, instead of the default Classic 3D.

A layer becomes a 3D layer when the 3D checkbox in the timeline, the one marked by a cube, is checked. A 3D layer in a ray traced composition has more options than a normal layer. When the layer properties of a 3D layer are opened in the timeline, you can access the layer’s Geometry Options, as well as Material Options. The Geometry Options allow you to select the extrusion depth of the layer and can add a bevel to the shape’s edges if desired. The Material Options define how the layer interacts with lights. This includes casting shadows, accepting shadows, reflections, specular highlights, transparency and refraction.

When To Use Ray-traced 3D

One of the strengths of ray tracing is that it simulates the behavior of light, because of this, you can generate realistic shadows and reflections, both of which can be used creatively to stylize some stunning motion graphics. The sliding glass panel effect remains popular in broadcast graphics and can be achieved in After Effects.

After Effects doesn’t provide a solution for all 3D needs and sometimes it’s best to leave After Effects and use another application to create 3D animations. Programs such as Cinema 4D, Maya and 3D Studio Max are better suited to handle custom modeling, true 3D particle systems and character animation.

Tips for Working in Ray-traced 3D

Ray-traced 3D compositions are easier to work in if the project is set up to use minimal computing resources. These settings can then be changed before the final render to insure the best quality output. In the Composition Settings panel, under the Advanced tab, is the Options button; it opens the Ray-traced 3D Renderer Options panel. There are two settings here to adjust. One is the Ray-tracing Quality. It is best set to as low a number possible while building and animating a scene and then raised to higher number for rendering. The other option is the Anti-aliasing Filter pull-down menu. It’s quicker to work with anti-aliasing set to “None” or “Box” and then change to “Cubic” for the final render.

3D animation isn’t an unattainable goal for the After Effects user. It’s a viable solution that’s a full component of the After Effects post-production pipeline. The tools are there to create stunning 3D visuals, whether it’s a title of gleaming glass text or a composition of concentric 3D shapes  collapsing over an extruded metallic logo. Ray tracing and Adobe After Effects greatly increase your video editing and motion graphics capabilities,  if you decide to try your hand at 3D animation.

Sidebar: Other 3D Solutions for After Effects

After Effects’ Ray-traced 3D has its place and can facilitate the needs of many video editors. However, there are animations that require more extensive 3D modeling and rendering. Fortunately for the After Effects user, there are several options available that fully integrate with After Effects and the Adobe post-production workflow.

Element 3D is an After Effects plug-in from Video Copilot. Element 3D is built for motion graphics work and visual effects. It takes advantage of OpenGL to use a computer’s GPU for fast rendering. It is also capable of ray tracing by using OpenCL. Ray tracing produces more accurate and detailed lighting and shadows but does take longer to render. Video Copilot supports Element 3D with an ever growing list of tutorials and add-ons.