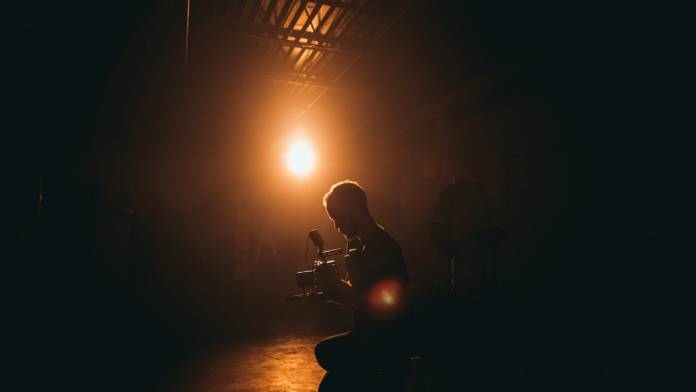 When it comes to cinematic lighting techniques, “Mars Attacks” (Tim Burton, 1996) is rich with examples thanks to its campy approach to the sci-fi genre. Since camp films tend to amplify established cinematic tropes and conventions, they turn out to be surprisingly useful learning tools. Let’s take a look at some of the fundamental lighting techniques for film and video through the lens of this classic.

Three point lighting is at the core of nearly every other film and video lighting technique. If you understand this basic concept, you’ll have a much easier time achieving the lighting you want for any scene.

The basic three-point lighting setup include three components: the key light, the fill light and the back light. Let’s dig into each element and see how it is applied in our shot of Pierce Brosnan here.

The key light is the main lighting source for the scene. It’s job is to illuminate the subject so that audience can see what’s going on. In our example, the key light shines onto Brosnan’s face from screen right.

In this example, the fill light from screen left is only slightly less intense than the key light. The setup strikes a good balance of defining Brosnan’s features without excess contrast.

The back light is the final piece in the three-point lighting puzzle. It’s job is to separate the subject from the rest of the scene. The window directly behind out subject serves as a backlight in this scene, giving Brosnan a crisp outline.

Now that you understand three-point light, we can explore different ways to adjust each light for new and interesting results.

Hard lighting refers to lighting setups that create strong definition between light and shadow. In this shot of Jack Nicholson, hard light reveals deep wrinkles both in Nicholson’s furrowed brow and his rumpled shirt. It emphasized the anguish in his face as he realizes the full impact of the Martian invasion.

Compare the two shots above. The hard lighting in Nicholson’s shot emphasizes worry and confusion, while the soft lighting on Glenn Close allows her wide-eyed shock to take centerstage.

This softer lighting style follows Close’s character throughout the film. In this second example, the lighting technique provides a comical juxtaposition as Close delivers the tough guy action-hero line, “Kick the crud out them!”

Bounce lighting offers a great way to achieve the soft lighting technique. With bounce lighting, a diffused key light is bounced back toward the subject off of a reflector or other light colored surface, such as an adjacent wall.

High key lighting is bright and up beat. It generally denotes a positive or optimistic tone. This type of lighting puts the audience at ease since nothing in the frame is concealed in shadow. In this shot, the world looks on optimistically as the Martian’s arrive at Capitol Hill, unaware of the imminent destruction.

Low key lighting describes an overall dimmer scene. This lighting technique leaves pools of shadows to keep parts of the frame hidden from the audience. It’s perfect for establishing both literal and figurative darkness in a scene.

The low key lighting in this scene aboard the Martian space craft emphasizes both the mysterious nature of the flying saucer and the dark intentions of its inhabitants.

Chiaroscuro lighting, also known as cameo or side lighting, is a staple in film noir and other kinds of gritty dramas. It highlights a single subject against an otherwise darkened background.

In this example, a strong key light highlights Brosnan’s left eye while his the rest of his body and the background remain in relative darkness. The lighting technique undermines the optimism of Brosnan’s line, “I suspect they have more to fear from us than we from them.”

Three-point lighting setups can feel rigid in the studio, but you can add interest to your lighting setups be integrating ambient light sources. Ambient or available lighting refers to the light sources that are already present in your scene. These can be broken down into two general categories: natural lighting and practical lighting.

Natural lighting refers to any setup that uses the sun as a primary light source. This shot provides a lovely example of natural lighting, where light from the window gives the scene a wash of soft illumination.

This kind of lighting is similar to natural lighting in that it makes use of light sources already in the scene. Practical light refers to an artificial light fixture that appears on screen. In this example, the illuminated map behind Rod Steiger provides ambient light in the underground war room. The map serves as both a striking set piece and functional light source throughout the film.

Closely related to both natural and practical lighting technique is motivated lighting. This technique seeks to imitate or enhance ambient light sources to better serve the story. This shot of a Martian infiltrator attacking the president in his bed gives us two examples of motivated lighting.

First, since the scene takes place at night, the lighting in the shot suggests moonlight as the primary light source. Actual moonlight wouldn’t be sufficient to expose the scene properly, so the filmmakers likely used other techniques, like day-for-night shooting, to give that impression.

Second, the bright light of the laser pistol serves as a secondary source of illumination in the scene. Without that extra light, the scene wouldn’t make visual sense.

Cinematic lighting must strike a balance between illuminating the scene and telling the story. Dozens of subtle choices go into even the simplest lighting setup, so it’s important to understand the different lighting techniques for film and video. Once you have the basics of three-point lighting down, experiment with different variations and light sources to strike the perfect mood for your scene.

Understanding lighting techniques and lighting design is essential in film lighting. Now that you know the tricks of the trade, you are ready to light your next project.

"If you really look carefully at natural light, you realize how complex it is, and how it's constantly shifting. When you put up an...