To understand contrast ratio or lighting ratio, you need to pay attention to the way your favorite TV shows and films are lit. In most cases, the elements of lighting disappear into the background. Unless you’re truly paying attention or have a trained eye, you might not notice the nuances of lighting, but the lighting is an integral part of the story and helps affect the emotions you feel as a viewer.

What is a contrast ratio?

Contrast ratio refers to the comparison of the intensity main source of light from which shadows fall, to the light that fills in the shadow areas. Another way to approach this is that contrast ratio is the difference in the bright areas of a scene compared to the darker shadow areas. As you watch your favorite sitcom or cinematic entertainment, pay attention to how the characters are lit.

Contrast ratio is important as it helps tell the story by developing a mood, be it dramatic or light-hearted. For example, a low contrast ratio like 1:1 or 2:1 is best set for TV comedies and interviewing purposes where the subjects should be evenly lit to give a feeling of openness and enlightenment. On the other hand, a high contrast ratio like 4:1 or more creates more shadowy areas that give the scene more drama and a sense of foreboding. High contrast ratios are best used in film noir or thriller type films where dark shadows add to the sense of mystery and suspense.

The main advantage in using and documenting a contrast ratio across shots is that it allows you to maintain the same intensity in the brightest and darkest areas of the face to keep the shots consistent throughout the project.

To measure the contrast ratio you will need a light meter. The process starts with you measuring the main source of light, or the key light. Get a reading from the brightest area on the face of your subject. Then, measure the area lit by the secondary light, or fill light. To make sense of what you have just measured you have to understand that the information you have just gathered is in F-stops, a measure of light. With each additional F-stop, for example going one stop from f/1.4 to  f/2.0, you create a doubling of light. The reverse is also true; moving one stop from f/8.0 to f/5.6 results in a halving of the light.

Let’s say you grabbed a measurement from your key light of f/8.0. Then, when you measured your fill light area, you get a reading of f/4.0. This will lead you to a contrast ratio of 4:1 because there are two stops between f/4.0 and f/8.0 and each stop doubles the amount of light. In other words, two stops x twice the light per stop = four times as much light at f/8.0 than at f/4.0.

Gathering this type of this type of information is important because it keeps continuity in the lighting from shot to shot throughout a project. Furthermore, if a contrast ratio is established on a project, the cinematographer and gaffer crew can better work ahead of the director and the talent during down times to set up scenes ahead of schedule, knowing what the lighting setup will be.

To recap, contrast ratio is the difference in the bright and dark areas of a scene cast from the key light compared to the fill light. To measure this ratio one will use a light meter and the ratio will be calculated in F-stops. Each stop moving up or down the range will create a doubling or halving of light. In the end the ratio will be expressed in a set of numbers or ratio like 8:1, 4:1 or 2:1. This process of measuring the light can help create consistency in shot to shot throughout a project as well as help make the crews set-up more fluid during down time. Ultimately, using the right contrast ratio helps to add the drama or lighten mood as needed in the script.

Marc Johnson is a University of Chico graduate, a lover of the creative arts, and an avid photographer, with an undying entrepreneurial spirit. 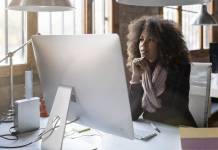 In this article I will share with you the KISS method — or Keep It Simple Stupid — as it pertains to...