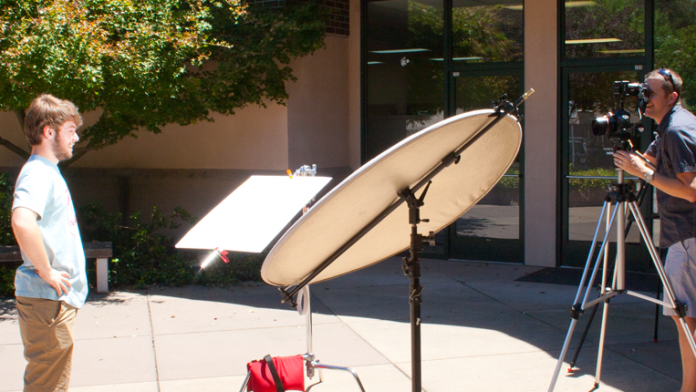 The very nature of lighting with a reflector is to “keep it simple.” With that in mind, we’re going to learn how to apply some basics of lighting to create some very nice effects with only the use of one, two or three simple reflectors.

Starting with a one light setup and no fill light can give some very dramatic results. Take for instance a performer on an opera stage who is lit with one harsh spot light while performing a dramatic scene prior to battle. It wouldn’t be very dramatic if it was softly lit with light dappling on his face. Here, no fill is required because the viewer expects harsh lighting.

A single light source doesn’t have to be dramatic and contrasty, however. Bring in a large reflector to bounce back some of that light for flattering soft fill light. The beauty of using reflectors instead of light is the you really can’t over power your main light because you are really just reflecting part of that main source in a different direction. Move your reflectors in closer for more fill or move them back for less. It’s that simple.

If you like to try different looks, then five-in-one reflectors are fantastic accessories for you location kit. Complete with black for negative or subtractive light for when there is too much light or just to block out light, these reflectors offer five different solutions including transparent, gold, silver and opaque white.

Transparent reflectors are great for filtering the sunlight for strongly lit portraits while opaque is good for reflecting the sun. Silver and gold are priceless for creating strong highlights and clear specular highlights. Gold creates warm highlights much like a sunset would provide, while silver is color neutral, which can be handy if you want to create slightly cooler highlights while reflecting the blue sky.

Use a more reflective surface such as a gold or silver disk for stronger fill, or use a soft white opaque reflector for softer, less powerful fill. Mix and match gold and soft opaque for different effects. A subject, for instance, can be primarily lit with a warm colored reflector acting as the main light from in front and just slightly to one side for a flattering warm look. Using the harsh sun in the background provides a bright sunny-day feel. A bit of lens flair might sneak in for a “spur of the moment” look. Try this without fill light provided by a reflector and you would get some pretty bad exposure. Using your light kit would require thousand watts of lighting along with some large soft boxes!

With some experimentation, these all in one reflectors can be indispensable on location and they are available in several sizes.

Outdoors is where you will find reflectors most useful. The lighting can be provided by a large reflector directly in front of the subject. As mentioned above, you can’t over power the main light source with reflectors; they generally reflect about 50 percent of the main light source, so when outdoors they can be indispensable when matching the massive light power of the sun.

Reflectors are great because when helpers are holding them, they feel part of the process and that always lightens up the mood of the production and helps the talent relax!

Another cool thing is they don’t need to be plugged in and the batteries are, well, non existent. All you need is a stand or two to hold them — or better yet bring along some friends and have some fun on the production. Reflectors are great because when helpers are holding them, they feel part of the process and that always lightens up the mood of the production and helps the talent relax!

Large windows can be great sources of natural light, but can also cause trouble in the form of mismatched color temperatures and unwanted silhouetting. With a window behind the subject, use a reflector to reflect light back on to the subject for a nice even fill — very simple lighting, very simple production and great results.

Another great quality of reflectors is they generally reflect back the same color temperature as the light source they are reflecting. This is great when working in a room with a large window and only tungsten kit lights. Reflectors can also be useful when used with fluorescent lighting such as that typically found in office settings since fluorescent lighting can be pretty hard to match with your light kit.

So far we have discussed using reflectors as mostly as fill lights, but using one as a key is a bit more complicated. Once you understand the process, you will once again appreciate that one quality that sets reflectors apart from lights that you plug in, and that is they generally can’t overpower your light source even when used as a key light.

Let’s say the main light source is overhead fluorescent lights, which provide even, flattering, if not boring lighting. A large reflector can be used as the key light brought in close the subject’s right side and another large reflector is used a bit farther away and slightly to the left for the fill. The reflector positioned closer to the subject will reflect more light, acting as an effective key light. The reflector that is farther away will reflect less light to fill in some but not all of the shadows created by the first reflector.

The great thing about reflectors is they require no batteries or power source, so you can carry them everywhere you may feel compelled to make great videos so practice a little lighting around you home and then take them on your next adventure!