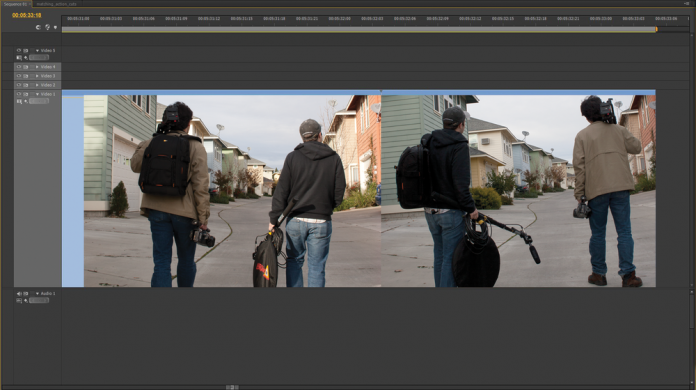 We all make mistakes sometimes. Occasionally we make “unconscious” errors because we’re simply unaware that they’re there. At one time or another we have all experienced “button shift,” that fashion faux pas where you put on your jacket with the buttons and holes misaligned, leaving one shirttail longer than the other and the collar cockeyed and catawampus.

Other mistakes are “conscious” ones. These don’t occur because we are unaware – we just don’t care enough to fix them. This might include wearing mismatched socks, or leaving an open seam in the back of a wrapped gift because the paper is a little too small to cover the whole box.

While you are probably unknowingly walking around with your zipper down, you may be guilty of committing equally embarrassing violations in your videos. After more than 20 years in the industry, I have encountered every editing error known. Some are subtle, others are obvious, but all of them are video violations to avoid.
1 – Poor Audio Mix
One of the most obvious editing errors is the need to fix your audio mix. Almost every edit has two primary audio components: voice and music. Both play important roles in your productions. The voices communicate content. They impart information and tell the story. Music sets the mood and drives the pace of the edit. But when your music mix is too hot, the instrumentals will overpower the vocals, and viewers might miss the message. When in doubt, ride your music levels slightly lower than you think you should, and bump them up only in gaps between dialogue.
2 – Improper Pacing
Music also drives the pace of a production. Even if only used as music bed, the soundtrack needs to match the timing of your edits. A slow-paced song lends itself to longer shots, slower camera moves and soft transitions, like dissolves. Upbeat, fast-paced music fits best with quick shots, whip pans and cuts; not fades. When hyper-fast edits are mismatched with slow, plodding music or vice versa, the pace doesn’t play properly. Select a soundtrack that sets the right pace for the piece, and edit your visuals to match the pace of the music. 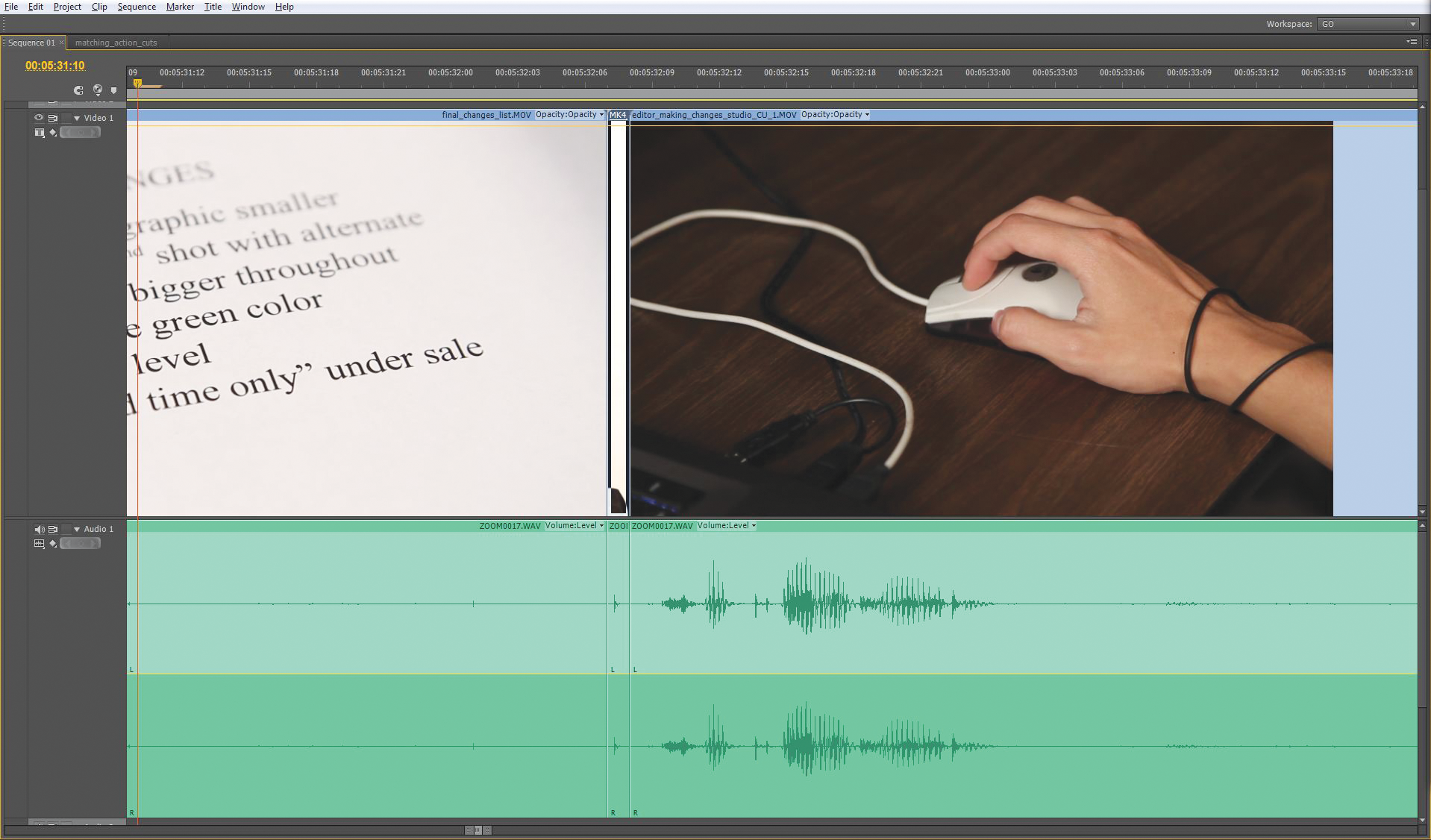 3 – Flash Frames
I have come to pride myself in my ability to spot weird single-frame anomalies. These wayward flash frames often aren’t obvious (if you blink at the wrong time you’ll miss one), but they do create a subtle sense of uneasiness and give your viewers a feeling that something isn’t right. Flash frames are often introduced when you are working fast or re-sequencing clips during revisions. The solution is to always keep an eye out for the sneaky little buggers. If you don’t have an eye that can catch them on the fly, it’s a good idea to zoom in on your timeline and quickly review each cut to make sure they’re clean.
4 – Incomplete Transitions
Incomplete transitions (aka Transitious interruptus) are another personal pet peeve. These occur when a transition effect (usually a dissolve) extends longer than the duration of the outbound video clip. The sensation it creates is a partial dissolve that ends abruptly with a jarring “pop” to the next shot. The simple solution is to either extend the outbound shot, or to shorten the transition.
5 – Jump Cuts and Match Frames
A jump cut occurs when a shot is edited so that a portion is omitted and the video is squashed together, causing the person or objects on screen to “jump” into a different position, popping across the screen in an unnatural manner. A match cut or match frame occurs when two shots that are similar in composition are cut back to back.
Jump cuts and match frames are easily remedied by inserting a cutaway (or B-roll) shot to separate them. If you do need to cut between two shots of the same person, compose the shots differently from one another either in subject size, camera height or camera angle. Always make sure the shots are framed differently.
6 – Ghost Frames
When the outbound shot used in a dissolve goes to another shot before the transition is complete, what remains are ghost frames. The cut within the dissolve is only seen at partial opacity, so the viewer is never able to fully process what the shot is or if it was intended to be there. A related problem occurs when you cut to a shot then begin a dissolve before the viewer has time to see and “receive” the shot.
The unwritten rules of editing dictate that you must only dissolve between two established shots (the outbound and the inbound), and that you not introduce embedded edits within your transitions.
7 – Out-of-Sync Audio
Out-of-sync audio is a major distraction to viewers, so there’s no room for grace on this one. Even with today’s software that often flags audio clips that get bumped out of sync, shifts in audio do happen as clips are being bumped and nudged around the timeline. These shifts occasionally occur when working with clips at different video frame rates or audio sample rates. The remedy is usually pretty simple. Split the clip and bump it a few frames to get the words and the lips back into sync.
8 – Tacky Transitions
While we are talking about transitions, let me take the opportunity to once again encourage you to resist the urge to splurge when it comes to using weird and wacky transitions. Cuts and dissolves should be your mainstay, and special effects need to stay special. When they do appear, it should only be on the rare occasion when you could defend your choice to use them in a court of law. If you want your work to look professional, you need to flush the wipes and 3D cube spins. 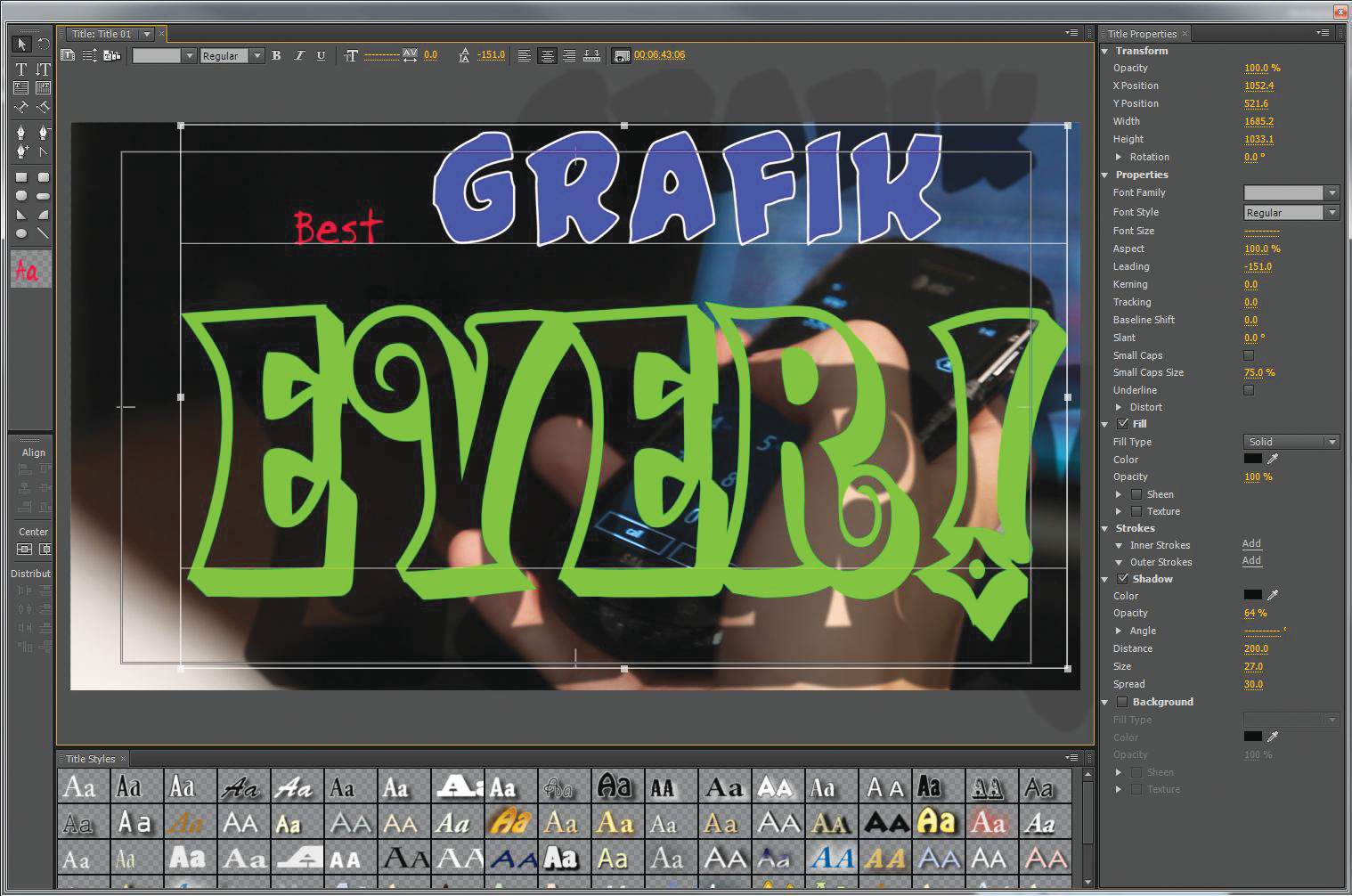 9 – Graphic Violations
There are enough graphic-related editing errors out there to merit an entire article. For now we will merely mention the most commonly made mistakes. These include using multiple fonts in a single graphic, hard-to-read colors, low contrast of text and background, obnoxiously large drop shadows, shadows that fall in multiple directions, text that is too small, too large or too swirly to read, titles that linger on the screen too long, or that are on and off so quickly that they can’t be read, and the ever-popular typo or grammar error.
10 – Staggered Outs
I have saved this mistake until the end of this article because it is typically seen at the end of a production. I call it the “stagger stop” or the “awkward out.” This mistake occurs when the various elements on a graphic slide fade out at different times, rather than together. Because most graphics are made up of elements on several layers of the timeline, it is easy to inadvertently stagger the out points in a way that causes one or more portions of the graphics to end before the others, causing part of the graphic to go away too soon. Make sure all elements have the same out point on the timeline, or fade out by dropping a black clip on a superior track on the timeline.
Edit well!
The first step to professionalizing your productions is making it a priority to purge them of these 10 predictable problems. The next step is raising awareness. Now that you know these common errors are out there, add them to your personal “most wanted” list, and do everything you can to eradicate them from your edits. So, check your buttons and “XYZ.” We don’t want anyone snickering behind your back.
Chuck Peters is a 3-time Emmy award winning writer and producer. He is currently VP of Production at KIDMO/Rivet Productions.
Advertisement