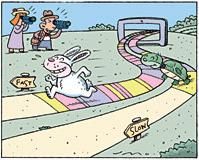 Okay – I admit it, I have a problem. I walk fast. I don’t know why, I just do. If I get out of the car at the same time as my wife and son, I’m almost always inside the store before they are. And my 10-year-old is usually trailing far behind my wife, particularly if there’s any interesting junk in the parking lot along his path.

I bring up this example to illustrate that while the goal is the same – walking from the car to the store – for all of us, the pace at which each of us prefers to accomplish this task is vastly different. And so it is with our videos. Each video we make and each scene within the overall work, has it’s own pace, whether we recognize that fact or not.

The pace of MTV-style music videos is so fast that they can be hard to follow. At the other end of the scale is a new parent watching a tape of their newborn child in the cradle. In the first instance, the audience craves change and action. In the second, the content on the screen is so personally fulfilling that the viewer can gaze for minutes at a time at a nearly unchanging scene – and be perfectly content to watch and dream.

So each video has a pace that fits the content. And both paces are right for the needs of the video. But when the pace of a video feels wrong, what can you do to change it?

The simplest answer is if the pace is too slow, you can add more cuts and more media to watch, hear or judge in a given period of time. If things are moving too fast for your audience to grasp, eliminate some clips and stay with a shot longer. (Of course you’ll need source material that allows you to do this.)

The timeline in Figure 1a shows a 30-second segment of a video taken at a local car show. Each of the shots is a 10-second slow pan, wide shot of a car. The cars themselves are interesting, but the pacing of the video as it’s currently cut will be somewhat boring. Each shot has similar framing, similar length and similar move. While they do a decent job of showing the car, this approach will likely appeal only to a real car buff with an appreciation for the subject.

In Figure 1b, we’ve radically changed the pacing of the same 30-second segment by varying the views of each car within the same period. Now, instead of static shots or long, slow pans, we have an establishing shot of each car, followed by medium and close up shots of some of the details that make the cars so special. We cut to these frequently and quickly. The first edit provides three basic shots and leaves the viewer plenty of time to think about the subject. The second directs the viewer’s attention to details that are special about the vehicle. The average viewer will likely watch the second edit with much more interest, simply because their eyes are being directed to details that keep the experience fresh and shifting. The length and overall timing of the video remains the same, but the pacing of the video is faster.

Pacing Starts at the Shoot

If you come back from your car show shoot with nothing but three static shots of the cars, your options are going to be severely limited. Faster pacing usually requires good coverage, which means shooting a variety of shots and angles of your subject. Ultra wide and ultra close-up, high angle and low, reflections, details, shots with and without people or other objects that can show the relative size and shape of your subject; some or all of these can help you provide good coverage in addition to your basic scenes.

Another example of the element of pacing is action within a scene. Instead of simply a shot of a door handle, the videographer can stage the shot with a hand reaching out to open the car door. Even if the door handle shot is actually longer than a static shot of the handle, the action helps keep the pacing up because the audience remains engaged by watching the action of the hand.

Adding the action helps the editor transition from an outside view to details on the inside. It also brings a human element into the video and allows the viewer to better imagine going for a ride. Scenes with action are, by their nature, faster paced than scenes of static imagery.

So how do you determine what type of pacing is best for your project? Generally speaking, the younger the audience, the faster the pace they can comfortably tolerate. But that’s a generalization and like all generalizations, it’s as false as it is true.

The movie Titanic was a huge hit with adolescent girls. While it was an action move on it’s surface, the scenes that attracted that particular audience were the love scenes between Leonardo DiCaprio and Kate Winslet, and not the fast pace action sequences. The lesson is that if you give an audience content it wants to see, they’ll stay happy when you linger a bit on scenes. If the core material is less intrinsically interesting, it’s often wise to keep the video pace moving, so you don’t risk putting your audience to sleep.

The overall pace of information that people in our society are used to consuming continues to accelerate. We’re a nation of remote control channel changers, radio station button bashers and Web-clicking multi-taskers.

So when we sit down to watch a video, our brains are ready to receive data at a heavy pace. That doesn’t mean that the only right pace for presenting visual information is with an MTV pace.

Like that shot of the baby in the cradle mentioned earlier in this article, sometimes the material on the screen will make all the connection with the audience that you need. When that happens, it’s no error to linger over your shots and give your audience the time they need to not just look at, but to think about the material being presented.

Each scene you shoot has its own internal clock. A shot of speeding freeway traffic clearly has a quicker clock than a shot of a horse and buggy meandering down a country lane. You have the power to quicken or slow your shots simply by virtue of your camera work. If you’re shooting a landscape scene with a bridge on the right and a lighthouse on the left, you have an abundance of choices about how to shoot those elements, each with it’s own pacing.

You can go wide and do a static shot showing both. You can do static shots of each individual scene and cut between them. You can also elect to start on one and pan to the other. That pan can be anything from slow and stately, to a whip-pan where the scenery between the two is blurred. The choice you make will go a long way to determining the overall pace of your presentation of the images to your audience. Or why not shoot it each way and decide later? That’s good coverage. And good coverage makes for good programs.

Sidebar: What Did You Really Think?

Most people are reluctant to criticize the work of others. We’re polite to a fault. Sometimes you have to dig comments out of people, particularly about subtle things like your work’s pacing. If your goal is to really discover if your work is really "on target" you have to learn to risk criticism and find out what others really think.

So the next time you’re sitting at your edit system and you suspect that a piece of your timeline isn’t paced just right, find someone who hasn’t been staring at the material for a week, show them the piece in question, and ask them what they really think.