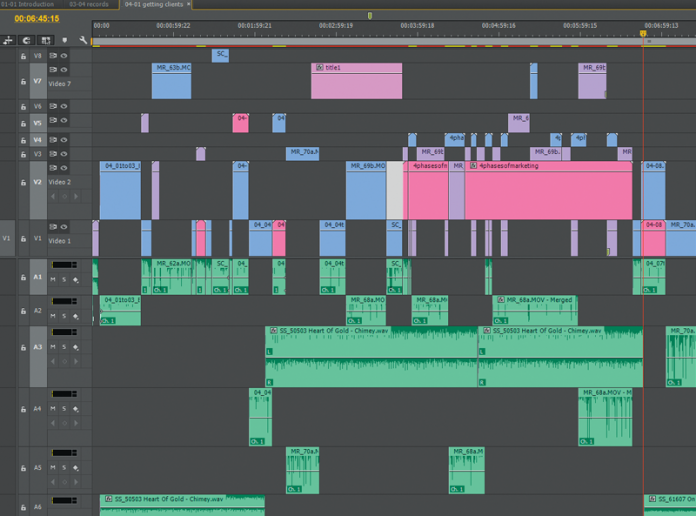 The timeline of any video editing program is the foundation of an edit. It’s the place where the video editor digs their hands in and gets dirty. More often than not, it’s going to be a thicket of weeds. An organized timeline helps the video editor to work efficiently through a project. It gives them more time to make creative decisions, try out multiple cuts and fix production issues that can only be fixed by a skilled editor with time on their hands. Those problem areas of an edit that need fixing are much easier to see and work through with an organized timeline.

When the video editor is buried at eye-level with their media in the timeline, they’re less likely to be able to pull their head out of the undergrowth and see the big picture of a production’s organization. That’s why organization starts outside of the timeline, so when the video editor gets editing, the content is ready to line up and play nice.

What’s In a Name?

One of the biggest favors a video editor can do for themselves is to come up with a standard naming convention that they consistently apply to all files in all of their projects. A naming convention is simply a standard taxonomy for the structure of a name given to files. It should be easy to understand and allow the video editor to immediately identify the file upon seeing only the name. This will save hours in the long run, no more scrubbing through clips to figure out what they are. When it comes to editing in the timeline, a video editor can identify a stray clip without having to move the playhead, they can look at the clip’s name and know what it is.

A good place to start in establishing a timeline structure is in assigning and layering tracks according to the content they will hold. This can be tricky with video layers and at times the video editor will need to break away from the standard in order to get things to work, but it does help when setting up an edit. One way to start this is by determining what kind of production the video edit is for and understanding the different types of footage and content that will be used in the timeline. The video editor can make the decision that only certain types of media go into particular video tracks. For example, if the video editor is putting together an interview-centric piece they may decide that video track 1 and video track 2 will be for any two-shots of the interviewee and the interviewer. Then they would assign video track 3 to close-up shots of the interviewee. Video tracks 4, 5, and 6 would be used for B-roll clips, while video tracks 7, 8, and 9 would be for graphics and overlay effects. This technique can scale to the size and scope of the project. It doesn’t always hold up, but it’s a good place to start when laying out a rough cut.

An organized timeline helps the video editor to work efficiently through a project.

This same technique can be applied to audio and many times it’s a much more efficient technique for audio work. Different audio tracks can be assigned to different voices within a piece, regardless of the video’s intent. Likewise, different tracks can be assigned for sound effects and music tracks. This makes it especially efficient for a video editor who is auditioning various music beds, they can mute and solo individual tracks knowing they will only hear what is intended.

Subcomps (or sub-compositions) are compositions that are placed as a single clip within the timeline of another composition. They are also referred to as nested compositions, it helps to think of them as nested dolls, one composition opens up to reveal another. At first glance they appear to be complex and confusing, but when used properly, and with good intention, subcomps become an excellent organizational tool. A video editing timeline is most often filled with a large number of clips. More often than not, groups of these clips go together well and once sequenced, will stay together throughout the edit. It’s the positioning and interaction of these different groups that ends up getting shuffled around. When large groups of individual clips are selected and moved around there’s a great chance that pieces will be lost or placed out of sync within the timeline. A video editor can turn these large groups into individual subcomps, in which they appear and function as a single clip in the timeline, keeping things much more organized. The subcomp remains highly functional as the video editor can still open it up and edit the individual clips in the subcomp to suit their needs.

Markers are a very simple tool that can be applied to the timeline and to individual clips. Timeline markers are a great way to denote various portions of an edit. One of the most frustrating mishaps for an editor is when several synced clips stacked up on another get accidently moved. Placing a layer marker on each clip, to note where they line up with overlapping clips and with the timeline, helps the editor to visually line clips up when they are accidently rearranged. Markers also provide an easy way to attach reminders and notes to frames inside the timeline.

Video editing can get dirty. There’s a lot to toil through with every production and the deeper a video editor gets into their timeline, the deeper they get into the mess.

Organization is not the result of a quick fix guidebook, it’s a habit that’s formed from intentional and consistent methods. Most of all, organization is a tool, one that helps the video editor to efficiently manage the chaos of the creative process. There is a beautiful order that underlies even the messiest situations, and truth be told, it takes a lot of hard work and patience in the dirt to grow something beautiful.

Some of the greatest organizational tools in video editing programs lie outside of the timeline. The UI (user interface) is an exceptionally well designed organizational tool. Developers go to great extents to make sure their UI designs are practical and efficient for their users.

Don’t Settle For Just One Set-Up

Create and save multiple UI set-ups for different tasks. That way, the tools needed for a particular post-production task are immediately on hand when needed, and safely tucked away when not in use.

Most editing work gets done in the timeline. The default setting for most video editing programs tries to distribute a balanced share of screen space across multiple editing panels. Reclaim precious ground by reducing the size of windows and panes that aren’t widely used and occupy the reclaimed space with an expanded timeline.

There are shortcuts in life, they’re on the keyboard. Use keyboard shortcuts to expand, collapse, hide and reveal tracks in the timeline. There’s seldom a reason to see every waveform or keyframe all at once.

Keep the Search Light On

Most video editing programs allow the user to turn the search bar on and off. Keep it on. A search becomes highly efficient when paired with a standard naming convention.

Turn Off the Noise

Some video editing applications let the user show or hide the timeline’s transport controls. Create more screen real estate by turning off the on-screen transport buttons and use keyboard shortcuts.