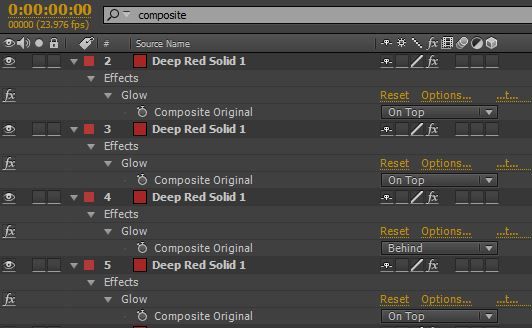 As a long time After Effects user, I still find myself discovering new features nearly every day. Many times I'll be watching some type of training video, and while the main concept of the video is the primary reason for watching, I'm always looking out for ways to speed up my editing process. I was recently watching a great tutorial on Borix FX, and while I have seen the search field at the top of my timeline window just sitting there, awaiting my swift keyboard strokes, I more or less ignored it. I just assumed it was there to find a long lost layer buried farther down the timeline than I was willing to scroll.

It's true that typing in the name of a layer will show you that layer, as well as hiding any layer that doesn't match. However, I did not realize the true power of this little search box. Let's say you have 15 layers that have glow on them. What if you wanted to change the “composite original” setting from “behind” to “on top”. Well, option one (also known as the slower way that I was doing it) is clicking each layer, going to the effects controls window, changing the setting, then clicking on the next layer and repeating the process. This will get the job done. However, option two (also known as the much faster way) is to simply deselect all your layers (ctrl+shift+a), and type “composite” into the timeline search box. This will pull up that specific setting underneath each layer right in the timeline, and now you can simply change each layer in succession without ever going into the effects control window. It also works on layer specific options that don't even appear in the effect control window, such as “path options” on a text layer. This little feature is particularly effective when a specific setting is buried in an avalanche of chevron dropdowns.

It's not a feature that is likely to blow the mind of your friends and family, but your fellow video producers will certainly thank you for it!