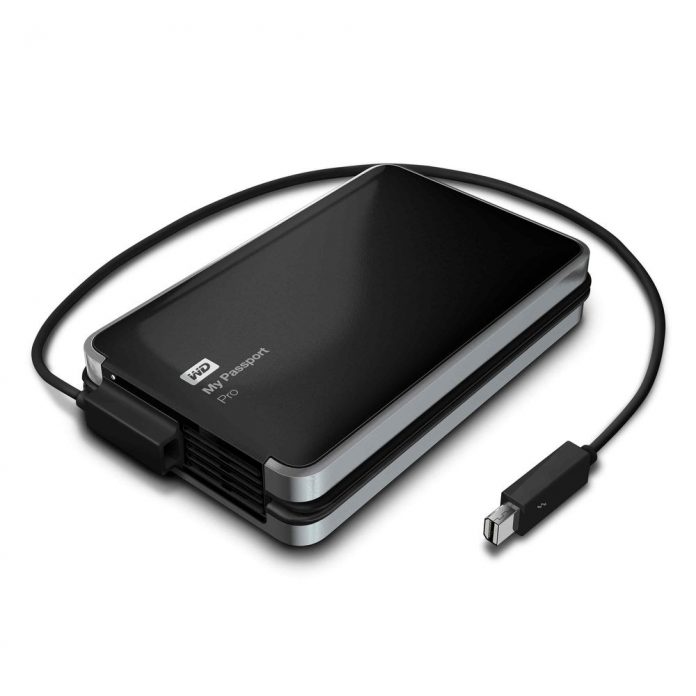 When the Thunderbolt input/output technology standard was first announced, video editors everywhere rejoiced. Video editors crave speed and efficiency, at least when it comes to connecting peripheral devices to their editing bays. Thunderbolt promised speed with 10Gb/s thoughput and Thunderbolt 2 exceeding that amount.

The arrival of Thunderbolt meant that simple plug and play editing off of external drives was possible at even the highest resolutions, again video editors rejoiced. Thunderbolt devices have slowly but steadily rolled into the market, most at high prices. As a result, video editors have been dependent on desktop Thunderbolt RAIDs, which are fast but not always convenient for video editors on the go. That changed this week with the introduction of the affordably priced Western Digital My Passport Pro.

The Western Digital My Passport Pro is the first portable, Thunderbolt powered, dual-drive storage solution. The My Passport Pro has an aluminum housing with two internal 2.5 inch hard drives which are powered through its Thunderbolt connection. There is no need for an external power supply. Users can select the drive's RAID functionality between RAID 0 striping or RAID 1 mirroring. It serves the needs of the creative professional on the go.

Video editors are sure to find satisfaction in the drive's available sizes, with options at 2TB and 4TB, plenty of room for a traveling production. The Western Digital My Passport Pro is available now with the 2TB model priced at $299.99 and the 4TB version at $429.99.