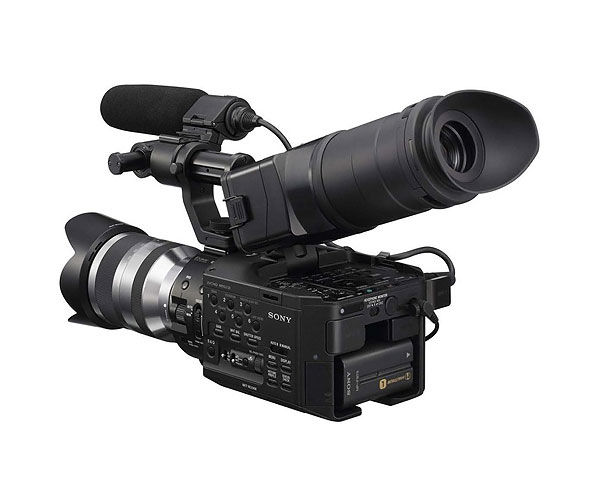 The Sony FS700UK Camcorder is Sonys latest Super Slow Motion camera, and is actually designed for high speed filming – it is capable of recording footage at speeds up to 960 frames per second. This is a compact camera that uses a similar sensor to the previous FS100 model, but the native 4K resolution sensor found on the FS700UK is a definite improvement.

The imaging area of the Sony FS700UK camcorder matches those of the cameras used as standard in Hollywood productions, meaning that this camera is completely compatible with the cine-style lenses in addition to the lens included with the camera. This camcorder is able to shoot in full 1080p high definition, and can either record onto an SD card, the flash memory port or output directly through HDMI connections to an external recording unit. You also have the option to record to both internal and external memory devices simultaneously, providing you with immediate back-up copies of your footage.

There is also no need to purchase an additional microphone in order to record high quality audio to match your video footage, as a shotgun microphone is included with the camera. You can choose to mount this onto the camera, should you require.

One of the more unusual features offered by this camera is the ability to record short bursts (between eight and sixteen seconds) of super slow motion footage. Full resolution is available for some frame per second rates, while other rates cause the resolution to be reduced. The camera also offers face recognition and the ability to focus lenses either manually or automatically. Still images can also be captured using the Sony FS700UK Camcorder.

The camera offers an operating time of 510 minutes when the battery is fully charged, which should be sufficient for most short films. This is an easy-to-operate piece of equipment, making it a good choice for those with limited experience.