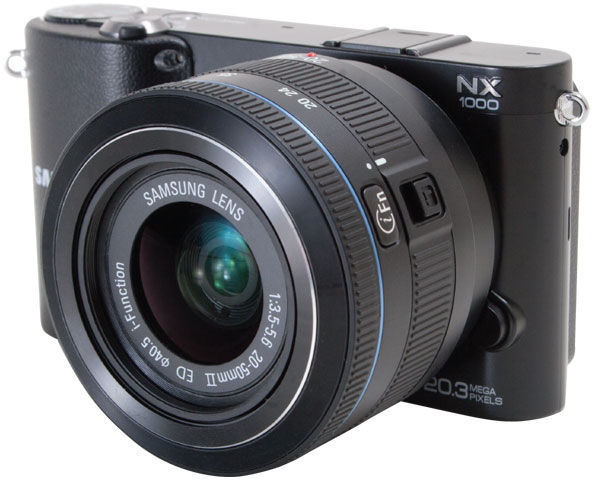 A noteworthy addition to the highly competitive, entry-level, mirrorless camera market, the Samsung NX1000 brings some very desirable features to the table, including interchangeable lenses and Wi-Fi connectivity.

Primarily of solid plastic construction, the NX1000 is pleasing to the eye, with its rounded edges and body choices of either pink, black or white. Buttons and dials have no excessive play, feel solid and are satisfactorily responsive. The compact camera measures slightly smaller than a 3×5-inch card in length and width and fits nicely in the hand, with the fingers wrapping around the bulge on the camera’s front right side, providing a firm grip. Sharing the front is the lens release button and Samsung NX mount, to which we fit the included 20-50mm, f/3.5-5.6 kit lens with i-Function. Press the iFn button on the side of the lens, while you’re in lens priority mode and the user can quickly adjust a number of settings using the focus ring.

At the bottom of the NX1000 is a standard tripod mount and compartment containing the rechargeable battery and SD/SDHC/SDXC media card slot. The top of the unit features a built-in microphone and a hot shoe for mounting various accessories such as the included external flash or optional external mic. An integrated power switch and shutter button, as well as the Smart Link button (for starting desired Wi-Fi functions) share the top portion of the NX1000. At the far right is a mode dial for selecting among the available modes, which are: SMART, Program, Aperture Priority, Shutter Priority, Manual, Lens Priority, Magic, Scene, Movie and Wi-Fi.

A 3-inch non-articulating TFT LCD screen dominates the rear of the camera. With a screen resolution of 921k dots, images are bright and crisp. The onboard speaker lies at the left side of the camera, opposite two covered ports for Micro-USB and Micro HDMI. Unfortunately, there is no port for headphone monitoring of recorded audio. At the right rear of the camera is the video recording button and Smart dial, flanked by four additional buttons: menu, function, playback and delete. The Smart dial consists of a four-way navigation button to choose display options, adjust exposure values, change drive options and select the appropriate focus mode. A wheel around the four-way button moves you through screens and options and the OK button at the center is used to make the desired selection.

Featuring a 20.3MP APS-C CMOS sensor, the NX1000 produces impressive results for an entry-level camera. Video is recorded at resolutions up to 1080p full HD, with excellent results. Tests netted good color reproduction, crisp details and little noise. Audio with the given mic is adequate, not spectacular. Improved audio may be had for an additional $130 retail with the optional NX mic. Cable-free, it attaches directly to the camera’s hot shoe and has a headphone port on the side for live monitoring. It also features a Zoom/Wide switch on top for effectively altering the scope of the mic’s pickup pattern. While the LCD is bright and clear, it washes out in bright sunlight. Having an articulating screen or electronic viewfinder (EVF) option would be a big help in this regard.

If sharing your images via Wi-Fi appeals to you, then the NX1000 gives you a variety of means for doing so. Switch the mode dial to Wi-Fi to bring up options for copying photos and videos from your camera to your smartphone, to use your smartphone as a remote monitor and control device, email your images, upload them to sites such as Facebook and YouTube and even store them on Microsoft’s SkyDrive cloud service. You also have options for wirelessly transferring your photos and videos to a PC and viewing them on other Wi-Fi connected devices.

Weight: 0.5lb without battery and card

If you’re looking to enter the video-capable still camera arena, want the option of interchangeable lenses and the instant share capability of Wi-Fi, then you’ll want to give the Samsung NX1000 your own test run.