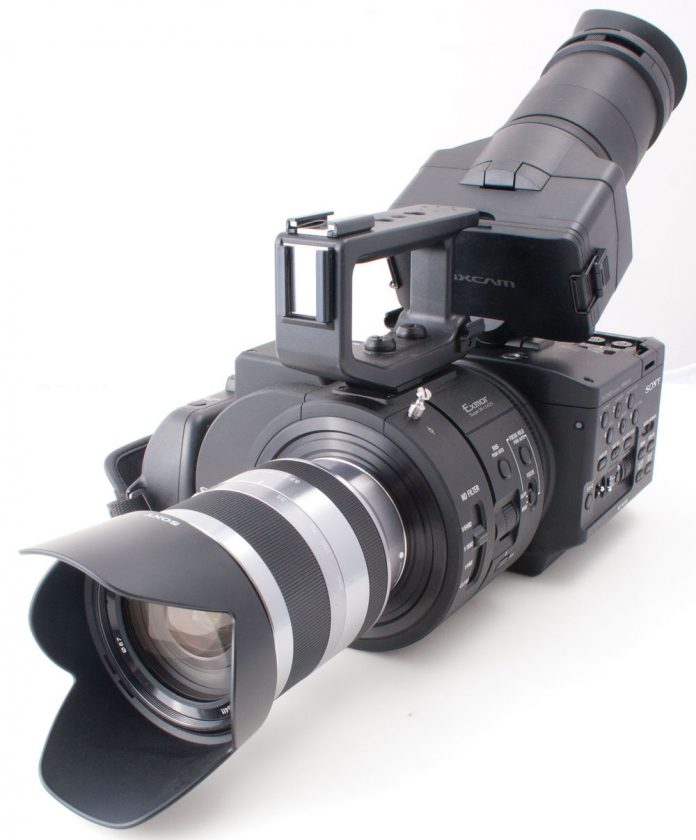 In 2011, Sony released the NEX-FS100 as its first small-bodied, large-sensor video camera for the professional market. Featuring interchangeable lenses and Sony’s new Exmor Super35 sensor, this camera brought high-end features and performance together at an affordable price. This year Sony is upping the ante even more with the NEX-FS700, featuring an improved 4K-ready sensor, super slow-motion, and several design improvements from last year’s FS100.

Even though the FS700 and FS100 look very similar, there are several key differences that give the FS700 an edge over last year’s model as well as the competition. The FS700 packs a lot of new features into a body that is slightly larger than the FS100, yet looks and feels nearly identical in practice. One of the best new features are three built-in Neutral Density (ND) filters, alleviating the need to spend money and time buying and mounting external filters. The mechanism that controls the ND filter setting is a bit fussy to get set just right, but it is still a marked improvement over external ND filters. Another nice touch is the addition of a removable handle with two accessory shoes and several 1/4-inch and 3/8-inch mounting points for other accessories. The adjustable handgrip mounting point is more secure and an XLR port is closer to the front of the camera to make it easier to connect a mounted microphone. The button controls also now protrude slightly higher above the body surface for improved tactile feedback.

The FS700 uses the same Sony E-mount for lenses as the FS100, but you can purchase adapters that allow you to attach other lenses from Sony, Canon, Nikon, and even large cinema Positive Lock (PL) mount lenses. The included 18-200mm F3.5-6.3 lens in our review kit has a solid build and produces sharp video and an amazingly shallow depth of field at the widest aperture. The bokeh this lens produces has a very soft and appealing nature, creating nearly perfect circles of color in the unfocused areas of the shot.

The 3.5-inch LCD touchscreen monitor on top of the FS700 flips upward and can be rotated 90 degrees to the right or left to allow viewing from the rear or either side of the camera. While we found the rotation feature helpful, the placement of the LCD monitor on the top of the camera body can make it difficult to see when the camera is mounted high above you. A viewfinder accessory is also included that attaches directly to the LCD monitor and magnifies the screen and cuts out unwanted light for better visibility in bright light. Although the screen was easier to see outside with the viewfinder attached, we found this accessory made focusing more difficult due to the magnification of the LCD monitor, reducing its sharpness. Using the included peaking and zebra stripes settings are a must when working with a camera this sensitive to focus and light, and will help to get proper focus and exposure.

The FS700 has no built-in mic, instead Sony’s ECM-XM1 microphone and a dual-shock absorbing microphone mount are included, which are easily attached to one of the accessory shoes on the handle. There is an XLR port on the right side of the body near the mount point to make connecting your external mic more convenient, as well as a secondary XLR port near the back for a second audio source.

Sony’s new 4K-ready Super35 sensor on the FS700 is capable of resolution greater than three times the FS100. This allows the use of heavy over-sampling to create images with impeccable detail and little to no aliasing along edges. While the FS700 currently captures 1080p footage in-camera on Memory Stick, SD, or Sony’s flash memory unit, a future firmware update and a recording device to be released by Sony will allow capture of 4K resolution video using the 3G HD-SDI connector. Until this update becomes available, the HD-SDI port can also be used to capture 1080p video with 8-bit 4:2:2 color. In addition to the HD-SDI port, HDMI, component, and composite ports are provided for external playback and capture as well.

One of the most exciting new features in the FS700 is the super slow-motion mode that allows you to capture as many as 240fps in full HD 1080p. Using 24p as the final frame rate , this means your playback is only moving at 1/10th of normal speed. If you’re willing to step down to half or one quarter the resolution of 1080p, you can push the frame rate to 480fps or even an astonishing 960fps! The results are absolutely amazing to watch, and it is incredible how simply slowing a subject down this much makes something that is rather ordinary look truly extraordinary. The 480fps settings produced fantastic results without huge losses in detail, while the 960fps setting noticeably reduced the quality and clarity.

Be aware that to capture footage at these shutter speeds you will need much more light than you would normally need to get a proper exposure. If light levels are low, the FS700 can add up to 30dB of gain to brighten the image, but using anything beyond 18dB will introduce quite a bit of noise. The trigger that captures slow-motion can be set to 4.5 or nine seconds preceding pressing record or the nine seconds after pressing record. This is great as it allows you to capture a snippet of time that has already occurred, especially handy if you are waiting to capture a rare event.

When you look at everything you get with the FS700, it is an amazing value compared to some of the competition. Its low light performance, slow-motion capture, and overall picture quality is stunning. It has a few small design quirks, but those can easily be overlooked when you see everything you get in this camera kit for less than $10,000. With the FS700, you can have everything you need now, plus the ability to shoot 4K in the future.