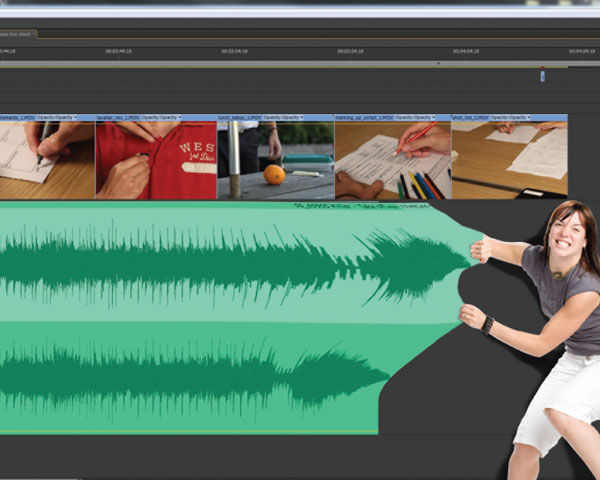 If you’ve ever added music to a video soundtrack you know it rarely fits. The music is either too short or too long. If the video must fit the music, this usually means you have to cut out content you like or add filler you don’t like. Of course, you could just cut the music at the end, or tack another song on to fill the gap, but that’s not very elegant, is it? It’s not hard learning how to make a video with music. With a little extra work, you can make the music fit in just about any situation or, better yet, make the video fit the music.

In most cases, you’re not actually recording audio for video, but using something you already have, either from a music library or Internet download. But what do you do if your video is exactly 4:00 and the music is 3:20? While it’s possible to stretch the tempo of a piece in certain audio editing or music mixing software, that’s not what we’re looking for. For this project, we’re going to use a simple technique to lengthen the piece to fit the video.

Start with your video on the timeline. Make sure you have two additional audio tracks available and place identical copies of the music on each track. The first copy will start at the video start (or wherever the music should begin). Next, slide the end of the second copy to the end of the video. Looking at the timeline, you’ll see a couple of minutes of overlap between the two songs – this is exactly what we need.

Assuming the music has a constant tempo, zoom in on the waveforms for both music tracks. As you listen to the track, watch the waveform and look for easy-to-find beats in the music. Drums are usually best for this since they’re the timekeepers for the music. Your challenge is to match the beats between the two tracks. With some careful listening and just a little slipping and sliding, you should be able to do this. The music still won’t match, but we’ll fix that next.

Once you have your beat-synced audio tracks, listen for an obvious transition in the music. In a pop song, there are usually verses, choruses and a bridge. The song has to transition between these segments and those are often excellent edit points. Of course, instrumental-only music won’t be as obvious, but if you study it, you’ll find that it’s built the same way, just without lyrics. The trick is to find corresponding transitions in each song that, when cross-faded, sound natural. Once you’ve found a potential spot, trim each audio clip so that they overlap by a second or two, and then fade the first clip out and the second clip in. This takes some trial and error, but it’s not hard and the results work well in most instances. Don’t forget, if you have dialog going during the music at the transition, it can easily mask a less-than-perfect cross fade.

Music videos are a genre all their own. While you may not be working on a music video production, the same audio production concepts apply in other situations too. A typical music video falls into one of three basic categories: The Mini-Movie, The Concert Video and The Art Piece. Of course, you will see hybrids too, but all of them share one common thread; the visuals are edited to the music. Music determines the length of the piece and tempo of edits. This may seem backward to your normal edit, but it’s a great way to approach a project.

With music setting the guidelines for your edit, you have built-in pacing for the cuts. You can choose to cut on every beat; every two to four beats or cut with the phrases in the music. Using the music video template, the verses can tell a story with narrative shots while the choruses could contain concert footage – or vice versa. It’s your call. Watch a few music videos and make mental notes for your next project. If you’ve never edited this way, you may be surprised at how easily the visuals follow the music.

Of course, not everyone edits movie trailers, but they’re great examples of matching music to visuals and visuals to music. Pacing is everything in a movie trailer. The editor has two or three minutes to convince us to pay good money to see their movie. Music is one of the tools the editor uses to pry open our wallets. For example, Peter Gabriel’s song The Rhythm of the Heat, released in 1982 is still popular for movie trailers. The pounding drums toward the end are what set it apart as a perfect action flick song.

Editing this way is something of a hybrid between standard background music and a music video. Your musical choices are very important here and should fit both with what the viewer sees and what you want them to feel. Consider a scene where parents learn their son is missing in combat. Here, you’re looking for music that tugs at the heart. Alternatively, scenes of shoot-outs, chases and general action require heart-pounding music coupled with quick edits.

The nice thing is that the music establishes the tempo for your edits. Working with musical beats – just like the music video example above – allows easy edit points. In fact, a great way to follow the beat is to place markers on the timeline, maybe as often as every beat, depending on the pace you’ve established. If the beat is prominent, you can find it pretty quickly using the waveform view in your editing software. Follow the tempo and set some markers. As you edit to fit these markers, mix it up some. Maybe one clip runs for four beats while others are on screen for one or two beats. It’s your choice, but your musical choices establish the framework for the finished product.

It’s your turn to experiment with the editing techniques we’ve outlined. There’s no magical music video software that automatically does this well, so you’ll just have to do the work. Whether you’re editing the trailer for the next big summer blockbuster or just throwing some music under a training video, pay attention to the music. It sets the tone for the project and serves as an important quality cue. Do it right and every project will stand out.

You’ve planned for the visuals in your project for weeks. You’ve rented lenses and lighting to get that big-budget look. Maybe you’ve even hired some crew to make the shoot go easier and faster. Finally, you nailed the edit and it looks fantastic. Are you really going to throw that cheesy free music track in there? You know, the one that sounds like a reject from the Napoleon Dynamite soundtrack? If you’re going to do it right, budget for some good music. Even if you don’t have access to a music library, several online vendors offer excellent music selection at affordable prices. An extra hundred bucks in the budget will work wonders.