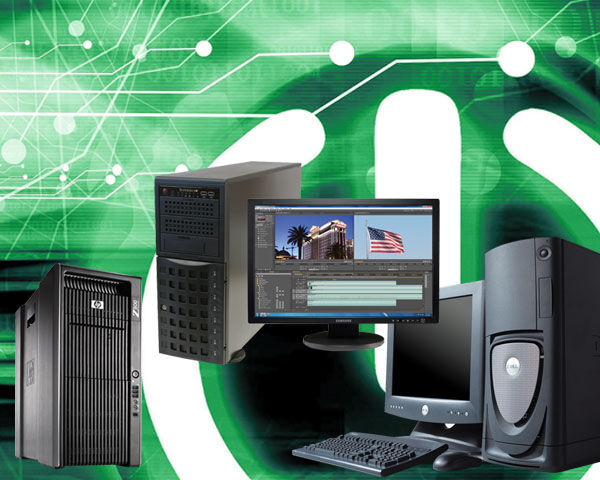 When shopping for your “perfect” editing computer, there are five important questions to be answered: 1. Should I get a PC or a Mac? 2. What specifications are important? 3. How do I get video into my computer to edit? 4. What editing software should I use? And 5. How can I share my video with others? We’ve got the answers next.

For PC users, it’s critically important to have a higher-end level of hardware in your editing computer. Why? Video editing requires more horsepower. But because PC systems are usually purchased ala-carte, there’s a wide range of hardware features and specifications you need to know about before you buy. We’ll discuss these later. Also, while many video editing applications can work on older Windows Vista or XP, they are more efficient and faster on the current Windows 7.

For Mac users, it’s really a case of picking a particular model, which has several customizable options.For iMac editing, the 21 or 27-inch model has these basic specs- i5 CPU, with 4GB RAM, and 1TB of hard drive space. Upgrade options include an i7 CPU, 16GB RAM, 2TB hard drive space, and Radeon graphics cards with up to 1GB on-board graphics memory. Prices range from $1200 to about $2000, not including upgrades.

For the Mac video editor who needs even more performance, the Mac Pro desktop is the ultimate solution, in either Quad Core ($2500) or 12-core ($3800) configuration. Any Mac model you choose will have the latest OS already installed (currently 10.8, or Mountain Lion).

CPU processor power, RAM memory, hard drive storage, graphics card, and your LCD monitor are the five most important hardware features to look for in an editing computer. The Central Processing Unit (CPU) has evolved from the early single core Intel Pentium to the current multi-core Intel i5/ i7 models. The i5/7-series CPUs are best for video editing because they make your editing software run at top speed. This is critically important when it comes to the “rendering” stage- creating the final form of video, including any visual effects, transitions, titles, etc. Without the fastest CPU running, this final step would be excruciatingly slow!

It’s also important to have enough RAM (Random Access Memory). A typical off-the-shelf computer might come with 2GB of RAM. For video editing, this is not enough. You need at least a minimum of 4GB, and 16GB is even better. Why? Because video editing uses up RAM memory like crazy, and the more you have, the faster you will get the job done. Thankfully, RAM is cheap these days.

Hard drive storage is another important specification. The 500GB SATA HD typical on most computers is not big enough. HiDef video takes up a huge amount of capture space, so you need at least a 2TB internal SATA HD -or be prepared to expand your internal hard drive with a 2TB external.

The graphics card in your PC can make your video editing application more responsive, especially if you employing 3D transitions and other special effects. With maximized video ram on the graphics card, you will get higher performance.

Monitors are a final consideration. It’s best to select the largest widescreen LCD monitor compatible with your graphics card. Today, popular LCD monitors start at 21-inch but go up to 27-inch diagonal, and beyond. You might think a 27-inch is too big, but when you consider a single monitor screen must show multiple windows and also playback of your HiDef video project, a 27-inch widescreen monitor is not only practical but necessary. Such monitors are relatively inexpensive now (about $300).

And just in case you thought you had a lot of gear to check out, HP has just introduced an amazing all-in-one desktop PC, the 27-inch Z1– which appears to have most of the bells and whistles you need, or it’s easily upgradeable. Check out the links below.

3. Getting video into your computer

Before today’s HiDef camcorders, video was analog in nature. That meant that in order to edit it, you needed some way to transfer the analog video from your camcorder into a digital format for your computer. This transfer required an analog video capture card and it and was a laborious, real-time process. All early generation video editors were stuck with it.

Today all HD video is captured digitally, and most likely on a camcorders internal hard drive, or removeable media cards. The benefit of this digital video capture is it’s relatively easy and fast to transfer to your editing computer- whether it’s a PC or a Mac. This transfer is done through a USB port, present on all HD camcorders. And HD camcorders are smart- they recognize when a USB cable is connected to a computer, and set up the transfer process for you manually.

When it comes to choosing video editing software, it all depends on the computer platform you select. For Windows PC’s the popular choices are Adobe Premiere Pro CS6 ($700), Sony’s Vegas Pro 11 ($600), or Cyberlink’s new Power Director Ultimate Suite ($250). For Mac users it’s one ballgame- Final Cut Pro X ($300). Premiere Pro CS6 requires that you have 64 bit architecture in your computer, rather than the older 32 bit standard. Other editing software (like Vegas Pro 11 and Cyberlink Power Director 11) is compatible with either 64 or 32-bit computers.

For Windows PCs, there are also “lighter”, more affordable, but less powerful consumer versions available- Premiere Elements (under $100) and Vegas Movie Studio Production Suite ($130). For Mac users there is iMovie.

Once you have finished editing your video, you’re going to want to share it with your family and friends. Today, the most common way to share is through a DVD, whether standard definition, or the newer HiDef Blu-Ray. But you also might want to make a version that is uploadable on YouTube, or perhaps one that you could transfer to an iPhone, iPad, Android phone or tablet. Thankfully most current video editing software programs include an “output format” step. Here you decide how you want to share the final project.

For a disk sharing, your editing computer needs to have a DVD-burner, and preferably a Blu-Ray version. These Blu-Ray burners are affordable (less than $100), and they can burn either HiDef Blu-Ray or standard DVDs (+ or -)

To enjoy your finished video on an Android or an Apple i-device, you need to convert it. Many video editing programs now have the option to convert as the final step. One of my favorite standalone Windows conversion programs is ArcSoft’s Media Converter 7.5, which offers a huge variety of output devices and formats. For the Mac user, Handbrake works very well too.

The task of video editing is probably the most intensive of all computer applications. It literally stretches your computer to the limits of its power. But armed with the right tips we have just given you, your selection task for the “perfect” video editing computer should be much easier and help you put all the pieces of the puzzle together.