Put simply, ISO is how sensitive to light film stock is. The higher the ISO, the more sensitive your film and the less time it takes to expose it. See? Easy! Now we can move o- oh, wait. Nobody shoots on film anymore. Well, in that case, things just got more complicated.

ISO 12232:2006 is in turn based on ISO 5800:2001, which is the standard for color negative film that describes how chemically sensitive a film is to light, and therefore how fast you can make an exposure. The higher the ISO, the less time it takes to make an exposure. That’s why ISO is sometimes referred to as “speed”, as in “what’s your film speed?” This is not to be confused with shutter speed or frame rate (which is technically frame frequency, but that’s a different article), even though those things can also be measured through speed. Digital ISO is supposed to mimic analog (film) ISO. So theoretically, and all other things being equal, a digital camera set to ISO 100 should act just about the same as a camera loaded with ISO 100 film.

Obviously, digital cameras don’t have chemicals to expose, so the digital ISO standard is measured by your camera’s “exposure index”, which is how sensitive your camera sensor is to light combined with how good your camera’s firmware is at interpreting the signal from the sensor. Your camera controls the exposure index, and therefore the ISO, using “gain,” which is how much the raw digital signal from your sensor gets boosted before it hits the processor. This boost increases the power of the signal, but it also adds extra information, which your camera’s processor interprets as noise. Think of it as turning up the volume on a staticky radio broadcast — the music gets louder, but so does the static.

generally speaking, the higher the ISO you use on a digital camera, the more noise you’re going to get.

In other words, generally speaking, the higher the ISO you use on a digital camera, the more noise you’re going to get. In this context, noise is the blurring or distortion of the tiny details within an image — think the white noise static of an analog television — or, if you were born after 1990, what the TV screen looked like in Poltergeist when Carol Anne was talking to the ghost. Run to the light, Carol Anne!  It’s on YouTube. I’ll wait. Unless you’re going for a Blair-Witch-style–a deliberately lo-fi effect–it’s usually a bad idea to shoot with high levels of noise. If you really want that look, you can always add it in post.

Most digital video cameras have a “Native ISO” or “Optimal ISO” setting, which is the ISO on that camera that gives you the best signal-to-noise ratio, that is, the best picture with the least noise. If you’re shooting mostly outdoors, maybe you want a camera with a lower native ISO. If you shoot mainly interiors with available light, you will probably want a higher ISO.  Some cameras, most notably some Panasonic models, have “Dual Native ISO”, which just means that the manufacturer has optimized the camera for two “best” ISO settings, usually a low one and a high one.

As a general rule, and barring a camera with an unusual optimal ISO, you want to use the lowest ISO possible in any given situation, based on your lighting setup and your shutter and aperture settings. Traditionally, if you’re shooting outdoors on a sunny day with a shutter speed of 1/60 and a medium-to-high aperture, your ISO will probably be in the 100-200 range. Well-lit interiors call for about 800, and dimly lit interiors, 1600 and up. Modern digital cameras can go up to some absurdly high ISOs, into the tens or even hundreds of thousands, but very few shooters that I know ever go above 3600, except in very specific circumstances. Unless you’re hunting Bigfoot in the woods at night with no lighting equipment, you shouldn’t have to either. 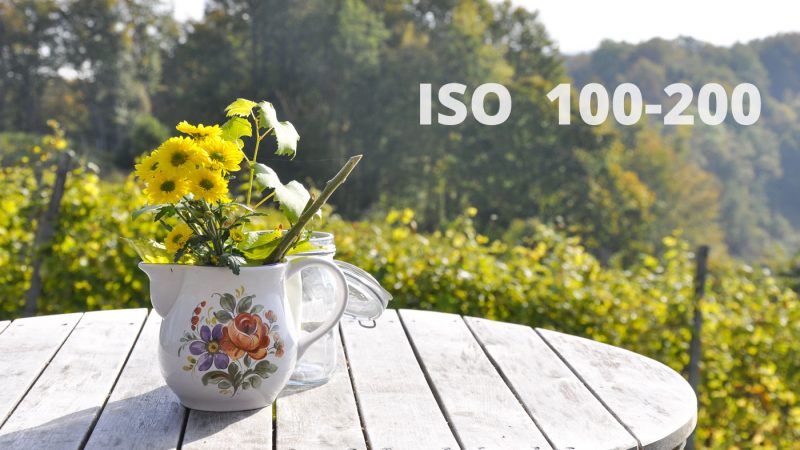 These settings are just a rule of thumb, and will vary widely based on your lens, camera, subject matter and shooting style. Personally, I often like to shoot with my aperture set very low to get a razor-thin depth of field, so my ISO is often set lower than the numbers I cite above. On the other hand, if you’re doing a deep, wide landscape shot, you’re going to need to crank that aperture up to maximum and dial the ISO up correspondingly. For more on setting your ISO in relation to your aperture and shutter speed, take a look at this article on the exposure triangle.

One last note about adjusting ISO in post-processing: if you’re shooting RAW, you can adjust the ISO of your footage in post. This is the equivalent of adjusting the gain in your camera, but usually yields inferior results. This isn’t always the case: some cameras have lousy processing in low-light environments and your editing software can do a better job, but that’s unusual. The only way to discover if that’s true for your setup is to try it out.

Mike VanHelder is a writer, producer and photographer living and working in Philadelphia, PA.