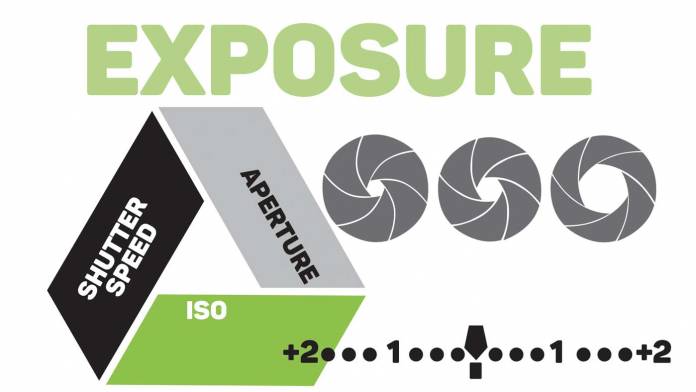 The exposure triangle is the most fundamental concept of image capture, yet many people know little about it. That’s because the electronics of our cameras are fairly good at guessing what things should look like. Most of the time, you can trust your camera. However, if you’re at all serious about photography or video, you need to understand how both work and the tradeoffs that come with each.

Simply put, exposure is the amount of light your camera’s digital sensor absorbs. Sometimes you want this to be a lot of light, and sometimes, very little. For instance, lots of light a beach scene at noon or not much in a spooky parking garage at midnight. Get the exposure wrong, and your beach scene at noon will look like you’re seeing it through a welders mask; Your parking garage won’t be spooky at all.

Simply put, exposure is the amount of light that your camera’s digital sensor absorbs.

There are three things that determine your exposure: your camera’s shutter speed, its aperture and sensor’s sensitivity. Sensitivity is measured in either ISO, ASA or Gain, depending on the camera. Each of these variables has a gremlin riding on its back. That is, it changes something other than your exposure. Consequently, many people throw their hands in the air and set their camera on auto to be done with it.

The three points of the exposure triangle

There are several ways to arrive at the correct exposure. Unfortunately, changing one setting on the exposure triangle means that at least one of the other two may need to be changed as well. All the while keeping in mind the side-effects that go along with each of these variables.

Shutter speed: This is the fraction of a second the sensor is exposed to light. As numbers gets BIGGER the exposure gets DARKER.

Aperture: This is the width of the diaphragm letting light in through the lens to hit the sensor. As numbers get BIGGER the exposure gets DARKER because the aperture actually gets SMALLER.

ISO/ASA/Gain: This is the sensitivity of the sensor to light. As numbers get BIGGER the exposure gets BRIGHTER.

Each of these frames is a still image, and shown one after the other, they look like they’re moving. It’s a common mistake to confuse how many frames are being shown each second with the shutter speed. Shutter speed is simply how long the aperture is open whenever it captures a frame. Shooting at 1/125th of a second doesn’t mean you’re shooting 125 frames per second. You’re still shooting 30 frames per second, but each frame represents 1/125th of a second of exposure to light.

An honorary member of the exposure triangle: Neutral density filters

THis one isn’t on the exposure triangle, but it’s still important. If you’re shooting stills and you want a wide f-stop like f/1.8, you can pick a high shutter speed to make sure your exposure is correct. But if your subject is moving, a high shutter speed might cause your video to jitter; So what can you do? You can either lower your ISO or lower your lighting. However, your ISO can only go so low. Plus, if you happen to be using natural light, you can’t very well dim the sun can you?

Well, you sort of can. Neutral Density filters are basically sunglasses for your camera. They make everything a little darker by making it more difficult for light to get through. By adding ND filters, you can open your f-stop to get shallower depth of field without increasing your shutter speed.

For the most natural motion blur, keep your shutter speed at double the frame rate. Intuitively, for 30 fps, this this means 1/60th of a second. But if if you’re shooting at 24 fps its 1/50th, since 1/48th typically isn’t an option.

Cameras have a “native” ISO that they’re optimized for — often 160. Keeping it as close as possible to this setting will give you the highest image quality. To see how far you can deviate from this setting, do some real world tests and examine the footage critically. Larger sensors can usually shoot noise-free at higher ISOs than smaller ones. Some of these cameras are fairly good even up to and beyond 1600.

Focusing can be extremely tricky with very shallow depth of field. Consider using a viewfinder magnifier or external monitor when focus is critical. Also, plan your shots carefully so that you can smoothly follow people and keep them in focus as they move. In Hollywood, there are people called “focus pullers”. Their job is just to make sure the camera is focused properly as the camera and actors move.

Pull a rabbit out of your hat

As Nigel Tuffnel asks in “This is Spinal Tap” — When you’re on “10” on your guitar, and you’re on “10” on your amp, where can you go? When your ISO maxed out, your aperture is as wide as it can be and your shutter speed is as low as it goes, where can you go? The answer is simple. Instead of trying to capture more light that isn’t there, you can add more light. Do this by either by using artificial lights or moving the action closer to better sources of natural light.