As a filmmaking term, shutter angle references the basic function of film-based motion picture cameras. In order to explain what a shutter angle is, we must first discuss the mechanics of the film-based camera system. Traditional film cameras create images using photographic emulsion as a recording medium, and this requires a shutter mechanism to control exposure time. There is a basic correlation between frame rate and the rotation speed of a camera’s mirror shutter. It is important to note that much of the way a contemporary digital cinema camera operates comes from the rudimentary function of film cameras and their film transport systems.

There are four essential components of a film transport system in traditional cinema cameras: a movement, a gate and a rotating shutter with a rotating mirror. Each of these components must function in synchronization as film moves through the camera. Its journey takes it from the film magazine through the gate, where it is exposed to light. Then the film gathers back in the magazine for removal.

The movement consists of a motor transport system that uses a series of sprockets on a drum system. This drum effectively pushes or pulls a load of film through the camera–across the gate ⁠— a rectangular opening that exposes film to light.

The camera uses a rotating shutter to control the interval at which light can strike the film when moving through the open gate. Think of the shutter as a disk, like a pie with a slice cut out. That slice can be adjusted in size. The bigger the slice, the more time light has to strike the film plane during exposure. The shutter must be timed so that, as each new frame of film is presented in the gate, exposure happens in a fraction of a second. At this time, a new frame advances into the gate, while the previous frame moves through the remainder of the movement toward the take-up reel inside the magazine. Projectors implement a similar process when projecting a film, only it emits light rather than collecting it.

In the interval, while the shutter is rotating in and out of position, exposing each new frame, a rotating mirror, moving in sync with the shutter, allows for direct viewing of the image through the lens via a beam splitter. As the mirror alternates with the shutter, the image appears to flicker inside the viewing system of the film camera.

The frequency of the flicker relates to the speed at which each frame is moved into position, exposed or projected and then advanced through the system on a reel. This persistence of vision allows for the film-like quality demonstrated by digital cinema cameras that capture video images via 24p.

The frame rate is the timed interval the film transports through the gate. We use two primary frame rates when recording with film or digital video. Film cameras traditionally record at a rate of 24 frames per second (fps). At this rate, the human eye perceives motion in a rapid succession of individual images projected onto a screen. Subject motion appears normal, with a minimum of image blur, while lip flap appears to match the audio we hear associated with the images. Video systems record and playback at a slightly quicker 30 fps. This is related to the field scanning rate of television, which happens in odd and even lined intervals inside of 1/60 of a second. This field recording technique is known as interlacing.

What about different frame rates?

Effective shutter speed can be calculated using the following formula:

Frame rate multiplied by 360, divided by the angle in degrees, is equal to the effective shutter speed.

As an example, if we plug in some numbers, we see the relationship.

In each of the above situations, in order for the shutter disk to be clear of the gate for exposure at high frame rates, it must be in sync with the fps. Thus, the higher effective shutter speed.

When image blur must be curtailed — as in shooting green screen elements — but the frame rate stays at 24 fps for the sake of sound recording, how do we calculate the necessary shutter angle?

We can calculate the shutter angle using the following formula:

The project frame rate, times 360 and then divided by the shutter speed, equals the new angle.

Let’s plug in some faster shutter speeds for freezing action.

Using this method, we can freeze motion better for cutting in our plates. However, there is a caveat one must consider. At narrower shutter angles, a subject in motion can appear jittery on screen. This is the strobe effect and can be very disconcerting for the audience. For this reason, choose narrow, skinny shutter angles with caution.

The strobe phenomenon can be an effective tool to imply moods or tones like adrenaline. The D-Day scene from “Saving Private Ryan” (1998) uses the effect effectively. Director Steven Spielberg and cinematographer Janusz Kaminski used the “skinny” shutter effect to accentuate the feelings of anxiety, fear, and adrenaline soldiers experienced in the WWII invasion of Normandy.

If a faster shutter speed comes from a narrow shutter angle, then the opposite is also true. At wider shutter angles, effective shutter speeds slow down. This results in a dreamy or smeared look to images in motion within the frame. Photographers refer to this as “dragging” the shutter. Objects in motion will blur dramatically with regard to their apparent motion. A classic example of this is the scene from Wong Kar-wai’s “Chungking Express” (1994), where the hero chases his adversary through a busy Chinese market.

The term electronic shutter describes the electronic process of controlling exposure time in a digital cinema camera using a CMOS imaging sensor. Many modern digital cinema cameras can adjust the equivalent of an electronic shutter angle. In typical cases, the camera does not have an actual rotating mechanical shutter. Rather, the adjustment controls the amount of time that the electronic image sensor is energized with the light from an exposure to record video. Because there is no need to mechanically advance film in a video camera, the shutter can be adjusted to fully open — 360 degrees — to stay open for the entire interval period. In this way, we can use electronic shutter angle as an exposure balancing option outside the traditional variables of F-stop and ISO described in the exposure triangle. 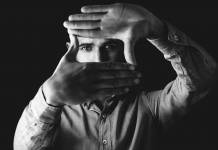