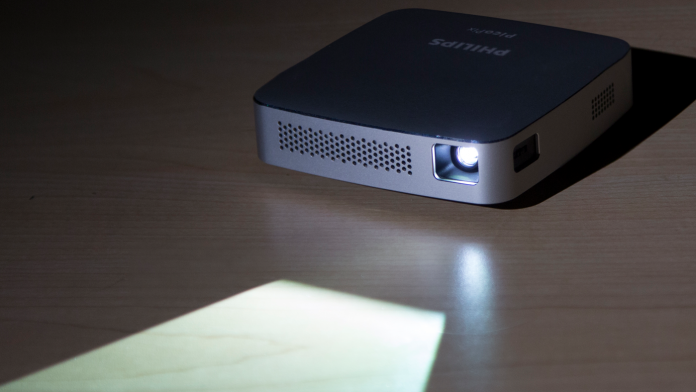 While the Philips PPX5110 PicoPix mobile projector isn’t perfect, it still delivers on the all the important fronts, making it a viable option for on-the-go content sharing.

Pico projectors, loosely defined as projectors able to project content from devices like smartphone, cameras and tablets and small enough to fit into your pocket, are notorious for struggling to find a good balance between portability and power. Some picos offer higher portability at the expense of lumen rating (the brightness of the projector) and resolution.Other picos sport all the right specs, but are a little too bulky to fit easily into your pocket or travel bag.

However, the PPX5110 does a rather good job at blending those two aspects together. While offering 100 lumens of brightness, it still stays lightweight at a compact 3.9 x 1.1 x 3.9 inches and 7.6 ounces, making it easy to fit into bags and even most pants pockets.

When compared to its predecessor, the PPX4935 projector capable of outputting 350 lumens, the PPX5110 opts more for more portability over impressive specs, but with a price of 300 bucks, it’s much more accessible to those who want an easy and affordable means of sharing content from their mobile devices.

The PPX5110 PicoPix is a portable pico projector that connects to devices wirelessly through Bluetooth or through a wired HDMI connection. The projector can connect a good number of devices, including digital cameras, notebook PCs, tablets and both iOS and Android smartphones. However, it doesn’t have any SD/SDHC slots, so it can only display content that’s either streamed directly through HDMI connection or through Screen Mirroring, which wirelessly displays your device’s screen through the projector.

The projector’s screen resolution is 854 x 480 pixels, and it has a standard aspect ratio of 16:9, a contrast ratio of 1000:1 and an overall brightness of 100 lumens. Now, while you may be thinking the 854 x 480 is pretty low resolution — and it is — it’s actually a pretty typical resolution for pico projectors, so the PPX5110 isn’t lacking in that department when compared to others picos in the marketplace.

The actual size of the image is ultimately determined by how far you place the device from the plane on which you will project your image. Philips recommends having a projection distance of 21 to 125 inches, allowing the image to land anywhere between 20 to 120 inches in size. When changing the placement and size of the image, there’s a manual focus wheel on the side of the device. If you decide you want a bigger projection size, you can focus the image after you move the projector back. Note that if you don’t have a tripod to attached it to — it has a standard tripod mount on the bottom — the bottom of the projection will be cut off unless you have the projector near the edge of the surface supporting it. This happens because the projection lens isn’t tall enough to fully project its entire image if, for instance, it’s put in the middle of a large table without something holding up the entire projector.

The projector also has a built-in 1900mAh/3.7V battery that lasts up to 70 minutes on a single charge. Though this is a standard battery life for Picos, we still can’t help but feel that it’s not enough for a mobile projector meant to display feature films that usually run 90 minutes. But you can thankfully still use the projector as it’s charging through an outlet. Also, with that battery life, it can play a good number of YouTube videos before the battery goes out, but we wouldn’t recommend watching a full length move on it without it being plugged into an outlet. The projector can also be used as a power bank to charge your phone, and it has built-in 1W speakers that are actually one of the highlights of the device; the volume the provide is loud enough to fill the room.

First impressions of the PPX5110 started out strong. It’s light to hold and it didn’t take up much space on the desk. (In fact, I’ve had it sitting in its box at my desk for a few days now and it hasn’t felt at all intrusive.) But before I could use it for the first time, it had to be charged for five hours. It came with a power cord with three different interchangeable outlet heads for different countries (US, EU and UK), which is helpful for frequent travellers.

After it was done charging, we proceeded to turn on the little projector and were pleasantly surprised by the brightness of the device’s white standby screen. This was outside underneath the noon sun, so obviously the projection, which is at its best inside in a dark room, was nowhere near crystal clear, but for displaying in afternoon sun, it was pretty satisfying brightness.

From there, we connected the projector to a Microsoft Surface Pro 2017. The process of linking the tablet to projector was very simple. All we had to do was select the projector from the device list after selecting that I wanted to mirror onto a device wirelessly. After finding and selecting the device, the tablet’s desktop screen popped right onto the wall onto which the PPX5110 was projecting.

When later linking the projector to a Samsung Galaxy S7 smartphone, the processes was just as simple. All that was required was to pull down the phone’s top menu at its home page and select its Smart View app (which Phillips calls Screen Mirroring, but on newer Android phones, it’s called Smart View). After that, the phone was able to locate the projector and connect to it. Once connected, the projector projected the phone screen almost instantaneously without a hitch.

Overall, the PPX5110’s image quality is good, really shining when the image its projecting is full of bright colors and big subjects. For instance, I had a lot of fun going through all the brightly colored games I had stored on my computer.

But once you get past the initial looks, you can start to notice that the projector is better at projecting the larger elements of an image than the smaller details. For instance, large text appears very crisp and clean, but when the text is small, or even average sized, it appears to be highly pixelated to the point of it being unreadable. When comparing the PPX5110’s text quality with another pico projector from Philips, the PPX4350, the difference was like night and day. With the PPX4350 — a 640 x 360 pixel resolution, 50 lumen pico projector that’s even smaller than the PPX5110 — the text, regardless of the text size or the size of the projection, always appeared very clear, clean, and, most importantly, legible. Sadly, we can’t say the same for the PPX5110. Even at a lower resolution rate, the PPX4350’s text was clearer than the PPX5110’s text, which is rather strange because a lower resolution rate usually means for higher pixelation. This is definitely something to take into serious consideration if you’re planning to use the PPX5110 for something like PowerPoint presentation. However, small text on the projector does becomes slightly more legible if you venture into the device’s larger screen sizes. You can make the screen size larger by simply pulling the device away from where its projecting from.

The PPX5110 did a good job at displaying the sample footage we had stored. We didn’t experience any blatant pixilation like we did with the text, and the contrast was good. At some points, like when viewing content with dark shadows, we could see that the contrast in the image isn’t as deep as it was on the screen I was projecting it from, but it was still passable and it didn’t take away from the content being displayed. Finally, as we pulled the device back and forth to try out different projection sizes, we didn’t see any real notable difference in the image quality after refocusing.

It’s worth noting that the audio on this tiny projector is actually quite loud. The device itself doesn’t have volume control; the volume is synced to the device you are using, so if you were to turn up the volume on your phone, the device’s volume reacts accordingly. The device is loud enough to fill a large room, but if you want to have even more audio power, or a more personal audio experience, the device has a headphone jack, so you can connect it to some speakers or headphones.

There are a number of pico projectors out there that vary slightly from the PPX5110.

Lastly, for a even more affordable projector, there’s the Magnasonic LED Pocket Pic that has a resolution of 640 x 360, 25 lumens and a screen size that goes from 10 to 60 inches. It’s price is a very low 149 dollars.

Philips’ PPX5110 is a good pico projector that gets the job done as promised. It’s highly portable and the projection is bright enough to enjoy. It also has a very easy setup: turn on, connect and done. For a reasonable 300 dollar price tag, Philips’ PPX5110 is a safe choice if you’re looking to share videos on the go.

The Philips’ PPX5110 is a small, compact pico projector that can wirelessly connect to a device’s screen, allowing it display media saved on the device or mirror what your device’s screen is showing.