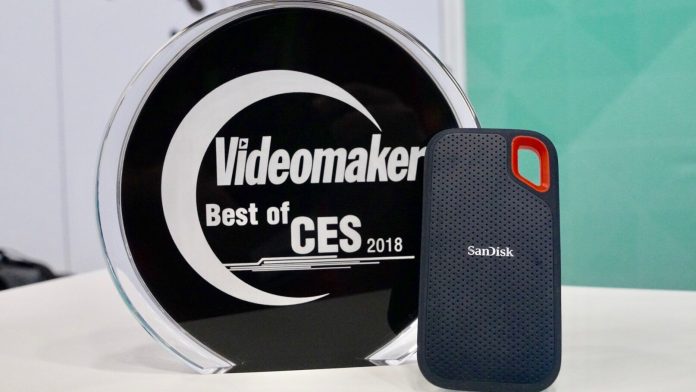 At CES 2018 this week, Western Digital unveiled a few new SSDs, including the WD My Passport Wireless SSD and the SanDisk Extreme Portable SSD, which garnered our Best Storage of CES 2018 award.

The SanDisk Extreme Portable SSD is intended to be used for saving and editing hi-res videos and photos on the go. It’s listed to have read speeds up to 550MB/s and has capacities available up to 2TB. It also has a IP55 rating, meaning is should be able to withstand all the rain, splashes and dust you may come across during your shoots.

The Extreme Portable SSD works with both Windows and Mac and includes a USB 3.1 Type C connector, USB-C to Type-C cable and a Type-C to Type-A adapter.

For more information, go to SanDisk.com.

The big pitch with the My Passport Wireless is that it’s not just a storage drive for cameras, but also for drones. With that in mind, it has to be portable, since you’re aerial videography almost always takes place on location. Luckily, WD says that the My Passport Wireless is ready for on-the-go use, featuring a one touch copy button that lets you backup your files with either its SD card reader (which can read up to 65MB/s) or integrated USB port without needing a laptop or software.

When using its USB 3.0 port, you can expect to see read speeds of up to 390MB/s. Also, WD says the My Passport Wireless SDD can create its own 802.11ac WiFi connection, giving you the option to connect to your drive to save files and also stream 4K video on your phone or table with the My Cloud app.

And with its SSD interior covered with an exterior protective bumper, WD says that your data will be safe from shock, vibrations and drops up to 1 meter.