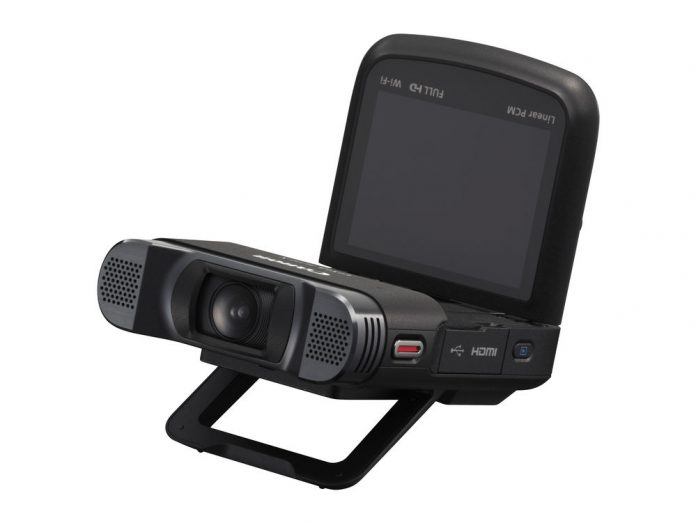 Small cameras don't always consider themselves personal, well, the VIXIA mini X compact personal camcorder does. The slim VIXIA mini X contains an f/2.8 fisheye lens that can shoot at 150-, 160-, and 170-degrees. A 12.8MP sensitive sensor demonstrates some dedication to image quality, and the Linear PCM audio recording extends the quality adherence to the built in mic. Also built in is an adjustable stand for up to 60 degrees in addition to the standard tripod socket. The slow-motion modes do record at reduced resolutions, half speed at 720p for example, and should allow for a lot of playful use and stimulate creativity. The VIXIA mini X is $400.

Three Canon HF cameras come to CES 2014, and goes without mentioning the hundreds of Canons that press and other attendees will bring. The VIXIA HF R52, VIXIA HF R50, and VIXIA HF R500 are the updated camcorders from Canon this year. Canon so happens to be the camera maker of choice, for thousands of videographers, so these cameras are noteworthy even if you've already compared cameras like these. The solid imagery is sure aided by consistent recording capability of MP4 at 35Mb/s and AVCHD at 28Mb/s.

These three gain improvements, now with a 3.28MP CMOS sensor, SuperRange Optical Image Stabilization, and 57x zoom. One area which these differ is internal memory, the HF R52 has 32GB built in, while the HF R50 has 8GB, though there's still the SD card slot. One aspect these two also come away with is built in Wi-Fi which will help with Canon's CameraAccess plus app.

In the spirit of creativity, Canon ensures that videographers have options, so there are seven Cinema Look Filters which are available, in camera, during record or afterward. While it may be second nature for Canon, having a microphone and headphone terminal help videographers take the step to becoming professional. On this note, check out the Dual Recording mode as video can be recorded as MP4 and AVCHD at the same time.