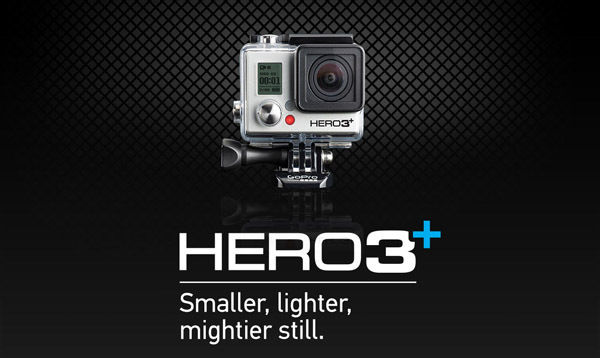 Smaller… lighter… better in a tight squeeze with more battery power to boot! GoPro announced today its newest upgrade, the GoPro Hero3+.  This is an upgrade to the Hero3 Black Edition and Hero3 Silver Edition cameras. The GoPro Hero3 White Edition remains the same. The GoPro line of cameras is revolutionary, packing a lot of video punch in a small package. It enables true mobility, allowing the camera to be placed just about anywhere and in all kinds of environments. It allows the world to gain a new perspective. Here’s a look at the upgrades.

The upgraded battery is the same size but now boasts a 30% longer lifespan. The Wi-Fi speed is increased four-fold for transferring files between the camera and mobile devices when using the GoPro App. The new lens remains the same size as it was before but offers sharper video with increased image quality, whether this is due to new coatings, manufacturing processes, or materials is unspecified. There is also what GoPro calls their new SuperView feature that offers a wider angle of view. This seems to be a good feature for GoPro considering the adventuring uses of the camera in situations that call for it to be mounted but not necessarily monitored. The GoPro Hero3+ Black Edition carries a suggested retail price of $399.99.

The mic placement on the Hero3+ has changed to one side and the top of the camera where it was formerly on both sides. This coincides with improved audio recording as stated by GoPro with its advanced wind-noise reduction. Prior to this release there were rumors of increased frame rates for 4k and 2k, but these remain unchanged in the Hero3+.

So… where can YOU Go?