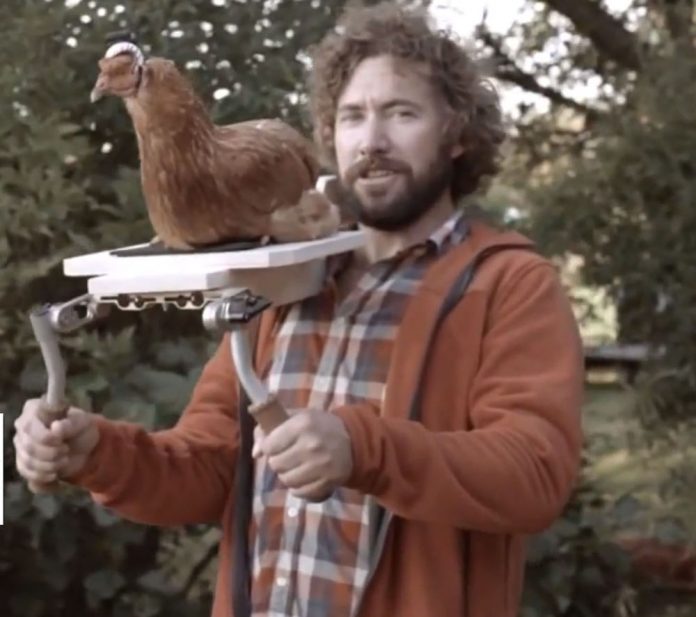 It doesn't take a lot to make a viral video other than luck to get the first few views. What makes them work well, however, is a good story, compelling content, and good pacing. Throw in a chicken, and you have one well-made spoof leaving some people thinking, "how did they do that?" like in this LG G2 OIS camera commercial.

Coming up With an Idea

The best videos start with an idea. If you're going to shoot a spoof, like this Chicken Cam, you need to sit down and consider what the story will involve. Props, actors (animals!) and technical needs such as gear and crew. Jot down notes, beginning to end, how you visualize the story playing out. In the beginning stages, do't worry about props and angles — just story.

Once you have an idea, consider the classic story arc and what motivates the actors. In this case, the actor wants to create a better stabilizing device for his camera, then he discovers chickens have an uncanny way of keeping their heads level, despite their bodies moving around. Now, the next part of the story is the conflict: how can he use this chicken's talent to make his videos? The conclusion, of course, is a successful ending, and product placement by LG, because, after all, it IS all about LG's G2 OIS camera with image stabilization built in.

Gathering the Gear, People and Crew

Once you have the idea formed, jot down the gear you need and the people to run it. Your background or non-speaking characters can be anyone from the kid next door to Aunt Fanny, but your main characters have to be able to pull off a believable performance naturally. Do you need a huge crew? Or can you Lone Wolf it? You should set yourself aside to be the one who oversees the production, like the director, if you're working with a larger crew, rather than get too set on one duty where you won't be able to watch what the rest of the crew is doing. If you're working with just a couple friends, trust your skills and their abilities, and you might want to control the most important position.

Don't forget about audio. We're always saying audio is 50% of the story, but it's more often than not MORE important than the video. Remember, your audience might forgive lower quality video if the audio is good.

Now that you know the gear and crew you need, make a quick storyboard on the angles you want to shoot. Visualize how that low angle of the camera looking up at the chicken on the shoulder-mount might look. Do you see garbage in the background that will distract viewers? Clean visuals are best, dirty backgrounds are clear indications that you are a novice. If the viewer will be wathcing this on a mobile device this is even more crucial. Cluttered scenes make the main subjects blend into the background on a small screen.

Putting the Story Together

In the Chicken Cam story, the lines are clearly scripted, but they do sound natural. In a "Man on the Street" type of interview like this, you can let the actor do some ad-libbing to make it sound natural. You can actually leave in some of the vocal pauses, like "ahhh" and "ummm"… it helps make it real.

When it's time to edit, be tight. The best comedy is tightly edited. Keep your peice short, concise and without redundancies. A three to five minute video is all you need, anything longer and your audience might fall off. They're watching at work, on their phones, while standing in line at the bank and don't have a lot of time to commit. They also have a lot of distractions. Unlike traditional TV viewers who make the commitment to sit down to watch a show, online video is a catch-as-catch-can process.

The only way a viral video goes viral is for people to see it, so once you have it, share it; with everyone, everywhere. On YouTube, Facebook and every video sharing site you can think of. It doesn't take much to make a viral video — just a good idea, some clean audio, interesting videos and a chicken… or maybe a kitten… or a puppy… or laughing baby… or…