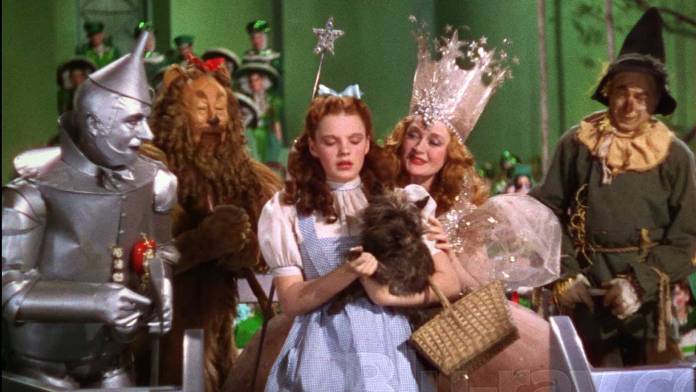 Deep shadows, rustling leaves, the soft tense giggle of children dressed in bright colors and masks making their way past the local cemetery. The headstones throw long dense shadows across the dark fall grass and the children shiver as they rush past the iron fence, casting glances back over their shoulder. Suddenly a giant form looms before them blocking their path.

Thus begins another Halloween tale. Or does it? When planning, ask yourself: Does the script have the essential elements that make up a good story?

In light of the season, we’ll show you a few examples of how a well-told terror of a storyline is all you need to engross your audience. We will look at how to write a solid story treatment with strong character and action development in a dramatic arc, following the steps of a great Classic of a Terror.

The movie, The Wizard of Oz, is one of the best examples of storytelling with a classic dramatic arc that includes character development, conflicts between good and evil, and challenges that are so well executed that film schools have been taking it apart and examining it frame by frame for decades.

Every good movie begins with a good script. Great acting cannot redeem a bad script, but a good script can make up for a less than stellar cast. A good script comes from a solid treatment written by a writer who takes great care in crafting the story. A treatment is a long synopsis of your story. It focuses on the major characters of the story, both protagonist and antagonist, or more simply put, the good guy and bad guy. The treatment also includes the key plot points and conflicts met by the main characters, and it establishes the emotional undercurrents that run throughout the story.

To begin writing your treatment, you need to remember that every good story has two key ingredients: a character that we care about thrust into a situation or challenge that seems almost insurmountable. The story must have a beginning, middle and an ending. In the beginning, you need to introduce your characters and the world they live in to the audience. As soon as you establish the characters, thrust them into the main situation, problem or challenge they will face for the remainder of the story. Once your characters have met the challenge, solved the major problem or resolved the situation, the story comes to an end. However, creating a good story takes a lot of hard work and attention to detail.

The main character in your story must be someone the audience feels some emotional connection with, someone the audience loves or loves to hate. Dorothy, for example, is a sweet innocent farm girl from Kansas who is thrust into extreme turmoil, and we see all of her emotions and feelings unfold as the movie progresses.

You can create strong characters by giving them real human traits, emotions, beliefs and desires. You also need a strong supporting cast for your main character. When you are planning your story, describe your characters both in terms of their physical presence as well as their habits and thoughts. Be as specific as possible. The more you know about your characters, the more likely you will be able to explain how they will react in any given situation and the truer they will ring to the audience. You are creating three-dimensional beings that have to be believable, likable and human. Give them both good and bad traits. Every superhero has a weakness. Every bad guy has at least one good quality. All your characters must also have someone or something that challenges them.

The Situation, Problem or Challenge

After you have established who your characters are, you must throw obstacles in their path and provide conflicts for them to resolve. The main goal or challenge for the lead character should be something that is believable, seemingly insurmountable and perhaps life altering. Tornado, anyone? Well, if that’s not enough, let’s throw in a wicked witch and flying monkeys blocking your journey home.

Throughout your story, as the characters attempt to meet the challenge, throw more obstacles in their path, and include more conflicts, making it harder to accomplish their goal. Every time they seem to get close, throw them a new challenge. Think of climbing a slippery slope. For every three or four steps up the slope, the characters slide down a few. Following the Yellow Brick Road, Dorothy and friends make it past the enchanted forest, only to be stumped again in the poppy field. Overcoming that, they make their way to the Emerald City, but are barred from entry. Will they ever reach their intended goal?

The climax of the story should be dramatic, unexpected, yet totally believable.

When the characters have seemingly run out of options, give them one more boost to meet the challenge, resolve the conflict and accomplish their goal. This is perhaps the trickiest part of writing the story. The climax of the story should be dramatic, unexpected, yet totally believable. If the audience cares about your characters and you have done a good job of stringing them along and keeping them in suspense, the climax of the story should be very rewarding. At this point, let your audience see where the characters will go from here. Whether it is a happy or sad ending, the audience needs a sense of at least the completion of this chapter in the character’s life.

One way to create a good story and strong character is to use the idea of a character and story arc. Draw an arc and place on it every major growth point or situation met by the characters. The characters and their situation should always be moving forward with each major growth point or challenge noted. As each new challenge is met and the situation intensifies, the arc rises until you meet the ultimate challenge, there is a climax and the problem is resolved, moving the arc down again.

Read through your story and make sure the path of the characters and the challenges they face is continuous, with no breaks in logic or time and with no unneeded deviations from the main story. You want a few side stories to add to the complexity of the script, but these stories should involve the minor characters and should lead to complications for the main characters but not bog them down and distract the audience. Keep the story flowing at a good pace. Be very aware of time and make sure your characters are always moving forward and that there are no breaks in the timeline that would confuse your audience. This is called continuity, a very important concept in making your story more believable.

Make sure that the goal or need of your main character is clear and that the main conflict is obvious. Ask yourself if you care about what happens to the main characters and does their situation evoke an emotional response? Do you get wrapped up in the characters’ situation with a real need to know what happens next? If you have created characters that the audience can care about and provided tense conflict with suspense and a satisfying resolution, you should be able to answer ‘yes’ to these questions, and you won’t need Ruby Slippers to guide you back home.

Scary movies are unique in that they have as their main thrust the desire to scare and surprise the audience. As a director or writer, it is your job to create as much suspense as possible, so that your audience is always on the edge of its seat.

Some ways to do this include making sure you first establish characters the audience will really like and then put them in a situation where conflict surrounds them. Create a really nasty and very powerful demon, ghost, or killer. Add a growing touch of impending doom and increased tension by showing the audience something the main character doesn’t know is coming. Fold into the mix a surprise or two with added tension created by a sense of a ticking clock and severe consequences if the time is not met. Wrap it all up in a spooky, deeply shadowed setting and you have the makings of a good suspense movie.