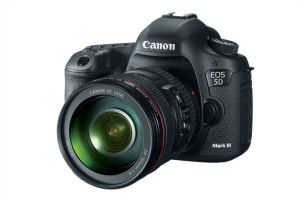 Canon announced the latest in their EOS line – the 5D Mark III Digital SLR camera. Set to be a choice between the 5D Mark II and the pro 1D-X camera, the new 5D Mark III will have a 22.3 megapixel full-frame CMOS sensor, 6fps continuous recording speed, a high performance DIGIC 5+ Imaging Processor and a 61-point high-density Reticular Autofocus system. The needs of videographers was high on Canon's list when setting up features for the Mark III which will have longer recording times, a built-in headphone jack for audio monitoring and better noise reduction.

With the pro shooter in mind, features like SMPTE timecode, Rec Run and Free Run (meaning you can synchronize cameras to start at zero and run continuous, or have them record actual time, which is great for multicam shooting and when recording audio on separate devices.) Features improved from the 5D Mark II include a reduction in moir and color artifacts found on shots with horizontal lines and improvement in the HD quality. Also improving on the Mark II will allow users up to 29-minute continuous recording time. [image:blog_post:12970][image:blog_post:12971][image:blog_post:12972] DSLR shooters of longer segments, like weddings and events will love the automatic file splitting and extended memory capacity using dual card slots.

Need to adjust the audio while shooting? No problem… the EOS 5D Mark III will have a 64-point manual audio level that you can adjust while recording. The DIGIC 5+ imaging processor in the Mark II is reportedly 17 times faster that the DIGIC 4 in the Mark II and other improvements include 6fps continuous shooting, HDR and multiple exposure modes, in-camera RAW processing, Scene Intelligent Auto mode and support for high-speed UDMA 7 Compact Flash memory cards. A bonus for still shooters is the high-performance 61-point high density reticular auto focusing feature, illustrated below.