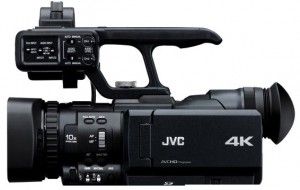 JVC has decidedly beat most camcorder companies to the punch by releasing the first ever handheld 4K camcorder at CES and it's a doozy. Using the power of their newly released Falconbird processor, the camcorder's 1/2 inch CMOS has more than 8.3 million active pixels and can deliver real-time 3840×2160 footage at 24p, 50p, and even 60p.

What's truly incredible is that at a time where most DSLRs and camcorders struggle to make Full HD, or 1080p footage record at 60p, JVC has already achieved 4K resolutions at the high frame rate. With this ability, JVC's new camera, called the GY-HMQ10 should be able to give even high end camcorders a run for their money like the RED Scarlet and the new EOS 1D X from Canon.

The only real issue most shooters may have is the size of the sensor. With more and more cameras sporting full 35mm sensor technology, JVC is decidedly behind the times on that front. The camcorder records in the MPEG-4 format at up to 144 Mbps – much more than the typical 24 Mbps that AVCHD recording offers. JVC also claims that the camcorder can record up to 2 hours of footage to a single SDHC or SDXC memory card making it more than capable of being used at live events.

As for the lens, the GY-HMQ10 has an f2.8 10x zoom with an optical image stabilizer making it a perfect handheld option. The camcorder also comes with a 3.5 inch touch LCD monitor and manual controls for audio. It has two balanced XLR connectors with phantom power which will come as a relief to those hoping for better audio quality from camcorders and DSLR cameras.

Oddly enough, JVC has included 4HDMI ports for delivering 4K real-time video feeds to a projector or monitor. This seems like an inconvenience since even plugging one cable into a monitor can quickly result in a jumble of cabling. JVC is really counting on 4K to be the next big thing to hit both Hollywood and consumer's homes with this announcement.

Of course with a price of $4,995, that could very well be the case. We'll just have to see if hardware and software editing technology can keep up. No one wants to wait several hours for a piece of footage to render.