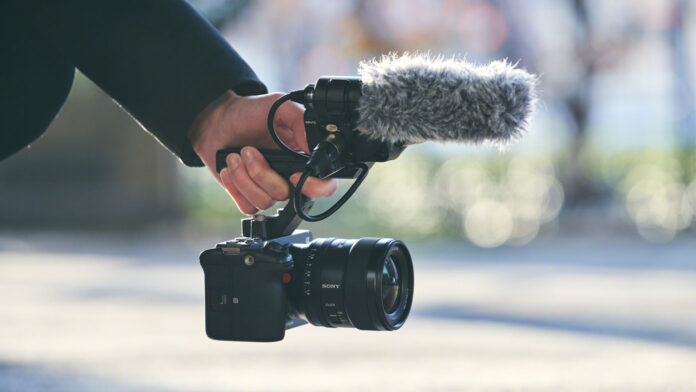 With the Sony FX3, Sony has leaped into the future, offering all the features in the popular Sony a7S III and tailoring them for video shooters. This article will discuss the features we factored in when choosing the FX3 for the Videomaker Editors’ Choice award for the Best all-around cinema camera.

The FX3 has a compact form factor for cage-free operation. At its core, the FX3 houses a 12.1MP full-frame CMOS Exmor R sensor, capable of capturing up to UHD 4K at up to 120fps and up to 240fps in 1080p. It captures internal 10-Bit 4:2:2 XAVC S-I recording with 16-Bit raw output via HDMI. With 15+ stops of dynamic range when shooting S-Log3, the camera also features S-Cinetone and HLG picture profiles. It has a detachable handle that offers 2 XLR/TRS inputs and exterior controls as well. With its phase detection autofocus(AF), the FX3 offers eye AF, allowing for reliable AF in a shallow depth of field. Additionally, the camera captures video using either dual CFexpress Type A or SDXC card slots. This gives mobility and expandability for solo shooting. There’s also no record time limits, so the FX3 can capture uninterrupted 4K 60p. Lastly, it has in-body image stabilization that, when combined with the power of Catalyst Browse, produces even more stable results.

In the Best Cinema Cameras Buyer’s Guide, the editors at Videomaker say, “The Sony FX3 is a feature-packed well-rounded camera. It’s user-friendly because it’s easy to use. If you’ve shot videos with any kind of dedicated camera before, mirrorless or DSLR, you’ll feel right at home using the FX3.”

Within Videomaker’s review of the Sony FX3, when talking about the ergonomics of the FX3, Multimedia Editor Chris Monlux says, “The handle feels really good and keeps you from holding on to the camera by the lens. Shooting from a low-angle handheld is a breeze. It attaches by two screws that adjust without tools. They are spring-loaded, so you can get the handle off without having to put it down. The audio connections are made via the multi-interface shoe and then secured to ¼ 20 mounts on either side of it.”

When summing up his experience with the FX3, Monlux says, “The image from the FX3 is great. It’s easy to use and offers so many options to a shooter on the go. This is a great cinema camera for content creators that are ready to up their game and create professional cinematic footage.”

The best all-around cinema camera is the FX3

The Sony FX3 rises above the rest; that’s why Videomaker has chosen to give it their Editors’ Choice award for the best all-around cinema camera. It has a long list of great features, a high-quality image and wonderful ergonomics that make it a great fit for a single shooter. Click here to learn more about the Sony FX3.