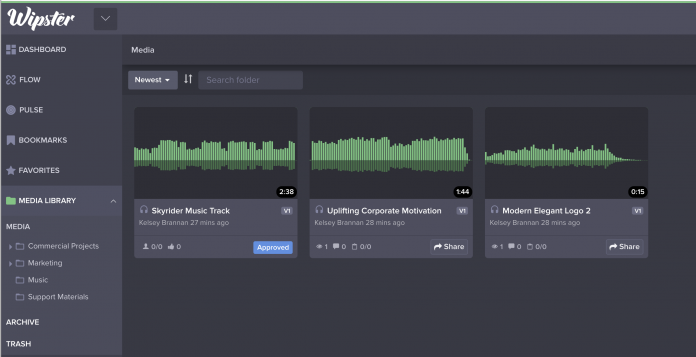 The video review and collaboration platform, Wipster, has announced its adding dynamic audio waveform review to its collection of features.

While enabling collaboration directly onto the waveform, it will also allow the addition of audio compatibility for .MP3, .WAV and .M4A files. Also, the company says video creators can now dynamically share and receive feedback in real-time. Additionally, they can eliminate email review from their workflow.

“We kept hearing how difficult it was for audio producers and video creators alike to share audio for feedback. Instead of simply storing a static audio file and calling it done, we wanted to create an engaging review experience that solves the real problem of getting fast, actionable, and organized feedback,” says Robyn Haugh, VP of Product at Wipster.

Different from other audio collab tools, Wipster’s new audio review tool is said to be the first to enable collaboration directly on the waveform.

Wipster describes the processes as simply dragging and dropping the audio into the platform. From there, Wipster encodes the audio and generates a playable waveform. After that, reviewers can listen, comment on, and download.

You can learn more about the video feedback platform on Wipster’s website. Also, the company is currently showcasing the new tool and more at NAB 2019.