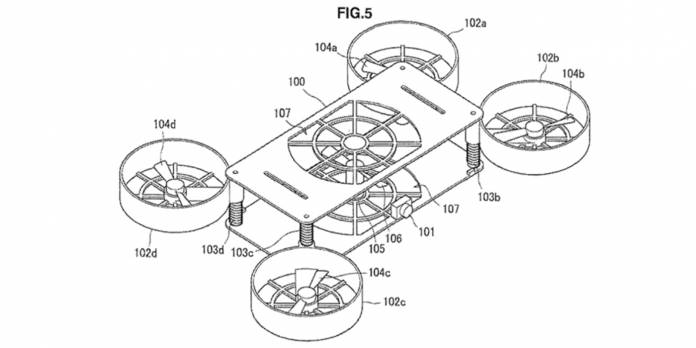 It’s been rumored for some time now that Sony is working on some kind of flying camera device. It looks like Sony is still serious about getting into the drone market.

Let’s take a look at the Sony drone

Looking at the designs in the patent, the Sony drone is foldable. When the drone is folded up and is in its “shell,” it looks a lot like a camera. It’s an interesting design for sure. So, how does the device fly? To fly, you need to take off its back cover. The back cover of the camera is the drone’s remote control and display. From there, the rotors rotate out of the body of the drone from its four corners.

The screen is a touchscreen, so the Sony drone is controlled through finger gestures. For instance, the patent seems to suggest you use the “pinch-to-zoom” gesture to make the drone fly closer to or further from a subject. The patent also shows you can turn the subject on the screen, resulting in the drone flying in an orbit.

Additionally, the patent shows the drone can take a group photo. It can automatically fly a short distance and capture the photo.

When will we know more?

As patents usually go, we need to take them with a grain of salt. Don’t take anything for granted until it is officially announced by Sony. The main thing we should take away from this patent is there’s a chance the Sony drone could materialize into something real.