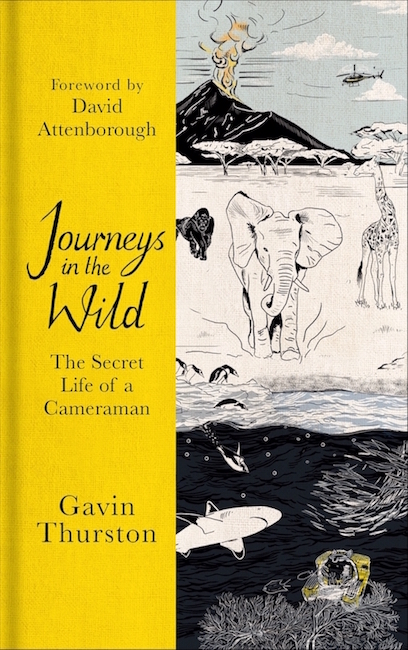 We introduced you to Gavin Thurston in 2016. He’s an award-winning outdoor cinematographer with hundreds of productions under his belt including the PBS series Nature, the BBC’s Planet Earth and several DisneyNature films. Gavin has been on, in and sometimes under every continent and won dozens of awards in his 30 plus year career. The UK native set out on a new journey recently, detailing his life as an outdoor cameraman. His book is called Journeys into the Wild and debuts in the US on October 29, 2019 in hardback. The Amazon Kindle version is available now.

If you are even slightly interested in wildlife cinematography this is a must-read. If you have ever wondered what goes on behind the scenes of those great nature documentaries Gavin Thurston gives it to you. The cover looks like a throwback to a children’s book from the ’60s and the Forward by Sir David Attenborough immediately tells you that this is no ordinary memoir.

Thurston says in the introduction that this is the story of his career. “This book is a meander through those highs and lows, with some plane crashes, wars, coups, near-death experiences and a kidnap attempt thrown in to boot.”

Each account in the book begins with a date and a location. You see latitude and longitude in a handwritten script written in the margin. (Yes, you can find the actual locations with Google Earth!) Each story told with Gavin’s British style and humor. He skips through time with stories about his early days shooting with the BBC all the way up to recent incidents on a wildlife series for Netflix.

The chapters titles include “The Glamour of TV”, “Finding Courage”, “Don’t Try This at Home” and “Kings of the Jungle”. Then each chapter returns to Gavin’s early days, then forward through the theme.

In the chapter “Buttered Side Up”, Gavin recounts many of his close calls. Fore example, he was in Kenya in 1994 working on a BBC documentary:

“To my horror, draped on the trunk I’m standing on, under an overhanging rock, is a huge python. And it’s sliding towards me. With the drop below me I have no choice. It is do or die. I run straight back along the trunk and leap over the python…”

Of course, the book is not all dangerous encounters. Gavin also gives a lot of space to putting you into his surroundings and describing the marvelous creatures he captures on film and video. Like in a submersible off the coast of Costa Rica shooting parts of the series Blue Planet 2. He writes, “As we sink down the light starts to fade. We pass a few small shoals of fish and odd squid swims by. Apart from that, there is little else to see, the water just gets deeper and deeper blue.”

Overall, Thurston’s book pulls back the curtain on the “glamorous life” of the wildlife filmmaker. We read his struggles with everything from wild animals to airport baggage handlers. Additionally, we get a glimpse into the heart of a man who genuinely loves his work and loves the outdoors. Ask for Journeys in the Wild by Gavin Thurston at your local bookstore. It’s available from Seven Dials publishing (an imprint of Orion Publishing Group Ltd. UK)