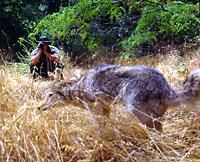 Getting close to animals, especially small, fast ones will help reduce the amount of shake in your shots. There’s a tendency to fill the frame with that raccoon you’re taping by standing far off and using your camcorder’s zoom control. The problem is that as you zoom in, your lens magnifies the camera movement just as much as it magnifies the coon. The result is nauseating, shaky video. To reduce the shake, move as close as you can, set your camcorder on a tripod and use a wide-angle lens setting.

Since it’s difficult to get close to animals in the wild, digital magnification (digital zoom) may sound appealing, but don’t be deceived, it’s not a good choice for wildlife. Digital zoom magnifies an image by selecting the center of the frame and enlarging it until it fills the frame. These Pictures become pixelated as they are magnified. The result is that the furry little critters you aimed to see, instead, have become chunky digital blobs that lack detail. Look for a camcorder with a long optical zoom, use a tripod and forget about digital magnification.

The advantages of manual focus for wildlife video are many fold. Automatic focus quickly drains power from camcorder batteries. It’d be a shame to run out of juice in the middle of the action. In addition, autofocus is an unpredictable beast. It often struggles to find and hold focus, especially when trying to focus on small moving varmints as they pass through branches and brush several yards away. Switch to manual focus and do away with the blurs.

As any good angler or deer hunter will tell you, sometimes you have to sit still a long, long time to get your game. Find a good spot in the woods. Arrive there early, maybe near a stream, lake or pond since many animals frequent them to get water. Camouflage yourself and plan to stay for several hours. Remember to bring a cushion, a snack and a cache of extra batteries. You don’t chase the best wildlife shots; they come to you.

Avoid the urge to narrate the action as you shoot. "Would you look at that! A North American reticulated ground squirrel! Run, run, run, scurry, scurry, scurry, up the tree he goes! Look at him go! Where is he? I lost him. Oh, there he is! What a cute little guy." Narration of this kind hurts your video in several ways. To start with, any noise you make might scare away the star of your show. And as you talk, your body moves, adding extra jiggle to your prize footage. Also bear in mind that narration that states the obvious is incredibly irritating to viewers. Hold your tongue and add those editorial comments (maybe none at all) in the editing bay.