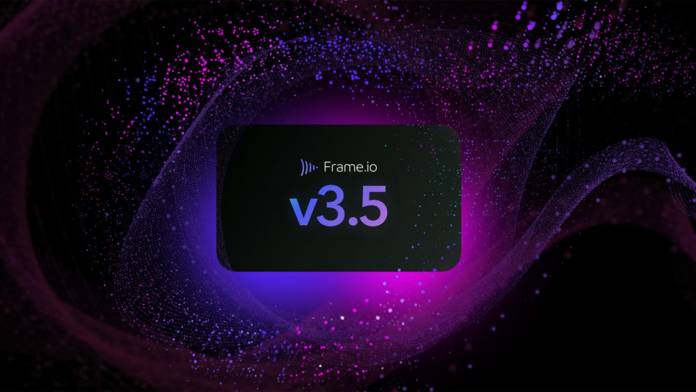 Framie.io v3.5 has been announced. Putting security at the forefront, the new Frame.io introduces new security controls to keep your content safe. It will also include some welcome new features.

The collaborative post-production platform has been one of the go-tos for video creative teams. One of its major highlights is that it allows an entire time and their clients to jump into a project and give direct feedback. Frame.io v3.5 adds to its offered features with range-based comments, a new iOS app and a larger search and filter tool.

This will make it easier for collaborators to communicate more constructively. For instance, if a full section needs work, the commenter can leave feedback on the entire scene, not just one frame.

It’s now possible to create a range by holding down the R key during playback. The range-based comments follow into the NLE just like all the other comments.

Frame.io says they’ve overhauled the player navigation to make scrubbing “smoother” and more “accurate.” Now, holding down the Shift key while scrubbing will allow users to control the precision of their scrubbing. It should be easier to find a cut point because of this.

You’ll notice there have been a few changes made to Frame.io v3.5’s search tool. It’s been improved to more “quickly” find a single asset and navigate to it, according to Frame.io. One of the more powerful updates to the search is its new ability to combine multiple filters. So things like dates, file type and uploader can all be a filter in the same search.

This one was a highly requested feature. Many asked Frame.io v3.5 for a hotkey combination that would switch between fullscreen and player controls. Now, tab and shift+tab switches between them.

Additionally, users can pick playback speeds from the settings: 1.25x, 1.5x and 1.75x. Also, by using the JKL keys, users can accelerate or decelerate from their default speed to 2x, 4x, and 8x — and they’ll see a speed indicator on the video.

Frame.io v3.5’s login-only sharing allows only approved reviewers can access content. Additionally, account-level controls allow admins to enforce this across the entire account. Teams and reviewers can also find their work more easily. All their shares are kept in one place.

The iOS 2.0 app has some of the new web features, like precision scrubbing. That allows users to move through a video frame by frame with the timecode in full view. Additionally, Read Receipts, a new File Information tab, and team-only commenting have been added.

You can learn more about Frame.io v3.5 on Frame.io’s website.