While similar in some aspects to the original Osmo Pocket, DJI has fitted the Pocket 2 with more mics, a new modular design and an upgraded camera.

Overall, the DJI Pocket 2 is designed similarly to the original handheld vlogging camera. Essentially, it has a stabilized grip paired with a 4K camera, making it a great fit for vloggers. Though the design is the same, the Pocket 2 upgrades a few aspects of the original. Let’s get into what those upgrades are.

Now, the Pocket 2 is powered by a 1/1.7-inch image sensor. The new sensor is larger than the Osmo Pocket’s 1/2.3-inch sensor. As for the video quality, the Pocket 2 still shoots 4K 60fps, which is the same as the original. However, DJI says that the Pocket 2 will support HDR video. The HDR mode will not be available at launch but will be released at a later date. The camera’s lens features a wider 20mm field of view with an aperture of f/1.8. Previously, the aperture was 26mm f/2.0. Also, the Pocket 2 is capable of 8x zoom when it’s set in its 64-megapixel mode. Additionally, you reduce to 4x “lossless zoom” if you move down to 16-megapixel mode or 1080p.

To better its audio, the DJI Pocket 2 doubles the original’s microphones, upping the number from 2 to 4 microphones. This should improve the overall audio capture quality, which was one of the problems with the Osmo Pocket. The microphones are able to adjust the audio based on where the camera is facing and will narrow the sound field when you zoom the camera in.

New users can swap out the bottom portion of the Pocket 2. With its new modular design, It’s compatible with a “Do-It-All” handle, which features a tripod base. There’s also a Wi-Fi and Bluetooth module, speaker, 3.5mm jack, and wireless microphone receiver. DJI is also offering a wide-angle lens and a waterproof housing.

The DJI Pocket 2 will be released on November 1st for $349 and will include the basic accessories. There will be a $499 kit which will add an additional lens, tripod, handle, and external microphone. You can preorder the Pocket 2 now. 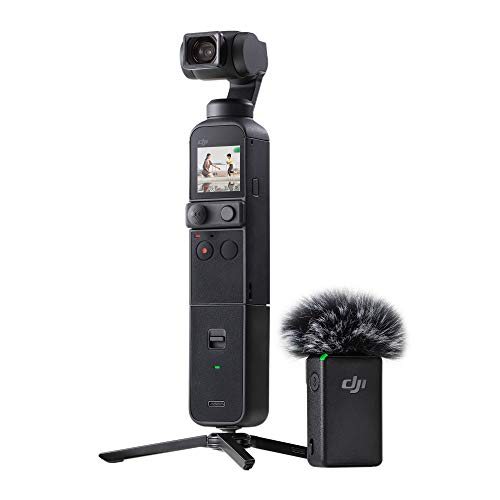