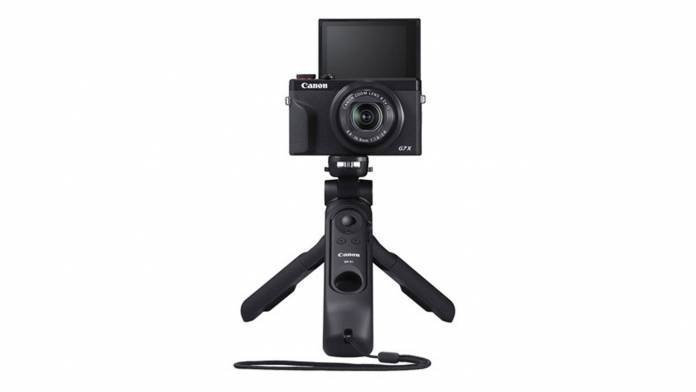 It’s been a big week for Canon. They’ve announced the development of the Canon 1D X Mark III, two new RF lenses, a stereo microphone and now a tripod grip: the HG-100TBR.

This duo grip and tripod looks to be lightweight and versatile — just what you need in vlogging accessories. Let’s take a look at it.

This is the first wireless tripod grip Canon’s ever made. The HG-100TBR was made with the PowerShot and EOS M series in mind. According to Canon, the tripod can hold cameras up to 1 kg. If it goes beyond that, it becomes unbalanced.

Get the right angle

When you mount a camera onto this tripod, you will have the ability to rotate the camera 360-degrees left or right. Also, you can lock the position when you find the right angle. So, you shouldn’t have to deal with the camera sliding into a different position while using it. You can also tilt the camera forward 45 degrees and back 90 degrees. Additionally, you can shoot vertical video on this tripod because the head can tilt to the side. However, vertical video is only an option if you’re shooting with a PowerShot G7 X Mark III or an EOS M200.

The HG-100TBR can be controlled wirelessly

There seems to be a lot of versatility when it comes to how you can control the tripod. You can use the BR-E1 in the same hand when it’s being used as the grip. You can also use it as a remote when the grip is switch into a tripod. It can start, stop, and restart recording. Additionally, you can control your camera’s shutter, zoom, recording, and AF for a distance. The zoom function is only supported by compatible Canon PowerShot cameras, however.