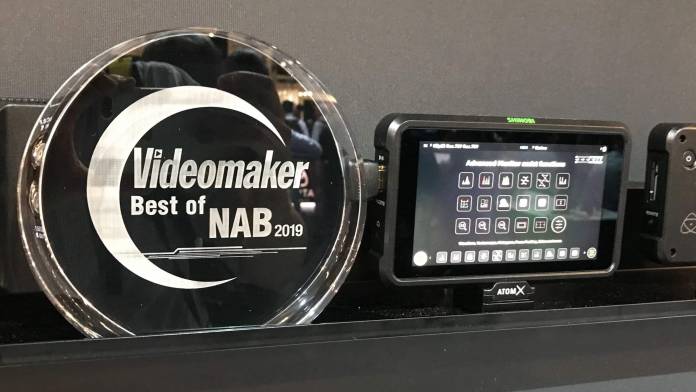 Congratulations to Atomos and the Shinobi for earning our Best Monitor of NAB 2019 award. The 5-inch Atomos Shinobi aims to be a great tool for vloggers and producers working on a budget who don’t need recording functionality.

By removing the recorder, Atomos is able to lower the Shinobi’s price to a budget cost of $399. Compare that to the Ninja V’s $695 price — a $300 difference!

Getting more into the specifics, the Shinobi sports a 5.2-inch 1000 nit anti-reflection uni-touch IPS panel. While it doesn’t support HDMI out, it can receive a 4K signal and display it in full HD through the HDMI input. Additionally, the monitor shares the Atomos Ninja V’s HDR 1920 x 1080 display and color processing.

The Atomos Shinobi seems like it’s made for vloggers since it adds flexibility to cameras that don’t have a flip out screen — an essential feature for vloggers who are recording content alone. And it won’t be adding a ton to the camera payload. It weighs just 200 grams. It’s built with Polycarbonate ABS construction, not aluminum like the Ninja V.

On the left side of the monitor, there’s a HDMI 1.4 input and a 3.5 mm headphone jack. On the right side, you’ll find a SD Card slot to load LUTs. You can load up to eight custom LUTs, still using the SD card slot. Also, there’s a wired remote terminal input underneath the SD card slot. Also, it has 1/4”-20 screw mounts top and bottom for ease of cage and adaptor rigging

The battery slot is located in the middle of the monitor. It uses the Sony type NP-F battery and reportedly uses less power. Battery life can last up to eight hours at 7800mAh, five hours at 5200mAh, and two and half hours at 2600mAh.

Congratulations again to Atomos! The Atomos Shinobi is out now for $399. Learn more at atomos.com/shinobi.