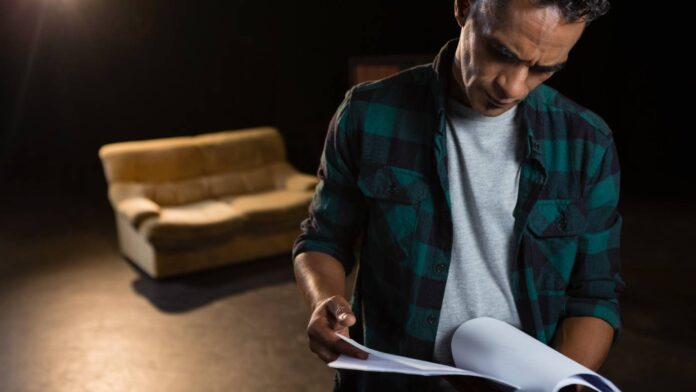 If there is one thing that you should take away from this article about writing a screenplay, it’s this quote by Aaron Sorkin, the legendary screenwriter for films such as “The Social Network,” “Steve Jobs” and “A Few Good Men”:

“Without a strong, clear intention and a formidable obstacle, you don’t have drama.”

What this means is: You need to have a solid foundation of intention and obstacles to create a compelling screenplay. Once those elements are squared away, you can effectively exercise your voice and put pen to pad to write your screenplay.

A screenplay is the script of a movie or a TV show or visual media that includes dialogue spoken by characters and a shot-by-shot outline of the film’s action. Essentially, it’s a written version of the movie. It sets out to engage and move readers just like a film and give direction to those making the film.

Why are screenplays important?

Your screenplay will be your communication tool for the story you want to bring into real life via a feature film, TV show or some other form of moving media. Also, it will be the central determinant of what the narrative will be. There is nothing more central to the process than the screenplay.

Components of a screenplay

The theme is the overall message of your screenplay and how it impacts your audience. It’s the message your audience will take home. Often, a good screenplay will have a memorable, timeless theme that will live in people’s minds long after watching the film or reading the script.

A good rule of thumb: The more authentic the theme is, the more likely the screenplay will succeed at what it’s trying to accomplish. The screenplay and theme have to connect in a meaningful, genuine way; it’s the only way to elicit an emotional reaction. If you can do that, you will have a powerful screenplay on your hands. One thing you can do to ensure the approach you’re taking is authentic is to question why you’re writing your screenplay. Ask yourself if it’s worthwhile dedicating weeks, if not months or years, of your life to writing about your chosen topic. If the answer is anything other than “yes,” you either should approach the topic from a different angle or consider another topic.

Coming up with a viable story idea is critical to all forms of writing, and it rings especially true for screenplay writing. It’s just as important as knowing how to write a screenplay.

Originality is very important in screenplay writing. It helps provide screenplays with a unique perspective to build up their authenticity. However, screenplay writers have to walk a fine line between authenticity and originality. When you deviate too far from what people expect, your screenplay runs the risk of being unrelatable. Finding a balance between original voice and authenticity is the key to making a memorable script.

An example of this idea is the film “Napoleon Dynamite” (2004). The screenplay tells the story of an awkward teen trying to fit in with his high school peers. Though this type of story has been told countless times, “Napolean Dynamite” is written in a unique, fresh way that puts a new spin on the tale. A lot of the script’s unique ideas came from one of the writers, Jared Hess, own experiences growing up in Preston, Idaho.

You don’t have to reinvent the wheel, but bringing something fresh to your audience while still making it relatable should be the focus of your screenplay.

In every scene of your screenplay, there needs to be the respiration process: an inhalation and exhalation that creates a rhythm and pace to the story. In many screenwriting books, this idea is called the call and response method. Essentially, this means that one scene’s actions will directly affect the following scene’s reaction. In turn, this leads to tension building that eventually leads up to the story’s conflict.

First drafts are hardly ever producer-ready. It will likely take a few rewrites to get your script to the standard you want it to be in. Going back to the screenplay to include new facts and add characters to bring the scene to life is part of the writing process. The screenplay will undergo constant evaluation, rewriting and reconstructing scenes to make the narrative work. The words aren’t written in stone until you paste your screenplay parts together to create a cohesive narrative. You may even have to go back and take some of your characters out or trim some of your scenes. This may sharpen your script’s narrative arc. Remember: less is more.

The goal is to take the writing beyond the didactic. The goal is to deliver it as a poetic vehicle that elevates it from the expository.

The ultimate goal of most screenwriters is to sell their screenplay. If you can sell your screenplay or script, a good rule of thumb is to value your screenplay at 10 to 15 percent of the production’s budget.

Depending on the production, you can get a few thousand dollars or several tens of thousands of dollars. It all depends on the scope of the project, who’s involved, the access and perspective on the story as well as licensing and rights negotiations.

One thing a production may do is put an option on your screenplay to borrow the rights to the story. This allows them to pitch it to other companies to see if it can get the screenplay adapted into a feature film. In this case, you would get a payout if a production picks up the option.

Making it as a screenplay writer

It’s important for you as a screenwriter to understand the current trends of the market and what the Hollywood system needs and wants. If you play the game right, you can make a lucrative career out of being a screenwriter.