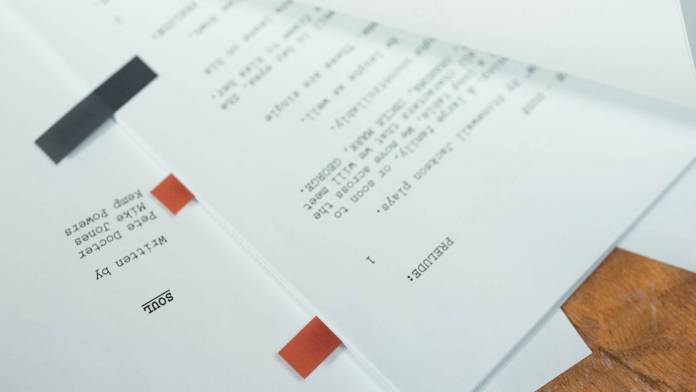 Almost every video you see on the big screen, small screen or mobile device used a script throughout its production. Scripts are the foundation of every video — they help keep a consistent message, tone and flow throughout and ensure everything runs as planned. While writing scripts can be similar to other forms of writing (essays, novels, speech writing, etc.), it has its own process and formatting you have to follow. Here’s what you need to know before you start writing your script.

Writing a script is defined as the act of writing out directions and dialogue for production crews to follow through the production process. While scriptwriting is most commonly associated with cinema, scripts are present in almost every video production. This includes webinars, newscasts, online events and even videos posted to YouTube by your favorite content creators.

Script lengths vary depending on the project. For films, the average script ranges from anywhere between 70 to 180 pages. Typically, they come out to be around 110 pages, though it could be a little less or a little more. A 110-page script equals out to be about a two-hour movie, so if you go past that page count, you’re creeping up into the ‘too long’ zone for many moviegoers. For instance, when Dan Aykroyd turned in his first draft of The Blues Brothers, it was 324 pages long. It’s safe to say his script had to go through many revisions before it was ready. For other productions, like YouTube videos, scripts might be just a couple of pages, giving the video structure and allowing for some improv if the creator feels the need.

Steps to writing a script

Starting from the ground up

Expose yourself to as many scripts as you can

If you’re new to scriptwriting, one of the best ways to learn how to write a script is to read as many other successful scripts as you can find. You can read many movie scripts online with the original formatting. After reading through the script, watch the video or movie alongside the script to see how the script’s directions were used in the final product. The more you read, the better you’ll understand the relationship between the script and the screen.

Start with a logline

The first thing you should write is your logline. A logline is a short, one-sentence summary of your story. The logline should give the reader a solid idea about the overall theme of your story, who the main character is, who the antagonist is and what the story hook is. The logline informs and excites readers, inspiring them to read your script. It also helps you define the central theme or topic your script is going to tackle. Think of it as a thesis statement for an essay.

Usually, loglines introduce the protagonist, the incident that will disrupt their world, the protagonist’s goal and the conflict that prevents the protagonist from achieving that goal. While loglines can have various structures, you should aim to include each of these elements.

Next, make a beat sheet

A treatment is a document that defines the overall concept of your story, summarizing all of its acts. It determines how you will approach your video. Video treatments start with the title. That’s followed by the film’s high concept, or the overall gist of what your script’s about. It then breaks down the story sequentially, going into detail with pivotal scenes. Essentially, you’re giving the reader a cheat sheet of all the most essential parts so they understand the themes, elements and tones you want to include in your film. It’s like the short story version of your final script. You can check out our comprehensive guide on writing treatments if you want to learn more.

After you have your treatment written, have someone review your work. The more eyes you can get on it, the better. Ask for what they like and what isn’t working. This way you can make adjustments before writing your script.

Outlining your script before you start writing your script ensures you follow a consistent and logical path as you write. In the end, it will save you a lot of time and effort in the editing process. Script outlines act as a blueprint that you follow throughout the entire writing process. It helps you keep track of character arcs, essential plot points and the pacing of your story.

Begin your outline by writing down every scene that you plan to include in your final script. As you go through each scene, jot down actions and anything relevant to the scene. It doesn’t need to be a play-by-play of the whole scene. You want to get a general idea of what’s going on in the scene. Be sure to include any dialogue as it comes to you. You don’t need to write out the entire conversation, but the more you have in your outline, the easier it will be to write out the first draft of your script.

Before you start writing your first draft, be sure to know the standard formatting rules for screenplays. There are industry-standard formatting rules you have to adhere to. Most producers won’t even look at your script if it isn’t correctly formatted. It will also set back your crew if they have to take time to understand what your script is trying to say. Here are some script elements and how they should be formatted:

After completing your script, it’s time to start editing what you’ve written. You might want to jump right into editing after you’ve finished, but it’s best to take some time away from the script you’ve written. Take about a week to two-week break to recharge so you can come into the editing process with fresh eyes. If you’re working on a deadline, even taking a day away can do wonders. Be sure to plan a rest day into your writing schedule. Rest is essential because it allows you to look at your script differently and catch mistakes you might have missed otherwise.

Once you’re ready to edit it, go through and cut out any unnecessary scenes or dialogue that might be running up your run time. You might also want to rework or rephrase parts to make sure they’re in line with your story’s theme or character’s personality in relation to their arc. Also, be sure that everything follows consistent formatting.

If you want to learn more about editing a script, you can read a more in-depth guide here.

Scriptwriting is both a creative and structured process. It requires you to think outside of the box. At the same time, it’s up to you to present those ideas in the industry-standard script format. Be sure to be as consistent with your presentation as you are creative without your plot in the final draft of your script.