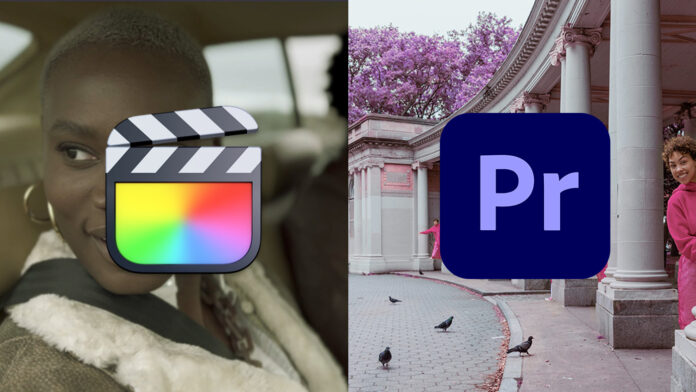 Adobe Premiere Pro and Apple Final Cut Pro are both excellent video editing software. However, they each offer their own perks and benefits, which begs the question: Which one is better? In this article, we will pit the two video editing applications against each other, Premiere Pro vs. Final Cut Pro, to see which one ultimately offers the best package for video editors.

When analyzing both applications, we will take a look at their affordability, workload, performance and features. Let’s look at the main differences between the two software editing packages.

Adobe Premiere Pro and Final Cut Pro offer first-class editing tools for beginners and professionals, either at home or in the studio. Many professionals favor Adobe Premier Pro. It’s a gold standard for the industry. It comes chockfull of pro-level tools and features.

Final Cut Pro, however, has evolved into an improvement in design and functionality. Beginning and professional users of Final Cut Pro favor the software because of its simplicity, making it easy to learn and use.

Let’s take a close look at each software:

Here’s what you get with Adobe Premiere Pro

Adobe Premiere Pro is a video editor for Windows PC and Mac OS X. It works with complementary applications like Adobe After Effects as well as 43 video, image and audio formats. It can handle many levels of professional media, including Apple ProRes, and can support native (RAW) camera formats, which include those from Canon, Sony, Panasonic, RED and ARRI. Basically, if you have a video file, Premiere Pro will most likely support it. It can even support XML — exported from Final Cut. Also, Adobe Premiere supports third-party VSP plug-ins and hardware controllers.

In Premiere Pro, you get a traditional yet flexible timeline. Adobe Premier Pro’s timeline allows you to drag and drop your content onto it. Your content on the timeline is called the Sequence and comes with Subclips, Subsequences and Nested Sequences. You can organize your content in sequence by scenes or shots. The master clip, also known as the source clip, can be edited into Subclips, which are useful for organizing lengthy shots. A nested sequence lets you place one sequence in another sequence to nest it. This lets you apply effects and edit the nested sequence as a single clip rather than reworking the various clips inside it.

For timeline tracks, Premiere offers Audio Mixer with features like volume unit (VU) meters, pan balancing, mute/solo and clipping indicators that allow you to create new tracks by dropping an audio clip in the timeline.

Here’s what you get with Final Cut Pro

In recent years, Apple Final Cut Pro has seen some much-needed updates and improvements. Those advancements include a simple interface that welcomes beginners. Plus, its one-step video output makes it easy to share your work to places like YouTube, TikTok and Vimeo. You can also prepare files for DVD, Blu-ray and mobile devices running Android and iPhone without leaving the program. Final Cut Pro also lets you tag video clips so that you can get them at any time. This helps reduce the time you would spend looking for what you need and devote that time to working on your video project. Final Cut Pro can handle various tasks, such as motion graphics, video editing and sound design.

Final Cut Pro uses Apple’s trackless timeline format called Magnetic Timeline. The Magnetic Timeline uses lanes rather than tracks and features a Primary Storyline to which all of the content is attached. You can assign “Roles” (labels) to sort your content. Final Cut Pro uses the Color Board for color grading and correction. The Color Board in Final Cut Pro easily rivals Premiere Pro’s Lumetri Color Panel. The Color Inspector tool allows you to use color wheels to add color grading and other effects to specific clips and even apply multiple effects to a single clip.

Final Cut Pro only runs on Mac systems, which lowers its accessibility for a good portion of video editors when compared to Premiere Pro. To run the program, your Mac needs to run on macOS 10.15.6 or later and have 4 GB of RAM, an OpenCL-capable graphics card, or Intel HD Graphics 3000 or later, 256 MB of VRAM, and a discrete graphics card.

Premiere Pro vs. Final Cut Pro: Who are they for?

Who is Adobe Premiere Pro ideal for?

Despite its admiration and use among professionals in the video editing market, Adobe Premier Pro does have some cons. The program suffers from occasional crashes with more complex workloads and projects. Video clips occasionally freeze when working with high-resolution clips, like 4K or RAW. Many video editors find this to be a nuisance when working on tight schedules and budgets, especially when video regularly freezes or skips frames during post-production. Along with a crash here and there, Premier lacks VFX effects and does not support offline editing. It also has a slower rendering speed than Final Cut Pro. This video editing software requires a continuing subscription to Creative Cloud priced at $21 per month (or $53 a month for the whole Creative Cloud suite), which can be expensive to some people looking for a career in editing.

Nevertheless, Premiere Pro is still widely popular among users. And even though it is geared toward experienced video editors, it still has an impressive UI that’s easy for all users to pick up. At the same time, it has all the tools that professionals need. There’s no question that Premiere Pro’s offerings and compatibility make it the obvious choice for many video editors.

Who is Final Cut Pro ideal for?

Final Cut Pro is the editing software of choice for many directors and animators. For instance, films such as “X-Men Origins: Wolverine” (2009) and “The Social Network” (2010) used Final Cut in post-production. While many professional editors have found Adobe Premiere Pro ideal for creating high-quality videos, others have found Final Cut Pro to be far more versatile at handling a wide range of video editing tasks.

It has been the go-to editing software for content creators of short educational videos, small movies and high-quality music videos. It supports common video formats, including MP4, AVI, MOV, H.264 and AVCHD and allows integration with your iPhone or iPad media files. Final Cut Pro organizes media into a Library, which provides the database where you can store all of the projects, clips and media files for your project.

Final Cut Pro is a heavy-duty option with fast render speeds and a streamlined UI for chronological video projects. It offers a one-time payment of $299, which may be ideal for editors not looking to shell out for a monthly or yearly subscription.

So now we come to the ultimate question: Is Adobe Premiere Pro or Final Apple Final Cut Pro better? It really comes down to your needs and personal preference.

Adobe Premiere Pro’s strength lies in its Creative Cloud integration and unbeatable support. Adobe Premiere Pro supports many video formats, such as MP4, MPG, AVCHD, MOV, FLV and AVI, and allows you to edit several videos simultaneously. Its cross-platform for both macOS and Windows gives editors more flexibility. Premiere Pro also offers you seven pre-configured workspaces while still allowing you to customize your workspace however you want. For more complex video projects with many video tracks, Premiere Pro is more equipped to handle the workload of your project and media files, regardless of slower rendering speeds or occasional crashes.

Both are high-quality software and are used professionally by industry giants. The winner comes down to your own individual choice and preference. Whether that choice is based on budget, price, plug-ins, quality, workload, performance, integration, ease of use or features, the winner is the one that fits your needs.