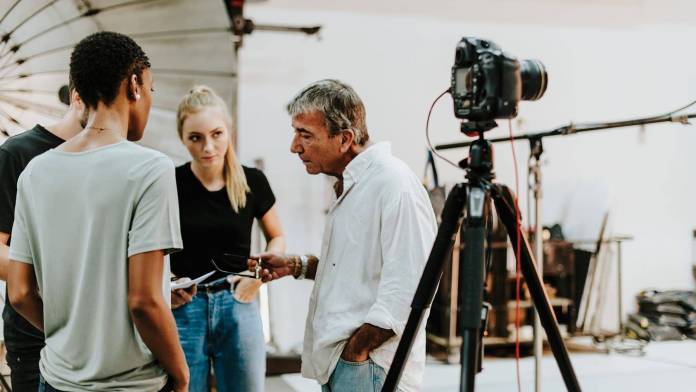 A film production often has a director of photography, art director, casting directors, and more. Each is responsible for their own individual departments. However, the captain of the ship is known simply as the director. What is a director? What exactly does the director do? Are all directors the same? This article aims to answer those questions and more, as we explore: The Role of The Director.

In the broadest sense, the director conceptualizes a creative vision and style of the project and coordinates artistic efforts to realize that vision.

Film, TV, and video are all separate beasts that fall under the umbrella of ‘moving images’. Thus, these media each require similar, but distinctly different skill sets.

In the world of narrative filmmaking, the director interprets the script and coordinates the efforts of several creative departments towards one artistic vision. As such, the director is the top level of the artistic hierarchy in cinema. They answer the all-important question: “Where does the camera go?”

This is literal, in the placement of the camera(s), but also can be taken as a metaphor for the narrative, or the way in which the story is told.

Sometimes, the director writes the script. Other times, a producer who already has the rights to the script may hire a director. At the very least, directors study the screenplay in great detail. From this, they develop a vision of the film, which they communicate to their crew, usually through department heads such as a cinematographer (or DP), production designer and costume designer.

The director also works with cast on performances. In fact, directors may also even take charge of selecting the cast. They may also be involved in post-production, working with the editor, sound designer, and composers to bring their vision to fruition.

Common paths to directing include working as a screenwriter, cinematographer or editor. Each of these roles requires an understanding of how to craft a story. Actors also frequently make the switch to working behind the camera.

An actor’s director has earned the respect and appreciation of actors. They understand the actor’s process and the needs of their actors. They are particularly adept at crafting performances for film. One main technique of an actor’s director is to avoid line readings — telling actors how to say the words: “Say it like this…”

Instead, the actor’s director focuses on helping the actor understand the exact circumstances the character is dealing with. This way, they allow the actor to find the performance their own way. For example: “Try it as if you had to work 4 hours overtime and you got a flat tire on the way home that you had to fix in the rain.”

Actor’s directors often have formally studied or have experience acting for film. They sometimes even hone their chops in live theatre.

The word ‘auteur’ often comes up when discussing directors. An auteur is a film director who exercises wide artistic control of the filmmaking process. They are involved in every step from pre-production through post-production and sometimes even distribution and marketing.

Film theorist Francois Truffaut wrote an essay in 1954 titled Une certaine tendance du cinéma français (“A certain tendency in French cinema”). The essay criticized directors who were what he called “metteur en scene”, or a ‘stager’. These directors, he said, simply put people in front of a camera and had them faithfully read the lines as written — often a faithful adaptation of a book. Moreover, they added nothing of their own, took no chances and left no mark on their work.

Truffaut argued that the directors who had flexibility over how the script was realized made better films. Thus, these directors became known as auteurs — french for ‘Author’.  This distinction was important because, under European Copyright Law, a work of art can only have one author and the author owns the copyright.

However, some film theorists and critics argue that as a collaborative medium, film does not have a single author. Instead, there is a team of people who work together to create it. They, therefore, disregard the auteur theory as flawed.

Contrary to the way it sounds, the assistant director is not next in line to be a director. The AD has a completely different role and skillset. In fact, this is not an artistic role but a managerial one. The AD devises schedules, tracks daily progress, coordinates logistics and is the director’s link to cast and crew. In fact, being an AD is not a common stepping stone on the path to becoming a director.

In the world of scripted episodic TV (both broadcast and streaming) shows, directors are often ‘gun for hire’ types, who come in to direct a few episodes but don’t stay with any show for very long. They have some say in the style of a particular episode but usually are not in charge of the overall artistic vision or tone of the series, which instead is the territory of writers. In short, the top of the artistic hierarchy is called the ‘showrunner.’ For this reason, TV is often considered to be a writer’s medium, while film is considered the director’s medium.

These directors are usually only responsible for production but have little influence on script and post-production. They are not involved with casting the show, but they do with work with actors on their performance. There are some TV shows that have long-term directors who stay with the show for many episodes, but this is less common. These directors often have a little more say in the creative tone of the show.

Directing live TV broadcasts, such as sports and news, requires different skills. The main difference is that the live TV director watches several camera feeds at once, often from a control booth, and ‘calls’ the show in real-time, cutting between cameras, asking for specific shots and adding sound cues. Like in film and TV, the live TV director coordinates a team, overseeing the placement of cameras, lights, and sound gear.  However, in Live TV, there are no reshoots and little post-production; as the edit is all done live, as well.

Live TV doesn’t often have as detailed a script as in film or narrative episodic TV, but there are loose scripts and rundowns of how the show is planned to proceed.

In the world of video, the director often wears many hats. Depending on the size of the crew, they might also produce, operate the camera and edit. They often also deal more with the technical aspects of the production — camera, sound, and lighting. However, most importantly, they are responsible for realizing the final vision of the project.

Are you ready to be a director?

The director is the most high-profile job in film production. It’s the job everyone has heard of and most people getting into production initially want to direct. Doing the job well means being an artist, a technician, a leader, and a collaborator.