The cards have evolved and will continue to evolve in a few ways — the biggest two are storage capacity and speed. Coming up with a standard in a world that’s constantly evolving has added a bit of complexity to understanding how the cards differ, while still remaining “standard”.

As cameras have increased their video resolution and framerate capabilities over the years, the SD specifications have evolved to include more space and faster write times. Since, however the cards (for the most part) remained identical in size and shape, it’s possible that you’ll put a card in a camera, turn it on, hit record and rapidly discover that the card can’t save data as quickly as your camera can produce it. This can spell disaster if you don’t have a backup plan.

Imagine that you have an orchard, and you sell oranges. In conjunction with a railroad company, you come up with a unit for selling oranges: one boxcar full. You know that it takes you a certain amount of time and labor to fill up a boxcar and you set your prices accordingly: stores order your oranges by the boxcar.

But then the next year, the railroad company comes up with a larger boxcar, twice as long as the old one–so you call this one a Boxcar-eXtended, and then later the same year, you get some mechanized equipment that enables you to load oranges four times as fast and you call this technology Boxcar-FL for “Fast Loading”, but this only works with a Fast Loading enabled boxcar, so when someone asks you how much for a shipment of oranges you have to ask: a Boxcar or a Boxcar-eXtended…and with Boxcar-FL loading or Boxcar-Original loading?

You see how complicated this can get, trying to maintain a standard while the technology is ever-evolving. But the bottom line is, you can still put oranges into any boxcar. The speed at which they get loaded and the amount of them that will fit depends on what type of boxcar and what type of loading equipment you use.

What am I looking for?

Our boxcar example is just like the world of SD cards. Here you will find: 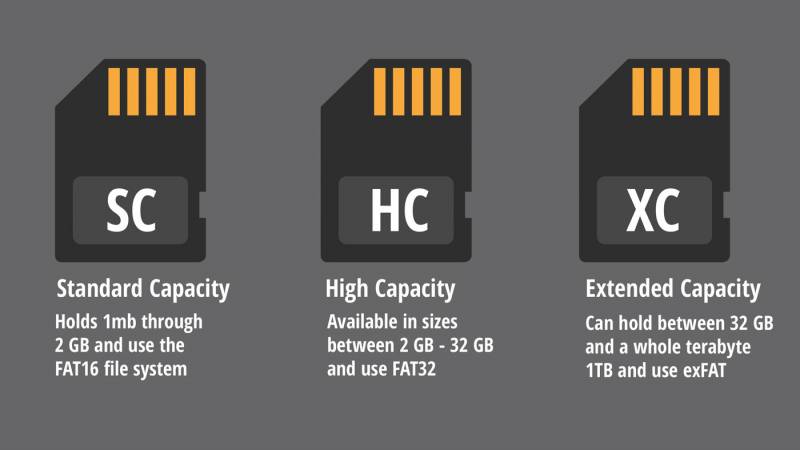 Most of the time, you’ll encounter either SDHC or SDXC cards as you’re shopping. As long as your camera or recording device — and your budget — supports a larger SDXC card, that’s probably what you’ll want to use. This will be especially important if you’re recording high-resolution video at high bitrates, meaning more file storage space will be used up per minute of video recorded.

Perhaps more important than capacity is the speed of your SD card. While capacity dictates how much data a card can hold, its speed will dictate how fast that data can be written and saved.

Perhaps more important than capacity is the speed of your SD card.

Marketers all too often paint themselves into a corner of hyperbole. Does “ultra” sound faster than “extreme”? Extreme III sounds faster than Extreme II, but is it faster than Transcend? And where does “Professional” fit in on this scale?

Luckily, all but the very first SD cards also have a numerical rating. The SD Association provides guidelines for classifying cards by speed. Designations include class 2, 4, 6, 8 and 10, denoted with the letter C with a number inside of it. These classes correspond to the minimum write speed of the card — class 2 for cards that offer a minimum 2 megabytes per second, class 4 for 4 MB/s and so on. There are also Ultra High Speed (UHS) classes 1 and 3, denoted with a U with a number inside of it on the card and writing at 10MB/s and 30MB/s respectively. The newest V class, for video speed class, offers class designations of V6, V10, V30, V60 and V90 with each corresponding to the minimum number of megabytes written per second.

You’ll also see speeds written on the various cards “8x”, “32x” etc. “X” means “times faster than an audio CD reads” — which is 150 kilobytes per second. Sometimes, manufacturers will even provide the maximum speed of the card in megabytes per second. Weird, I know.

To make things more confusing, the classes and ratings can often be found on the same card, since there is some overlap.

Why doesn’t this card work?

If a card isn’t working, check the requirements on your device. Your camera may not be able to take cards over a certain capacity. Your camera will also have a maximum speed that it can write at, so getting a card faster than that would be useless. At the same time, the resolution or frame rate you wish to use for your recording may require a faster card. Shooting 4K video on a class 10 card, for instance, may result in file corruption or a failure to record all together. Your camera may also, for some arcane reason, not work well with some brands of SD cards.

Be sure to test your cards in your camera before any shoot. While trying to do a quick reshoot once with two actors I packed light, hoping to be done very quickly with a minimum of fuss. 20 seconds into shooting my camera buffer filled up because it wasn’t able to write to the card fast enough. Thankfully what I needed to reshoot was very short and I was able to do it in 20 second segments, but it underscored something that should have already been second nature.