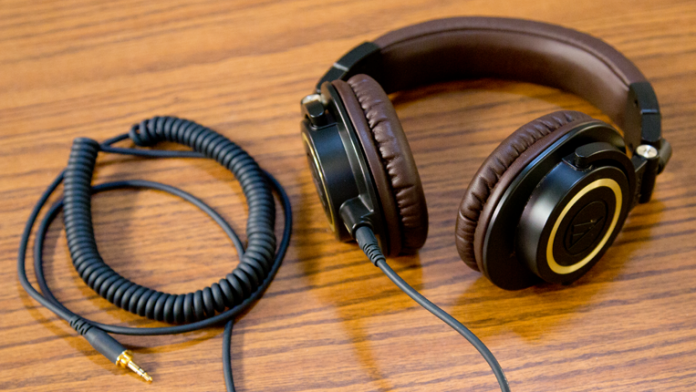 Any professional video producer knows that high-quality audio is just as important as great looking footage. Many editors tend to lean toward near field monitors for editing because of their accurate audio and wide frequency range. When in the field, quality audio monitoring is just as important as back in the studio. The Audio-Technica ATH-M50x are designed and marketed as professional monitor headphones, and coming from Audio-Technica, you can bet that they will perform with a high level of quality.

The headphones are constructed using plastic components, but feel pretty sturdy. We would have liked to see more metal components used in the build. Leather is also used in the design, and covers the headband and earcups. All the leather pieces are extremely soft and comfortable. Those who have the M50 will notice one of the biggest upgrades to the M50x is the earcups. Considering these headphones are a closed-back design, there is minimal heat build up. While testing, not once did we experience sweating around the ears, even after hours of use. The earcups themselves are very luxurious. In addition, the gentle clamping pressure of the headset means listeners will not experience discomfort around the ears. Wherever you search, or whatever you read, everyone is raving about the comfortability of this pair of headphones. We aren’t the biggest fans of the 90° swiveling earcups, but they can be useful in situations where you may need one-ear monitoring. We felt as if there was no suitable way to wear the headphones while one of the earcups was swiveled. One big advantage we discovered, is the ability to use this pair of headphones for your field monitoring as well as for editing back in the studio — eliminating the need to have both studio monitors for your edit suite and a pair of headphones to monitor audio while on shoots.


One big advantage we discovered, is the ability to use this pair of headphones for your field monitoring as well as for editing back in the studio — eliminating the need to have both studio monitors for your edit suite and a pair of headphones to monitor audio while on shoots.

Arguably, the other major upgrade from the M50 is the M50x’s detachable and interchangeable cables. We learned about this feature in a real life scenario where the headphone’s cord was being stepped on while the user began to stand. Normally, this would rip the headphones off the user’s head, jerking their head and sending the headphones crashing down; however, the detachable cable on the M50x simply unplugged — no harm, no foul. You wouldn’t think something as simple as detachable cables will make a big difference, but soon you will be thanking Audio-Technica for this very user-friendly upgrade.

Now onto more practical applications. We found the M50x very useful while correcting and touching up voice-overs. The considerable sound isolation provided by the M50x’s closed back design, means you can block out considerable extraneous and ambient sound. We placed a fan in the room on the highest setting, and while listening to the audio, we could no longer hear the fan. Keep in mind, the sound isolation is not strong enough to block out ambient sound itself when no audio is being played. Enough ambient noise will be blocked while listening to the point where the ambient noise has no effect on your listening. This is especially helpful while trying to effectively reduce hum or hiss on a stand up or voice over. The sound isolation also proves useful while in the field, keeping subtle extraneous sounds from distracting your sound person and preventing accurate assessment of the quality of a take.

To truly test the quality of audio, we also had to listen to some music. We tried a variety of genres from hip-hop to techno, country, reggae and even audio books and spoken word. The M50x have a well pronounced and aggressive sound with exceptional clarity. The bass does not dominate, but is still perceivable and quite punchy.

It is a breath of fresh air to know that the bass does not overstep its boundaries or mask the delicateness of the high and mid-tones. Some headphones out on the market right now exhibit significant levels of coloration to the bass, creating an unbalanced sound. This is not what monitor headphones are designed for. Their job is to create an accurate sound reproduction of the recorded audio.

The mid-range on the M50x is relatively flat and accurate, which is highly sought after in studio monitors. You can easily differentiate from the highs and lows. Some other headphones tend to have sharper treble, leading to listening fatigue quickly — for example, the default earbuds that come with an iPod. The treble from the M50x is very clean and articulate without introducing the harshness that usually accompanies treble, especially at high volume levels. Plenty of headphones create an ear-piercing sound at higher volumes; however, the M50x creates a melodic tone that’s easy on the ears.

The Audio-Technica ATH-M50x meets all of our demands. It’s audio is unquestionably accurate, the comfort level is outstanding and the M50x can be used for field monitoring and studio monitoring. Conveniently portable, you might even find yourself using the M50x for all your monitoring needs. For under $200, the M50x blows away the competition.