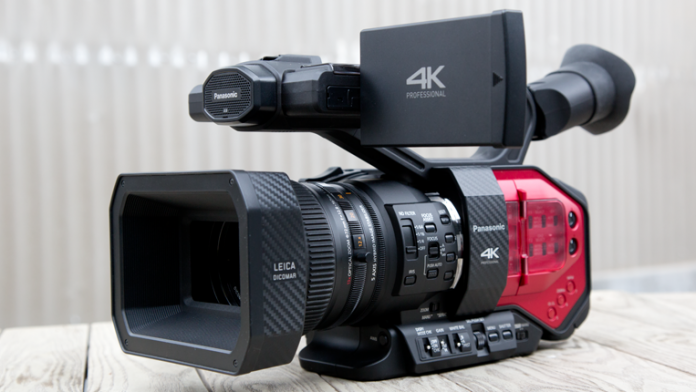 When form and function meet up, you know you really have a winner. The Panasonic AG-DVX200 has stunning looks, and we’ve set off to find out if it’s as pretty on the inside as it is on the outside.

The story goes like this: Up to now, fixed-lens camcorders have been falling behind in the ever increasing and competitive camera market, but now, with the DVX200, Panasonic put out their first ever camcorder with a 4/3 image sensor. For context, that’s about double the size of a 2/3-inch image sensor typically found in camcorders within the same category. Because of its larger sensor, we’d love to say that the DVX200 is a DSLR/MILC killer, but it’s not. However, that doesn’t mean that it lacks in image quality, resolution or form factor. Panasonic has stepped up their game with this one. Run-and-gun shooters now have a camera that can give them the form factor they require, but also offers some pretty impressive shallow depth of field for a fixed-lens camera.

We got our first glimpse of this absolutely beautiful camera at NAB 2015. With its carbon fiber texture and flashy red paint job, it sure is a looker. We couldn’t help but notice its resemblance to the camera Marty McFly uses in “Back to the Future” — a JVC, by the way. Its stunning good looks can’t be missed. If a flashy-looking camera is your game, then this camera is for you.

Other than its striking appearance, you’ll first notice that it’s got a nice weight to it. That’s not to say that it’s heavy, but it’s robustly built with a smart layout. Coming in at just over 6lbs, it’s not going to require any significant support or muscles to operate. If you’re already a Panasonic user, the muscle memory you already have will be in great use with the DVX200 as it’s laid out in a very similar way.

A nice feature of this camera is the covers for the side and rear terminals. When the covers are down, they feel almost nonexistent, but they’re stout enough to not have to worry that they’ll break off. This is key for the life of the camera. The covers need to be there to keep out dust and dirt from the connection points, but many times manufactures short change the quality of their covers. They either don’t last long, they get in the way or both. That’s not the case with the DVX200. The build quality of this camera is very good. It’s robust enough that it’s up to taking heavy use and abuse. We expect there will be a long life in store for the DVX200.

We hoped that there would be professional output options, and there are! Panasonic provides both HDMI and 3G-SDI outputs. There are also 2 XLR inputs with easy and usable audio gain controls. The gain controls and input assignment switches are behind a cover, which feels solid and has a nice window allowing you to see the options without needing to open the door. You can also assign any input to either channel one, channel two or both. This is helpful when you need two different gain levels of the same input. Doing this will allow for a channel at have 2 inputs, one with a healthy level and one at an input level, just in case the sound source is too dynamic and has the possibility of clipping the signal.

All recording is done on SD cards — a huge improvement over past cameras that recorded on specialized media like P2 cards that are far more expensive, not to mention proprietary to Panasonic cameras. It’s recommended that you have a class 10 UHS speed class 3 compatible SD card for proper capture to the card. Remember, if you try to record on a card that can’t keep up with the data record rate, you’ll be left with footage you can’t use because it’s jittery or worse — it failed to write. Do yourself a favor whenever buying a new camera: Leave some budget for some new media. This will ensure proper capture but also improve your capture capacity.

Another notable feature is its dual card slot. This will allow for longer record times or, if desired, you can dual record a 4K clip on one card and an HD clip on to the other, giving you instant proxies.

A welcome bonus is that, when recording on an external recorder, the DVX200 will output 10-bit over the 8-bit captured with the camera alone.

The LCD screen hides neatly away when not in use. It’s a large screen and looks great. Our biggest hangup on the LCD is that, when outside in the bright sun, the amount of glare on the screen made it difficult to view what we were capturing. To overcome the glare, you must tilt the screen, but in some situations, this isn’t ideal for the shooter. On the positive side, the screen is touch sensitive, allowing for touch focus. It’s recommended that in high glare situations the shooter should use the EVF, which is a high-resolution OLED and offers great color reproduction.

Shooting handheld with the DVX200 in nearly any situation will result in very stable footage — the image stabilization works wonders.

We were impressed with the image quality; it looked superb. The larger sensor made it much easier to achieve shallow depth of field than most fixed-lens cameras, but it’s still deep enough for on-the-go shooters to not have to worry about trying hard to keep focus when that’s needed. When it comes to low-light capabilities, the amount of noise the DVX200 has is minimal when shooting above -12 db. However our tests showed that when cranked to -20db and -24db, the noise was far more noticeable.

The Leica Dicomar 4K lens has a focal length equivalent of 29.5mm to 384.9mm. This should cover just about every focal length you might need. It’s not terribly wide, but it’s not unusable either. It’s quite fast on the wide end, offering an f-stop of 2.8, and on the telephoto side, a maximum aperture of f/4.5.

While shooting, we tested the V-Log picture profile and were quite impressed with the flexibility it offered in post. Panasonic claims 12 stops of dynamic range, and we’d concur. V-log is a great option and depending on your workflow, might be the mode to use as a default if your production allows for any color grading. Better yet, combine it with a field monitor like the Small HD 502 where you can preview in real time with a LUT applied. If your workflow does not already allow for grading, this might be added work that doesn’t benefit your bottom line.

The DVX200 has a few assist options that will take your shots to the next level, boasting both a waveform monitor and vectorscope along with focus peaking. Use these tools correctly and it will make getting the correct exposure and focus easy. Pair those with zebras and the run-and-gun shooter has the tools they need right at their fingertips. We found these were easy to read and a great feature for every shooter. We’d love to see all these options standard on every video camera.

The focus assist is even more important on this camera because of the larger sensor. Because of the high resolution and ability to get some shallow DOF, having perfect focus will be key to a shot that turns out well. As well, when shooting in V-Log, it can be hard to visually know when you are in correct exposure, so use of the assist tools is a necessity.

The last assist we’d like to mention is the eye sensor; it senses when your eye is near the EVF and turns off your LCD screen. This is a great for saving power, however it can be very frustrating if you don’t use the EVF much. We have encountered this on other cameras like the Sony a7R II, and just like with it, the DVX200 disabled either the EVF or LCD. The only downside to this is when you find yourself in a situation when you want to use the viewer that isn’t your primary, you’ll need to go into menu and turn it on. This feature has been dubbed #shotkiller by customer reviews on the Internet. We wouldn’t go that far, because it’s simply and easily turned off, but if you switch between the two viewers and don’t want to deal with the eye sensor, this could be an issue.

The Panasonic AG-DVX200 isn’t for everyone. Like with any tool, it has a specific job it does well, but it won’t be suited for every shooting environment. If you’re a run-and-gun shooter, someone that does documentary shooting on the go or a news shooter, this camera is for you. It has enough shallow depth of field that it feels more cinematic, but not so much that it will be a big problem keeping focus when on the go. To boot, the assist tools will make keeping exposure and focus more manageable. The affordable media, rugged build quality and resolution options makes this camera very flexible for those that need to get it right and get it now.

If you’re a shooter who wants a more cinematic look and has the time to set up and run the shot through a few times, this camera might be too basic for you. Although it gets shallower depth of field than other fixed lens cameras, it really doesn’t hold a candle to a larger sensor camera with interchangeable lenses. As well, if the form factor doesn’t fit your type or style of shooting, then the ergonomics of this camera might not be important to you. We’d recommend a camera with a Super 35 image sensor or larger that shoots 4K and will fit your budget. For the money, the Sony a7S II is great for video-centered shooters and the a7R II for photo-centered shooters. Lastly, if you like the picture quality of the DVX200, but don’t require the form factor, the Panasonic GH4 would work out great for a fraction of the price.

The DVX200 is one fantastic camera. From the start, we loved its look and picture quality. The AG-DVX200 isn’t for everyone, but no camera is. Coming in at around $4,700, it’s a great value and looks tough enough to live a long life. We had a good time shooting with it. It’s form-factor lent itself to easy shooting, and with V-Log, it gets great dynamic range. We were surprised at its low-light capabilities and that shallow depth of field is possible with a camcorder. We can only sum it up with these simple words: The DVX200’s picture is as pretty as the camera itself.