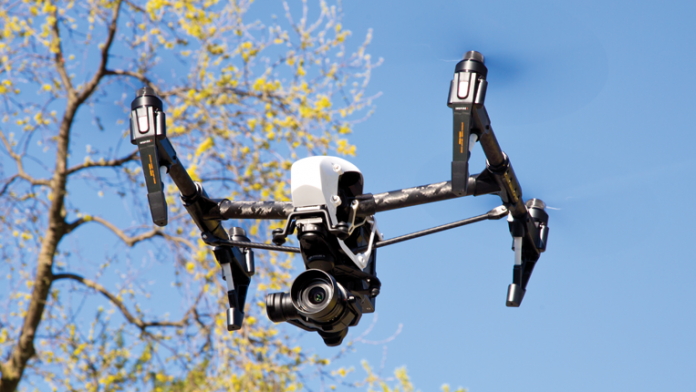 Some people believe the only difference between an Inspire 1 and the DJI Inspire 1 Pro is the camera — not true. First, the propellers mount in a completely new way. No longer are you screwing propellers on and off. Also, if a blade strikes something and you need to replace it, the old way of mounting would cinch down the prop making it difficult to remove or even strip out the threads. The new blades have a simple quarter-turn quick release mechanism. No more cross-threads, no more hard-to-remove props — a very cool innovation indeed.

Some of the specialized flight modes are not available on the regular Inspire 1, including the new Follow Me mode. We found this most curious. The thought of a professional relying on autonomous flight for a smooth shot in a production environment kind of reminded us of when Final Cut X first came out. Remember all those automatic features that professionals winced at? We kept our minds open and tried it out.

The thought of a professional relying on autonomous flight for a smooth shot in a production environment kind of reminded us of when Final Cut X first came out.


Follow Me would be nice if you’re making a home movie of your water-ski exploits, or taking a motorcycle ride through the desert, but it’s certainly not a pro feature. The gimbal does not track the GPS tracker, which in this case is your cell phone attached to the remote. As a result, the Inspire is constantly fighting Newton’s laws to keep following an object. Even on foot, we managed to leave the frame of a wide angle view. The tracking was also very jerky. The footage would be deemed by any professional as newbie footage at best. Finally, there is no separate tracker. You must take the whole remote transmitter and cell phone with you as a tracker. This could lead to all sorts of mishaps.

We could go on for days about Follow Me, but the bottom line is that it and the other special modes are certainly aimed at consumers and beginners.

The Zenmuse X5 camera is a mixed bag. The actual camera and glass are fantastic, especially for 60 Mbps recording, but there is a problem with that data rate. It’s not considered broadcast quality. For instance, Discovery networks requires at least 145 Mbps as their standard. It’s also only 10 Mbps better than the X3 data rate on the regular Inspire 1, or a GoPro HERO4 on a Phantom 2. The only advantage is the removable lens. But therein a problem lies as well.

The X5 is fixed to the gimbal, so it cannot be removed and remain functional.  Therefore, balance is required. To maintain balance, the camera only supports 8 lenses total. That’s right. Out of all of the Micro Four Thirds lenses available to you, only 8 are supported by this camera. Two of those lenses require balancing weights — sold separately. It’s also unclear as to which of these lenses affect the flight times and characteristics of the Inspire 1 Pro. After all, more weight means shorter battery life.

If the bit-rate were higher, this may be a reasonable compromise. But wait, there is a new version coming out soon — the X5 RAW. That’s right, there is a RAW version planned, which will record at 1.7 – 2.4 Gbps. It’s going to be interesting to see how DJI manages to fit that data rate onto an internal memory card where the fastest we’ve seen is 510 MB/s CFast cards; quite a bit heavier than a microSD. It’s going to be revolutionary for sure, and we can’t wait to see it! On the down side, the lens choices with the X5 RAW will be reduced to only 4 lenses.

Compare this camera to the current leading professional aerial rig by DJI: the S900 paired with a Panasonic GH4. Yes, the GH4 is limited to using only one lens in flight, but the data rate is 200 Mbps — more than satisfactory for broadcast and even used on visually stunning films such as “A Walk in the Woods” (2015) starring Robert Redford and Nick Nolte. We just don’t see the Inspire 1 Pro replacing the S900 for professional production work, at least not until the RAW version comes out.

Furthermore, with this setup, on the ground you still have a GH4. There you can use any Micro Four Thirds lens you like with it. With an adapter, you can use any EF lens you like with it. And the price points? A GH4 is $1,500 while the X5 is $2,300. And to use the X5 on the ground, you’d still need an OSMO — an additional $800. The X5 just doesn’t seem to be worth it.

All that said, the X5 is truly groundbreaking — really, it is. The X5 isn’t just a step in the right direction, it’s a quantum leap in the right direction. It’s a very exciting first attempt. We just find it a bit strange that it’s in production. The real camera to look out for is the RAW version, the X5R. That camera will not only set the industry on its ear but will cause all of us in production to rethink our own perceptions of production value based on the appearance of the camera.

That very concept of perceived value is why we find the X5 so strange. With a bit rate barely better than a GoPro, as we see it, the big advantage to the X5 over the X3 is the removable lenses. But the limited pool screams gimmick in this context. It certainly seems like a transition to the X5R.

The most common complaint is the that the gimbal does not pan, or yaw, freely. The total travel of the X5’s gimbal is about 630 degrees. Sounds impressive on the surface, but it’s really not. From pointing straight-forward, it cannot rotate a full 360 degrees in either direction; rather, it’s around 315 degrees.  Even 360 would be limiting.

On the good side, the vibration dampeners were very successful, and the movement on the gimbal was very smooth.

The drone itself flies like a dream. The problem with the bigger drones like the S900 is that they use controls designed for RC pilots. The controls on the latest DJI drones are designed for aerial cinematographers. They’re intuitive, well located and work exactly how you would expect them to. I’ve gone to many DJI events and conventions and my question is always the same, “Why don’t you just sell these controllers for other systems?” To date, they’ve never answered, just smiled and chuckled — understandable for sure.

The flight characteristics of the drone are extremely impressive. It stops on a dime, navigates extremely narrow gaps like a champion and holds hovers all by itself as if it were mounted on a pole. In one instance, we filmed a truck pulling into a garage at a normal pace. The squeeze between the windshield and the front of the garage when hopping over the truck was literally less than 3 inches of play in either direction. We were sure, based on our experience, that we were going to hit the windshield. The Inspire 1 Pro was so nimble that it easily cleared the gap without incident. A deep breath was let out across the set. Color us impressed. Really, this is not a shot we would have attempted with the S900. However, we’ve done it several times with a Phantom.

This author has been building and flying drones for over 12 years. I still remember ripping accelerometers out of Nintendo Wii-motes to build DIY guidance systems. Along came DJI and changed the entire drone game. Other guidance systems and drones were very unreliable, shaky and quite scary — I have many scars. I still remember getting my first DJI guidance system — the Wookong-m v1 — and bragging on the RC group forums about my ridiculously expensive purchase. DJI has always screamed quality. When DJI comes out with a product, you can believe in it.

The expectation for excellence can be tough to live up to. If you really put the Inspire 1 Pro into context, it’s an outlier in the DJI lineup. DJI has never really come out with a stepping stone product, but that’s really what the Inspire 1 Pro seems to be. The product that will be best suited for the DJI name will be the Inspire 1 Pro RAW.

In the interest of full-disclosure, I have been accused of being a DJI fan-boy. I have friends that work at DJI, and DJI are partners and friends in several organizations I work with. Every friend makes errors, and true friends call them on their errors. Is the Inspire 1 Pro an error by DJI? No, but it is an inconsistency. It’s still a great drone. It’s just not that much better than the original Inspire 1. It’s certainly not nearly double-the-cost better.

I was actually in the process of selling my DJI S900 and preparing to buy an Inspire 1 Pro. I’m very glad I had not sold it yet. I’ll be keeping my S900. That being said, the Inspire 1 Pro does take beautiful imagery. I’ll invest in the RAW version once it’s out.  However, the Inspire 1 Pro is a product that seems to be obsolete before it even hit the market with DJI announcing the RAW at the same time the X5 was released. In our opinion, the “pro” in Inspire 1 Pro seems to stand for Prosumer and not Professional. We eagerly wait with bated breath for the RAW version.

Ty Audronis is an Aerial Cinematographer with over 12 years of experience in building and flying professionally. He sits on the advisory committee for the Society of Aerial Cinematography, has spoken at various conventions and events, and wrote the currently highest rated book on the subject.