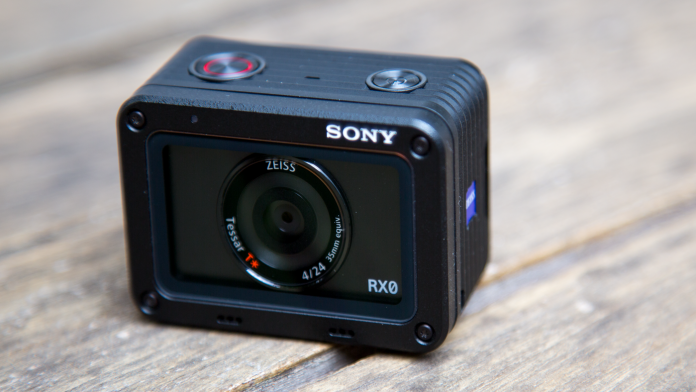 At first glance, the RX0 looks like Sony’s version of the GoPro. It’s waterproof, small and shock resistant. However, Sony says its not designed to be in the Action Camera marketplace; Sony already has one of those, the FDR-X3000. With a one inch stacked CMOS sensor, the RX0 can record up to 1080 HD internally, but with an external device can capture 4K. That makes it unique and quite different than other cameras on the market.

With a one inch stacked CMOS sensor, the RX0 can record up to 1080 HD internally, but with an external device, it can capture 4K.

Sony offers internal 4K in all of its cameras, so why’s it missing from the RX0? The RX0 is meant to be a different kind of camera, but with some familiar features and options. The RX0 is part of the RX series cameras, which include the RX100 V, the RX10 IV and the RX1. The RX0 has the same sensor as the other cameras in the RX line. It shares High Frame Rate (HFR) mode, allowing for recording in 240 frames per second (fps) 480 fps and 960 fps. The camera can also shoot in S-Log 2 gamma and be remotely controlled via an iOS or Android device.

The RX0 has a 24mm f/4 lens. It records 1080, 60 fps video internally with the ability to capture 4:2:2 UHD 4K via its HDMI out. It offers Timecode-Sync for multiple camera control. It’s waterproof down to 33 feet, shock resistant from 6 feet and crushproof under weights up to 440 foot-pound force. With its 21 MegaPixel sensor it is capable of recording in XAVC-S, AVCHD and MP4.

We first got a look at the RX0 during the release event for its sister camera, the RX10 IV, in New York City. In stark contrast with the RX10 IV form factor, the RX0 is tiny. The RX10 IV has an insane zoom length and the RX0 has a fixed focal length. Sony had a few RX0’s on display, some single cameras and also a few different camera arrays to show off that RX0 is more than just a tiny camera with a big sensor. The three distinct set-ups on display showed a nine camera array panel, a 360 rig with multiple cameras and bullet camera set-up. The strength of the RX0 in these set-ups showed — it’s able to be apart of an array of cameras. If you have ever shot multiple cameras that you need to stitch together or sync, you know this is a big deal. The RX0 allows for control of one or many cameras at once. All of the camera’s can be remotely started and synced together. Using Sony’s mobile app you can control up to five cameras at once and with the addition of a FA-WRC1M wireless radio commander, you are able to control up to 15 cameras simultaneously.

Holding the camera in your hands, it’s pretty light. We compared it by hand to the GoPro HERO6 Black, and we couldn't distinguish a weight difference. So we pulled out our handy scale and weighed them. The GoPro is 3.4 ounces (oz) and the Sony is 4.1 oz. The outside housing of the RX0 is stout. It even has a mic input. We connected an Atomos Shogun Inferno to the RX0 to capture 4K 4:2:2 out the RX0 HDMI port. Navigating the menu is a bit cumbersome, but we quickly found the setting to enable external 4K recording. We like this feature though wonder how likely it would be that this would be done with this camera. A nice party trick to say it has 4K capabilities but the camera is so small, having an external recorder with it challenges its ability to be small and portable — or waterproof.

We took the RX0 in to our studio to do some controlled tests for rolling shutter, low light performance and battery life. Starting with its low light performance, we set the camera up shooting at a DSC reference chart. We started at ISO 125, the lowest ISO, then set the shutter speed till we gained proper exposure. We then doubled the ISO and shutter speed to counteract each other to determine at what ISO is noise introduced into the picture. At ISO 1000 we started seeing noise and at ISO 2000 it required noise reduction. With Red Giant Denoiser III noise reduction, we were able to shoot up to ISO 3200, above that and the noise is too much to be corrected for professional use.

Moving on to the rolling shutter effect on this camera, like the other RX models, it’s almost non-existent. It is a rolling shutter camera, so it will have some effects, but it's very minor. Our last test is battery life. During this test we experienced a problem we have seen many times with Sony cameras; overheating. After 36 minutes in a climate controlled 75 degree room, out of direct sunlight while recording 1080 at 24 fps in XAVC-S at 50mbps, the camera overheated. In this situation, Sony has created an option to disable the failsafe protecting the camera when overheating called Auto Power Off Temp. When turning from standard to High in this setting we received the warning “The surface of the device may get hot to prioritize recording time. Do not shoot while holding the device in your hand. Use a tripod.” In cases where doing harm to your camera is ok to get the shot, this is a life saver. In cases where you can’t handle the risk, leave it on standard. Alternatively, the RX0 can be powered without the battery, helping any overheating issues, but any potential buyer should be aware. We’d rather a camera that just doesn’t overheat; this isn't a major issue for any other brand.

Like we said before, the RX0 is a new type of camera, so there isn’t a rival. Because of this, we’re going to have to stick to comparing it to action cameras. Let’s look at the Sony FDR-X3000 and the GoPro HERO6 Black.

Next is the GoPro HERO6 Black for 500 dollars. A newer release than the FDR-X3000, offers 4K 60 fps and 240 fps in 1080. It can capture 12 megapixel photos at 30 fps and needs no underwater housing. For 200 dollars you get lots of features that the RX0 doesn't offer, but the GoPro has a smaller sensor and only shoots up to 240 fps. However it can shoot 4K internally.

Lets Wrap It Up

For 700 dollars, the RX0 is a hard choice when compared to other action cameras. The big deal about this camera is the large sensor, HFR mode and ability to be used in an array synced with other RX0s. The image quality looks good, and the camera could be a great fit for some applications. Whether or not this camera is for you will depend on if it’s special qualifications benefit your application.

The Sony RX0 is small like an action camera with a one inch CMOS sensor. It offers good low light performance and HFR shooting, but costs 700 dollars.