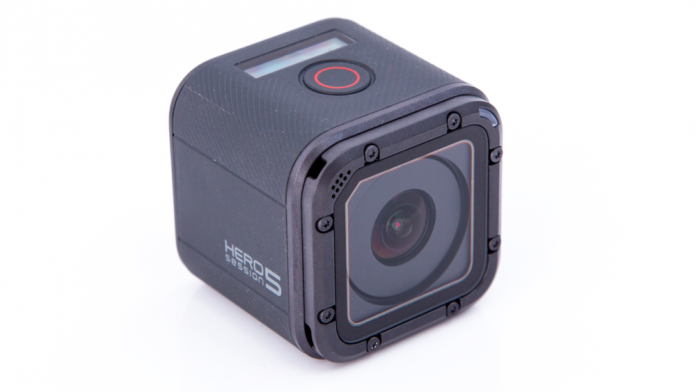 From Squaw Valley Tahoe, they announced the HERO5 Black, Session and their first drone, Karma.

The launch came with a few surprises, the first being the announcement of the new HERO5 Session. GoPro’s last camera was the HERO4 Session and from our experience, it was initially a bit of a dud. The HERO4 Session was announced on July 6, 2015. After our review, we concluded that because it didn’t have 4K, the picture quality wasn’t on par with the other camera they offered at the same price point, the HERO4 Silver, and accessing and changing any menu items required their app. It appears that GoPro learned from that launch and gave us what we wanted when HERO4 Session was released in the HERO5 Session.

What can the HERO5 Black do that the Session can't?

While many options and features are shared with the HERO5 Black, the Session isn’t just a smaller version of the Black; there are also some features held back. Let’s start off with the specs that are different. The HERO5 Session lacks a few of the frame rate options that the Black offers, notably 24p when shooting UHD 4K. The Session only has 30p as an option when shooting 4K as opposed to 24p and 30p with the Black. As well, the Session does not offer the higher frame rates like 240 fps that the Black does. A huge missing feature from the Session is the ability to remove the battery. Because the battery life is only 40-43 minutes when shooting 4K 30p, an extra battery is a must, but that isn’t an option.

We got to play with both of the new HERO5s the day of the launch. GoPro was nice enough to include us in the launch event, so we got our hands on the Session first outside of beta testers. We shot a bunch that day at Lake Tahoe. We mounted it upside down — it self-corrects when not upright — on the seat of a electric mountain bike. We even mounted it on an RC 4×4 truck to test the image stabilization. The image stabilization worked alright; however, it’s digital image stabilization, so it can add some jello to the corners of your shot and it doesn’t work in 4K.

The ruggedness of this camera is fantastic. It’s easy to just throw in your bag and have it around, just in case. However, it didn’t do great in all of our tests. The low light capabilities of the HERO5 Session aren’t great. Unless you have the sun as your light source, you'll be battling a lot of noise in your shot.

It’s easy to just throw in your bag and have it around, just in case.

We took the HERO5 Session with us to New York City, choosing to test out the timelapse mode and how usable the whole camera is when it’s your only camera. In this capacity the Session falls flat. Because you need your phone to frame your shot, set exposure and change settings, we used a lot of battery up on our phone. Add that to the short battery life and you could find yourself disconnected from the world because your phone died — that’s why we bring extra charging battery packs with us.

When shooting in moderately lit room, the noise was not acceptable. The Session wants to live outside. It requires the sun to have a good looking picture. We were disappointed with the limited field of view for higher resolution shots in both of the HERO5 cameras. It would be nice to be able to have the medium, narrow or linear FOV option when shooting in 4K. The wide shots scream Action Cam, and the distortion is significant.
When testing the rolling shutter, we happily found very little jello effect, similar to the HERO5 Black. The underwater performance was good. It was clear, and because the mics are self-clearing, seconds after pulling it from the water, the audio was good to go.

There are two mics on the Session versus the three on the Black. GoPro explained that it was because the Black is a rectangle and required three mics to get the same wind reduction. Wind reduction worked alright in light wind, however, when we mounted the Session to a car, there was little to no difference with wind reduction on or off. When using wind reduction, the audio being recorded is mono; if a stereo recording is required, wind reduction is not offered.

The voice commands are super fun. It’s nice to not to have to use your hands to change shooting modes, to turn the camera off or to tell it to stop or start recording. Overall, it was the best new feature and is quite enjoyable to use. The only downside is that there are very specific commands you need to give to get it to work, so memorize them. We would have like to be able to make a few custom commands, because, why not?

The HERO 5 Black is $399, the HERO5 Session is $299, and GoPro is still selling the HERO4 Session at $199. The HERO4 Session is now the right price, and worth $200, but we would recommend spending the extra $100 on the HERO5 Session if you can. However, overall we would rather have a HERO5 Black for video production purposes because of the added frame rates, rear screen and battery life. The best deal will be the HERO4 Black. Now discontinued, there are still some out there for sale. Until they're gone, the HERO4 Black will be the best value as it offers all the frame rate and resolution options the HERO5 offers for less money, and when we put it up against the HERO5 Black and Session, the image quality was indistinguishable — you’ll just have to deal with no rear screen.

The resolution offerings are finally on par with the market’s expectation, and the picture quality is far better than its little brother, the HERO4 Session. We would like more menu control on the Session and a replaceable battery, but overall found it to be a solid camera.

Chris Monlux finds more pleasure using an action camera than he once did. He is also Videomaker’s Multimedia Editor.