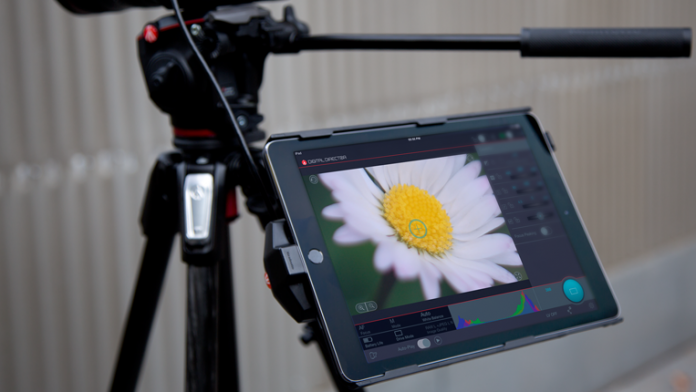 The device, made out of lightweight plastic, weighs in at about a pound, is roughly the size of a piece of paper and is a little over three inches thick. The battery housing along the bottom provides a good handhold for the device and anchors a standard 3/8’’ mount. The Digital Director takes four AA batteries, which serve to power the device. The Digital Direct also include an AC power supply, which will charge the iPad when in use. The iPad slips snugly into the top and is secured by a simple-to-use latch that is hidden from sight when locked, providing an easy way to see the iPad is safe and secure from a distance.

The Digital Director is for the budget minded videographer or photographer looking to get more bang for their buck and more use out of their equipment. Mid-level field monitors can cost up to $1,000 but the Digital Director including an iPad costs only about $800 plus tax with each device costing around $400. If you already own an iPad Air or iPad Air 2, that brings to cost down to just $399, making it an excellent price for a field monitor solution.

Most mid-level field monitors house screens at around 6 to 8 inches but the Digital Director, using the iPad screen, extends up to 9.7 inches with a resolution of 2048 x 1536 and 264 pixels per inch, giving the user a larger screen for viewing what's being shot versus most traditional monitors. The iPad’s specs and the Digital Director App are comparable to mid-level dedicated field monitors, too, featuring focus assist, magnification and integrated IPS (In-Plane Switching) technology which results in a higher contrast ratio and better, more accurate overall color and better image quality.

The Digital Director, which includes its own dedicated ARM® Cortex®-A8 CPU, interfaces with the iPad through Manfrotto’s dedicated app, aptly named Digital Director. In app, the Digital Director offers a plethora of readings and controls including a histogram, zebra stripes, audio levels, exposure, ISO, shutter release/speed, aperture, manual focus, white balance, image quality and access to focus/camera/drive modes. Unfortunately FTP uploads from the Director at the moment are only for photographs and not video footage. If you’re a video producer who likes to share photos however, the Digital Director automatically saves a JPEG file to the iPad every time a picture is taken and if within Wi-Fi range, can be uploaded directly to an FTP site from the device.

Taking the Director in the field, it worked great as a field monitor. It connected instantly to our Canon 7D Mark II and quickly displayed a live feed coming from the camera. No update was needed for us, but some users online have reported issues that could be fixed with a quick firmware update. The feed was smooth, stable and very high quality and showed no visible lag.

When paired with a Manfrotto tripod, the device secures very neatly next to the camera mount with the convenient anti-rotation ‘Friction Arms’ that are included and keep the iPad facing in any direction necessary.

The on-screen histogram and readouts of various setting were very useful given the iPad’s 9.7 inch screen provided enough room for Live Feed and setting controls and readouts with none of them looking over-crowded. The audio levels alone are enough to make a video producer jump. Many people hack their Canon’s using Magic Lantern for audio levels and other features but the hacking process can sometimes be dangerous for cameras still in the Magic Lantern’s beta phase. The fact that audio levels come standard with the Digital Director is a big plus. The point and focus feature was one of the more interesting aspects of the Digital Director, promising an interesting opportunity to do some creative focal work. However, after only several pokes at the iPad the app unfortunately stopped responding to focal cues.

The fact that audio levels come standard with the Digital Director is a big plus.

Taking pictures and starting recording faced the same issues, losing responsiveness at regular intervals. After thirty seconds or a restart of the camera, the app started accepting focal cues and shutter commands again, but even short non-responsive periods were disappointing. This complaint echoed in some user reviews online as well. Losing responsiveness to focus and shutter release poses some big problems, potentially losing some priceless shots or footage in the field. These two shortcomings were the only problems we could find with the device and app, but fortunately Manfrotto has reported additional video features and bug fixes for version 2.0 of the app.

Overall, we have high hopes for the Digital Director. Being able to buy not only a high resolution monitor but also an iPad at the same time could be a big bonus for any camera operator hoping to stretch a dollar. iPad’s can be great for production, giving video makers a place to house shot lists, budgets and scripts as well as a device for other helpful apps for things like color correction, LUTs or script helpers like Celtx. The few bugs still in the software could potentially be worked out in the future as Manfrotto hinted at and having to reach over to the camera to capture photogenic moments or start recording is still an easy workaround for times when the App chooses to freeze. Overall the Digital Director is a very useful device with a potentially bright future.

Although the Digital Director works great in the field, a few bugs in the software keep it from living up to its current potential.

Update: The price of the Manfrotto Digital Director has dropped to $299.99 since this review was published.