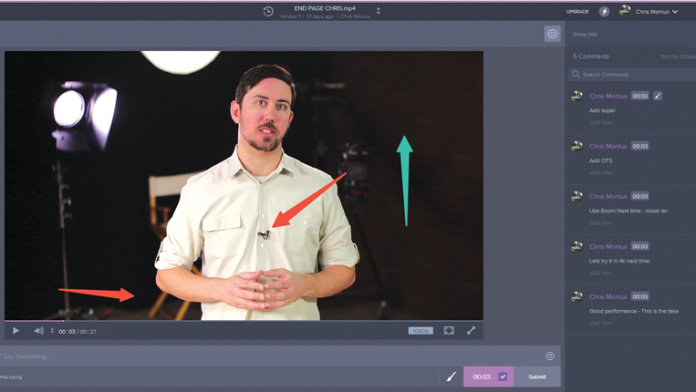 Frame.io is a media collaboration platform where you can share a workspace, upload and play back footage, comment on footage and can even use their paint brush tool to draw your thoughts on the screen. It gives you version control with version stacking that allows you to watch, side by side, different versions of edits, even toggling between their audio.

Getting started was easy; all it requires is your email address and you’re in. Most functions for Frame.io are done with your Internet browser, with the exception of its Final Cut Pro X integration, which requires an app to be installed. After getting signed up, you can add team members and collaborators to your project. A team member is someone that shares the same projects as you, where as a collaborator is someone that is a part of an individual project and only that project.

Frame.io has monthly plans ranging from a cost of $150 a month for its highest tier, business, which includes 400GB of storage, unlimited collaborators and projects and up to 15 team members, all the way down to their free service that is limited to 2GB of storage, 5 collaborators, 1 project and no additional team members. Other plans are priced at $50, $25 or $15 per month depending on how much data and how many projects, team members and collaborators you require.

When you start working on a project, it will need to be populated with content. That content is then part of the interface, enabling your team to communicate on any given asset, play it back and even compare versions of that same asset.

Currently, Frame.io is compatible with over 400 codecs, including most Quicktime codecs. However, an unsupported codec only means that the video can’t play with the integrated video player. Files that are not compatible will still populate in a project, but collaborators will be unable to do any action that requires the video player to work.

Currently, Frame.io is compatible with over 400 codecs, including most Quicktime codecs.

For video preview, Frame.io creates proxies for smooth Internet playability but retains the native files unchanged for download and sharing. Frame.io touts that their uploads are up to 5 times faster than Dropbox in the US, and in our test we experienced a little over 2 times faster. We admit though, our Internet connection’s maximum upload speed is only 23Mbps and the file we uploaded was 75MB, so the results could be better if our connection did not have a ceiling for the transfer.

Once your data has been uploaded, it’s now ready for review, comment and organization. To review video files, hovering over the thumbnail created within the interface allows for video scrubbing. This feels exactly like Final Cut Pro X (FCPX), and we believe this to be intentional as they have other features that integrate FCPX.

Clicking on a video brings up the video player. Within the video player, you have the ability to add a comment or draw on the video to make a note. As soon as you start typing a note, it pauses playback, and once the comment is submitted, it’s added to the right side of the interface, stamped with the timecode as a task to be completed. Once those tasks are completed, the task can either be deleted or marked as complete.

This is one of the biggest strengths within Frame.io. It removes the need for endless emails describing what needs to be changed. It makes it simple for anyone to add notes as well as draw on and annotate whatever they are describing to allow even more clarity in the communication.

Once you’ve received your comments and you return to your editor and make the changes, a new version will need to be uploaded to Frame.io. This creates a problem — two versions of the same thing. Luckily there is a solution with Version Control stacks. Simply drag the new version over the last one to create a version stack. It indicates a version stack with a number on the corner of the thumbnail. Once a version stack has been created, you can then watch the versions side by side and toggle between the two soundtracks as well.

One thing you can’t do is comment on each video as they are side by side. This isn’t a big issue as you can go into each video separately and add notes, but it would be a nice upgrade to the version stack option. When working with a version stack, you can un-stack the clips if you want to no longer compare them, or if stacking them was done by mistake.

There are only a few more things that Frame.io does, but thats ok, because it combines so many different ways to communicate in to one easily accessed function. You’re able to organize within Frame.io with folders and sort by name, size, type and recent upload. Downloading the source files is easily done with a simple pull down menu.

To use the FCPX integration, the Frame.io app must be downloaded from the App Store. It’s free and just creates an interface that makes Frame.io a destination to share to with in FCPX. When sharing, FCPX gives you options like export just a clip, discard or disable clips, or export clips with markers. Plus, it’ll allow you to export the entire timeline directly to Frame.io. These are great features that aren’t hard to do with other editing applications but it’s just a few clicks fewer when using the FCPX integration.

Overall, we were very impressed with how easy Frame.io was to use. It’ll alleviate communication headaches and allow for better and stronger collaboration between your team, clients or vendors. We’d love to see integration with productivity apps like Slack, Trello or bigger yet, Google’s suite of products.

As an added bonus, Frame.io has great customer service. At any time, you can start a conversation with them about technical issues you might have or how to do something. Best yet, you might even be talking to one of the founders.

Frame.io is for any production team separated by space or time or with clients who require lots of input. It’s also great for anyone who wants an easier collaboration tool than email and video sharing sites offer separately. Should you use it? Sure, but you might find you require a membership plan to do everything you want to do with it. It’s so useful that you might find yourself relying on it more and more.

Communicating with clients and team members can be hard. Sharing versions of edits and video clips all with just a browser might seem like a dream. Frame.io does all of these things and all you need is a computer and an Internet connection.