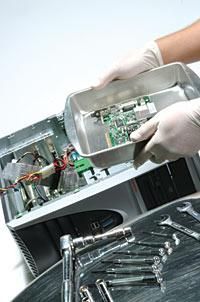 Ever wonder what exactly makes a video editing computer work? Ever want to know what separates the ordinary, game-playing, document-creating PC from the kind that can easily pump out hour-long, professional-looking home videos? No matter if you already own a video editing computer or plan to buy one – it still pays to know exactly what makes this special breed of machine tick. We’ll discuss PCs here, since they are much more dissectible than Macs, but the concepts are the same.

In this article, we’ll take apart a typical video-editing computer piece by piece, much the same way you might have taken apart a hapless frog in junior high science class. Why? To help you troubleshoot problems, increase performance, and make more informed purchasing decisions.

So without further introduction, let’s put on our rubber gloves, grab our scalpels, and get busy.

The CPU (central processing unit) is the heart of any computer. A computer can really do only two things: 1) perform calculations and 2) move or copy information. The CPU does these things; in essence, it is the computer itself on a single chip. A video editing computer needs the fastest CPU available for rendering. Some use two or more CPUs; video editing machines greatly benefit from an added CPU to share the task of rendering video files, even if the software doesn’t explicitly support multiple CPUs.

The motherboard holds the CPU, connecting it to the other parts of the machine. The part of the motherboard that ships info back and forth between the components is called the bus. Video editing machines require motherboards with fast bus speeds in order to handle the immense flow of information that takes place while editing. Faster bus speeds result in faster rendering times. Also located on the motherboard are places to connect peripheral devices – hard drives, video capture cards, FireWire cards and memory. In video editing machines, the motherboard should have a number of open PCI slots for peripheral devices; lots of room to expand RAM; connections for high-speed hard drives; and a bus speed of at least 100MHz.

RAM (random access memory) is a computer’s temporary storage place for information. It’s the place where the software stores and moves pieces of information for processing. A video-editing computer typically has lots of high-speed RAM available – at least 256MB for starters, but often more than a gigabyte. Both speed and quantity of RAM will have an effect on the rendering speed of your computer: The more, and the faster, the better.

The hard drive of a computer is the place where information gets stored in the long term. (Contrast this with RAM, which stores information only until you turn off the computer). When you capture a clip, it writes onto the hard drive. Note that editing computers should have two hard drives – one for the operating system and software, and another solely for video and audio capture and storage. The separate video/audio drive should be the largest, fastest drive you can afford, should spin at 7,200 RPM and should minimally support a true sustained data transfer rate of at least 5MB per second in order to handle the rigors of video editing. And always remember: the amount of storage space on the video capture drive directly relates to the length of video clips you can work on at any one time. You can never have too much space and good drives can be found for as little as $1 per gigabyte.

To edit video on a computer, you need some way to get the video from the camera or VCR onto the hard drive. This is the role of the video capture card (or, more commonly, the FireWire or IEEE 1394 card). A digitizer card can take an ordinary analog video signal and digitize it (change it to a series of ones and zeroes). A FireWire card allows transfer of digital video from a digital camcorder or VCR to the hard drive. Video capture cards vary widely in price and performance, but the only real concern with a FireWire card is whether or not it works and continues working – the resulting video will look exactly the same as it did when you shot it, regardless of the quality of the FireWire card. Some capture cards have special hardware that improves rendering speed and performance during editing.

Editing software is the interface between your ideas and a finished product. Software used in video editing covers a wide range of different types and capabilities, including nonlinear editing, photo and graphics manipulation, audio editing and special effects creation, to name just a few. Once you’ve got the basic system together, the software provides the means to make your video dreams a reality. It’s what you’ll spend the most time learning to operate – and the most time blaming when things don’t work properly – so don’t skimp here; be sure to find the software that works best for your needs.